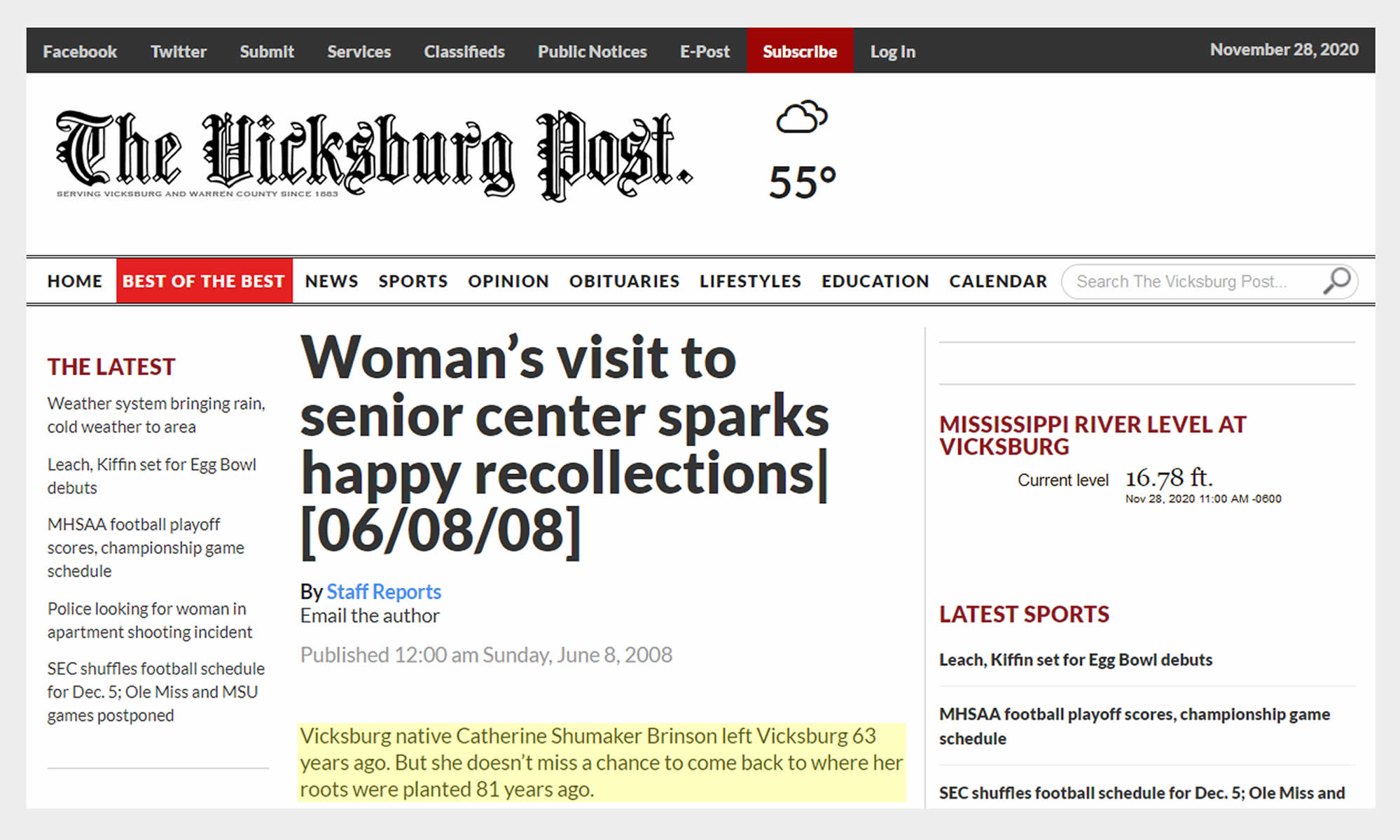 I FOUND AN ARTICLE ABOUT CATHERINE IN THE NEWSPAPER!

More than twelve years ago, in 2008, Catherine Shumaker Brinson took an impromptu trip to Vicksburg, and managed to give an interview for an article in The Vicksburg Post!

Here is that article. Enjoy!

Vicksburg native Catherine Shumaker Brinson left Vicksburg 63 years ago. But she doesn’t miss a chance to come back to where her roots were planted 81 years ago.

Playing in the Vicksburg National Military Park, riding her bicycle on the city’s hills and trying to build “dams” in the hills and hollows around her childhood home are all reminders of her time here and are memories she enjoys sharing.

Brinson, who now lives in Brandon, left Vicksburg after graduating from Carr Central High School in 1945 to attend Millsaps College. Now, frequent visits to Vicksburg, which include several trips to the Vicksburg Senior Center with her 60-Plus Group, bring those memories back.

“When I come over here, I come for the express purpose of driving around and seeing how the town looks,” she said. “And, hopefully, keep the flowers on my parents’ graves.”

Her parents, David and Catherine Shumaker, moved to Vicksburg in 1918, and her father made a career building furniture. Before Brinson was born in 1927, her parents had two boys, Robert Shumaker, now 86, and Edward, 85. When Brinson was 16, the Shumakers had a third son, George, who will be 65 this summer. All the Shumaker children, except George, attended Clay Street School and, later, Carr Central. George, Brinson said, was in the first first-grade class at Grove Street School. The family attended Crawford Street United Methodist Church, one of several buildings on Brinson’s frequent tours that help her map out her history here.

“A few Sundays ago, I asked (two friends) to drive over with me right after church. The three of us came over and I said, ‘Come on, I’ll give you a tour.” Catherine Shumaker Brinson

Another is the house in which she was born, a home at Dabney Avenue and Oak Street. Her father built the house and, though additions have been made over the years, driving by and seeing it continues to take her back.

From that house, you can see the canal. The doctor would come in and check on (us) and then he would check on the river,” she said.

Some of her most fluid memories, though, are of her family’s former home on Baldwin Ferry Road, a house that burned and is no longer there. Still, it is that area that connects her to Vicksburg, a city she said has changed a great deal.

“I really felt free. We lived on a ridge,” she said. “There was so much open area. We were free to roam and climb and dig – and nobody objected. People put up with kids. That was the way it was.”

Mission 66, a road built long after Brinson moved, marks an area where she and her brothers spent most of their time.

“That road went right through one of my play areas,” she said.

The military park, a short distance from where she lived, was a giant playground for Brinson, who, as a child, would ride her bicycle to the Louisiana monument, a feat she says not many people – even today – can accomplish.

Although Brinson said she sometimes hates to see change, she knows it’s inevitable.

“I like the way – for the most part – the city is kept up,” she said. “It’s a pleasant looking city. Growth is the biggest change.”

Living away, even though she’s only about 60 miles from her former stomping ground, has made Brinson lose some of the connections she once had.

“I don’t know anybody over here anymore. I used to have friends all up and down East Clay Street,” she said. “But, to put it bluntly, they’re all dead.”

But, the places and the stories that surround them continue to bind her to Vicksburg, a place she said where she will continue to “drive around and check on things.”

“A few Sundays ago, I asked (two friends) to drive over with me right after church,” she said. “The three of us came over and I said, “Come on, I’ll give you a tour.”

Here is the link to the article: