HENRY HECTOR BRINSON MADE THIS HIGH CHAIR FOR HIS FIRST BABY.

Henry Hector Brinson, known as “H.H.” or “Hec”, was married to Edna Eudora Terrell, and they had six more children after Hazel. All seven of their children, all fourteen of their grandchildren, and many of their great-grandchildren sat in the high chair that H.H. made for his baby girl Hazel.

Before they were married, Edna told her father, Dr. Jasper DeKalb Terrell, that Hector Brinson was her favorite suitor, and that she loved his sense of humor.

The chair he made is fashioned of wood, with a cowhide seat attached using narrow strips of rawhide. At some point, the cowhide began to split in a couple of places, and Edna covered the seat and back with a heavy, fine quality purple paisley fabric. She placed newspaper for padding between the layers of purple fabric.

The chair was climbed on so many times by so many children for three generations that the front rungs are worn by all their little feet.

I hope you enjoyed learning about and looking at photos of this Brinson heirloom!

If you want high resolution copies of these photos, let me know and I’ll be glad to email them to you.

Children of Hector and Edna: 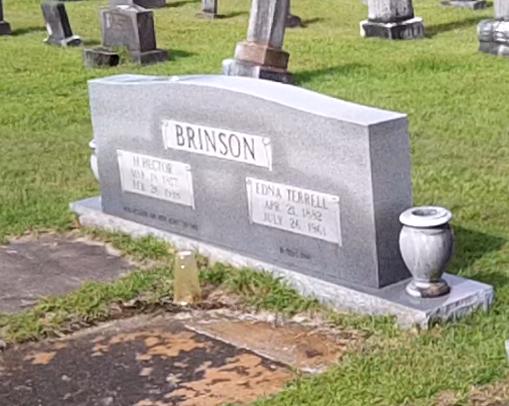