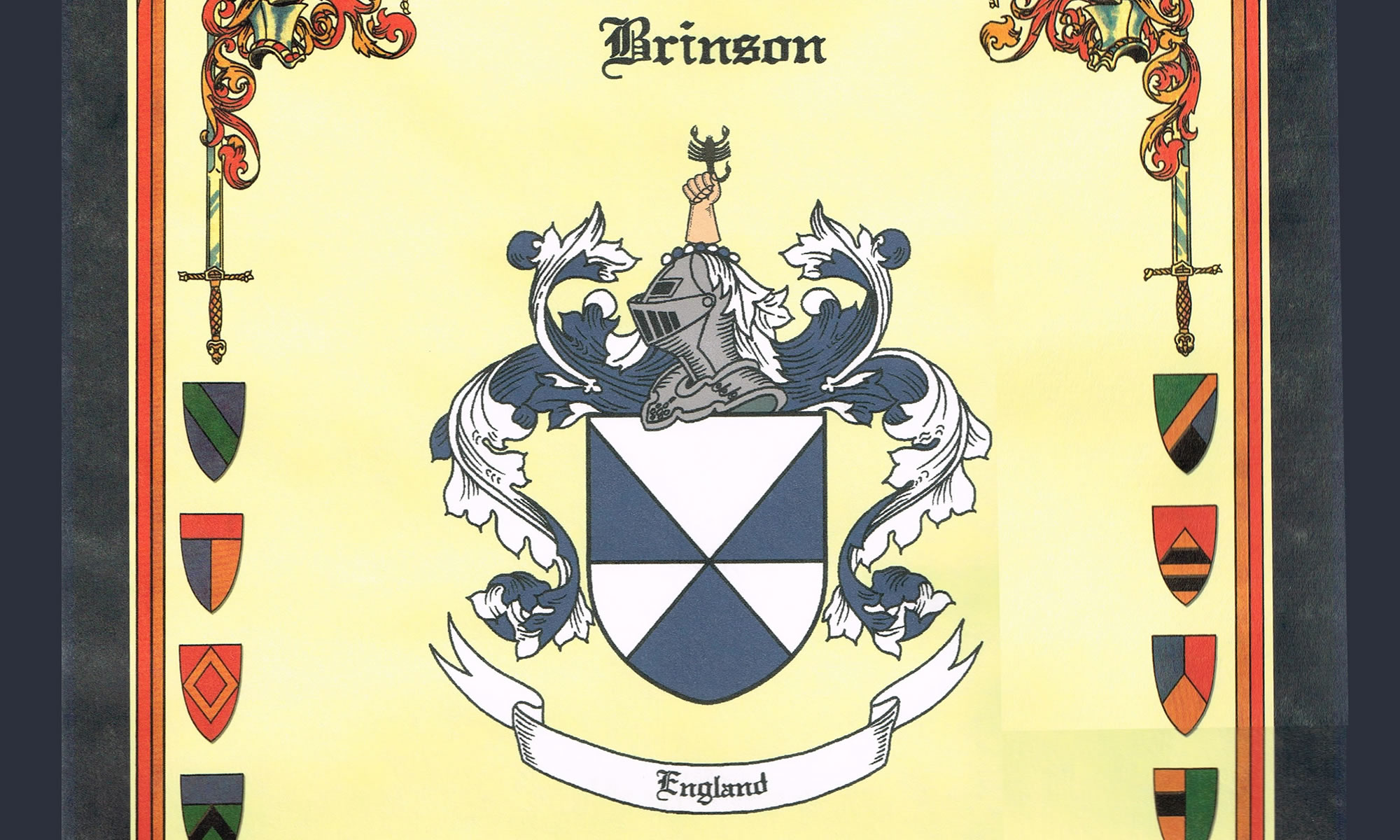 I WAS THRILLED TO FIND THIS BRINSON COAT OF ARMS AMONG MY MOTHER’S GENEALOGY MATERIAL!

There are a number of explanations as to the origin of the English surname Brinson. The most likely is that it is local in origin, being derived from the place where a man once lived or where he once held land. In this case, Brinson originates with a family who came to England from a place called Briencun in Normandy in 1066. In fact, the Norman invasion of England in 1066 exerted great influence over all aspects of English life and, apart from the surname, the Norman “Briencuns” also gave their name to the place in Little Wakering, Essex, called Brimstone Hill. Another, though less likely theory, is that Brinson is patronymic, this time being derived from the first name of a father. Here, the surname would be linked to the popular first name “Brian” and mean, essentially, “son of Brian”. Brian itself comes from the Celtic word meaning “strong”.

Early instances of this surname in England include one John de Brinzun who is mentioned in the Feet of Fines for Essex in the year 1240 and Bartholomew Brinsun who appeared in the Rotuli Hundredorum in the year 1274. The prefix “de”, meaning “of”, stresses the local origins of the name. Other references include the recorded marriage of Thomas Brinson to Joane Hamlin, which took place at the Saint Dunstan Church in Stepney on the 2nd of November, 1626. We read of one Benjamin Brinson who married Ann Howel on the 5th of May, 1718, in Board Chalk, Wiltshire. Also cited is the christening of Susan Euphemia Brinson, daughter of John and Ellen Brinson, which was celebrated in Hampshire on the 19th of August, 1857. Variants of this name include Branson, Brimson, and Brenston.

BLAZON OF ARMS:  Gyronny of six argent and azure.

CREST: An arm from the elbow holding a scorpion erect proper.

TRANSLATION: The arm signifies a Laborious and Industrious person, the scorpion Strength.

I was thrilled to find this, but then I spotted the mistake in its text.

The place in France that the first English Brinson came from is not Briencun in Normandy, because there is no such place, but is Briançon in the French Alps.

It’s well known that William the Conqueror inspired men from all over France to come to Normandy to invade England with him. These renowned Knights of Normandy became the aristocracy of conquered England. In England, they were usually known, not by their original surnames, if they had one, but by the name of the town or village in France from which they had come.

This means that many of their surnames began with “de”, meaning “from”. Therefore, de Briançon is the name of the original Norman Knight or Squire who came from Briançon in France.

Briançon is the highest city in France, and is about 15 kilometers (about 10 miles) from the Italian border. In our current time, it has often hosted starts and finishes of stages of the Tour de France, Giro d’Italia, and Dauphiné Libéré bicycle races.

There’s a lot of information on the internet about William the Conqueror and his Knights and Squires, and about the city of Briançon. If you would like for me to write more about either topic here in our Genealogy blog, let me know.

Do you wonder what those terms regarding the Coat of Arms mean? Here’s an article about that: (Coming Soon) https://www.genealogy.gailbrinsonivey.com/coat-of-arms-terminology/

If you would like to print the image of our Brinson Coat of Arms and Name History for yourself, use 11 x 17 paper. Thicker paper would look best.