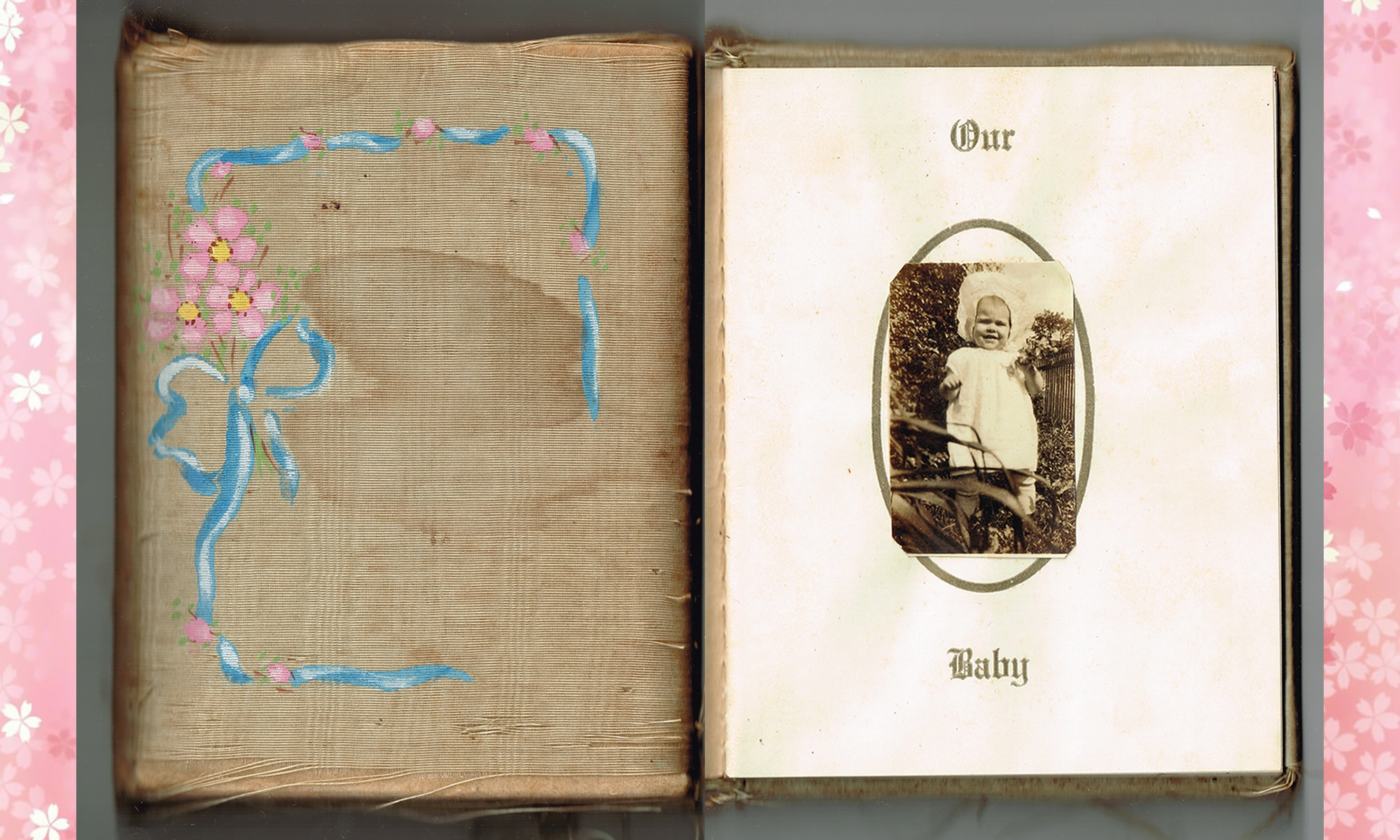 IMAGINE MY SURPRISE WHEN I FOUND CATHERINE MAY SHUMAKER’S BABY BOOK – WITH MY MOTHER’S BABY DATES ENTERED IN MY GRANDMOTHER’S HANDWRITING!

The little book, which measures 4-1/2 inches by 6 inches, is padded with a tightly packed cotton batting, and covered with silk moiré fabric. The fabric has become frayed over the past 9+ decades. I think the silk was probably originally white, but has aged to a taupe color. Painted onto the fabric is a blue ribbon and pink flower design.

In case you’re wondering what moiré is, here is a description from Wikipedia:

The term originates from moire (moiré in its French adjectival form), a type of textile, traditionally of silk but now also of cotton or synthetic fiber, with a rippled or “watered” appearance. Moire, or “watered textile”, is made by pressing two layers of the textile when wet. The similar but imperfect spacing of the threads creates a characteristic pattern which remains after the fabric dries.

In French, the noun moire is in use from the 17th century, for “watered silk”. It was a loan of the English mohair (attested 1610). In French usage, the noun gave rise to the verb moirer, “to produce a watered textile by weaving or pressing”, by the 18th century. The adjective moiré formed from this verb is in use from at least 1823.

I’d like to encourage you to load all photos and documents that you’re interested in keeping to your own flash drive. If anything happens to me, this website and everything on it will eventually disappear.

If the file name ends with “scaled”, such as this: baby-book-catherine-may-shumaker-1-scaled.jpg, that means that my website decided that the file was too large and automatically made it smaller. If you want any specific high resolution image for your files, let me know and I’ll email it to you.

Here are photographic scans of all the pages of Catherine May Shumaker’s baby book. Some pages don’t have personal entries, but I’ve included them anyway. That way, you’ll have the complete book if you choose to print the images on photographic paper to save for yourself (hint hint). Put them in page protectors in a ring binder the way that Catherine used to do when giving us the images that she wanted us to have.

As soon as I saw this baby photo on the first page, I knew that it was Catherine’s baby book. I’ve seen other photos of her as a baby wearing this huge bonnet!

Catherine Edna May Shumaker’s handwriting on these pages makes the book even more special!

We’ve found a blessed Baby
That in the night-fall came
All unannounced from Heaven,
Without a card or name;
The angels must have brought it here
For us to love – Our Baby Dear!

I remember, I remember,
The house where I was born,
The little window where the sun
Came peeping in at morn.

Of course, I had to google “522 Dabney Avenue, Vicksburg”. The house is still standing, on the corner of Dabney Avenue and Oak Street, and about a block from a railroad track (Vicksburg Southern Railroad) that runs along the Mississippi River.

Here are some screenshots: 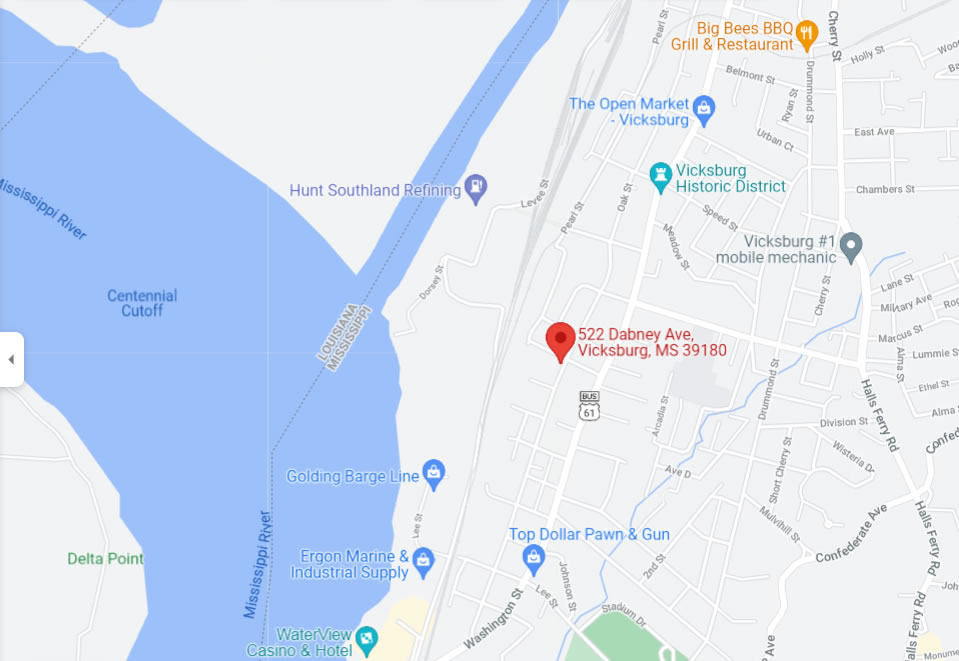 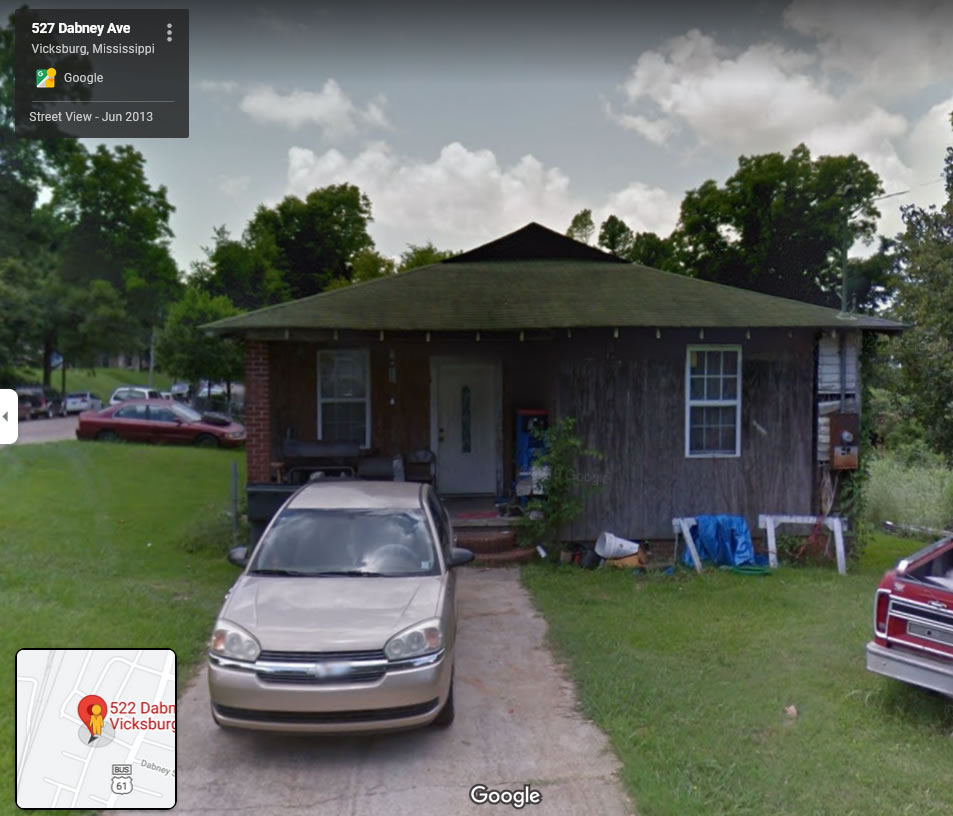 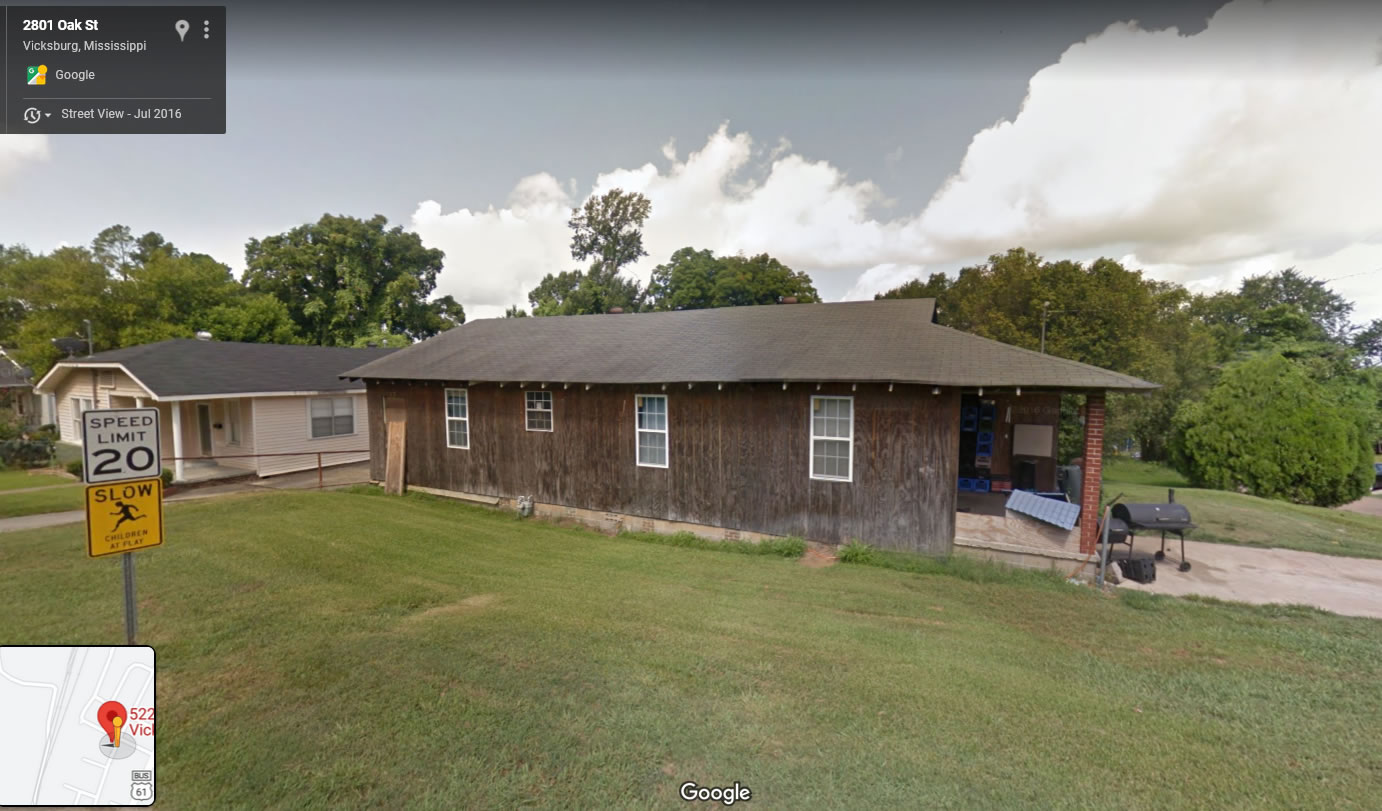 Now that we claim it,
What shall we name it —
Rosiest, cosiest lamkin Pet?
Something alluring,
Something enduring,
Best of all titles we’ve heard of yet.

Every grain of gain is noted,
Every scratch of the scale so fine —
What’s the use when the precious bundle
Far outweighs a rare gold mine!

Measuring Baby, that bundle of sweetness,
How can one measure such measureless charms!
Ne’er was a baby such pink of completeness
Rose-cheeks, and sweet eyes, and fat dimpled arms.

Better a home with a baby,
And floor all littered with toys,
Than one that is empty forever
Of childish prattle and noise.

It were a noble tree
To shoot forth such a bud.

We bring thee gifts, so rare and fine
Wrapped with a love that is all thine,
But the gift thou givest, precious elf,
Is costlier far — thou givest thouself.

“Mr. and Mrs. C.W. Walter” were Charlie and Annie Melissa Parmenter Walter. Annie (who later changed her name to Anna) was the sister of baby Catherine’s grandmother Ada Parmenter May, which made her the great-aunt (“Aunt Anna”) of baby Catherine. Anna was born in November 1888 in Lamar Colorado, and so was eight years younger than her sister Ada.

Mother told me one time what “suspenders” were, but now, I honestly have no idea. I know that I’ve seen those silk booties somewhere among my mother’s things, but don’t know where they are now. When I run across them, I’ll put a photo of her actual ones right here. In the meantime, here’s a photo from https://www.1860-1960.com/xs0494p0.html of what they look like: 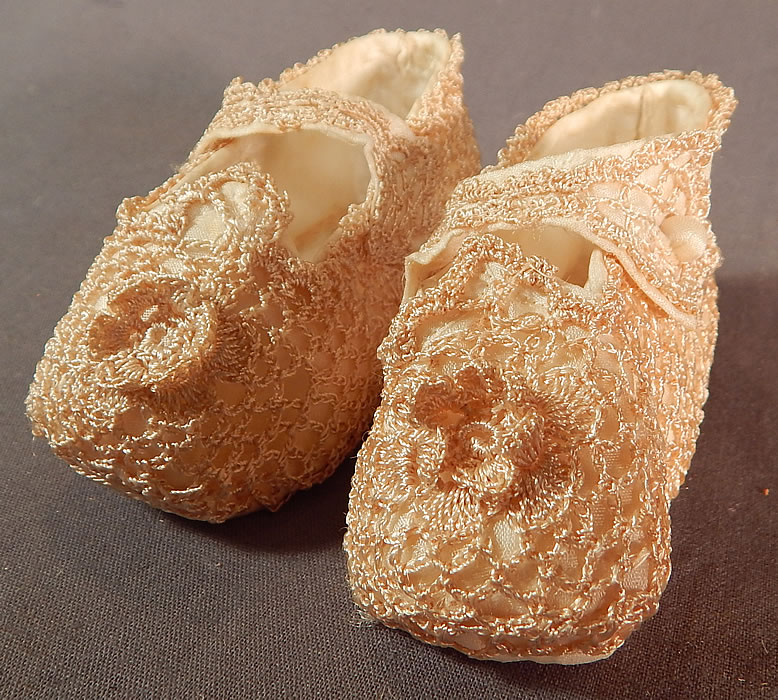 Hear the birdies singing,
Listen what they say —
“Here’s a new, new Baby
Coming out to-day.”

I wonder where they went on little Catherine’s first outing?

During the times that little Catherine was born, all babies, boys and girls, wore long gowns. Only after they started creeping, were they dressed in shorter clothing, so that they could creep around without tearing up or tripping in their long gowns!

Here a dimple, there a dimple,
Rose-leaf flushes peachy pink;
Surely not a charm is lacking —
Baby’s perfect, don’t you think?

I wish the actual picture were there, not just the date. Catherine is standing on her own in the one at the beginning of the book with her wearing the bonnet. Hopefully, I’ll find one that looks like it was taken when she was about three months old. If so, I’ll add it right here.

All homage to the King, this day of days.
For he holds his court and seeks thy praise;
Each tribute fair he will requite
With crows and gurgles of delight.

Catherine lacked about two weeks of being a year old when she took her first step.

1st tooth arrived when she was 6 months and 11 days old.

Sweet childish days, that were as long
As twenty days are now.

A dreary place would be this earth
Were no little people in it;
The song of life would lose its mirth
Were there no children to begin it.
– N.P. Willis

Be sure and let me know how you enjoyed seeing Catherine’s Baby Book! Thank you for reading.