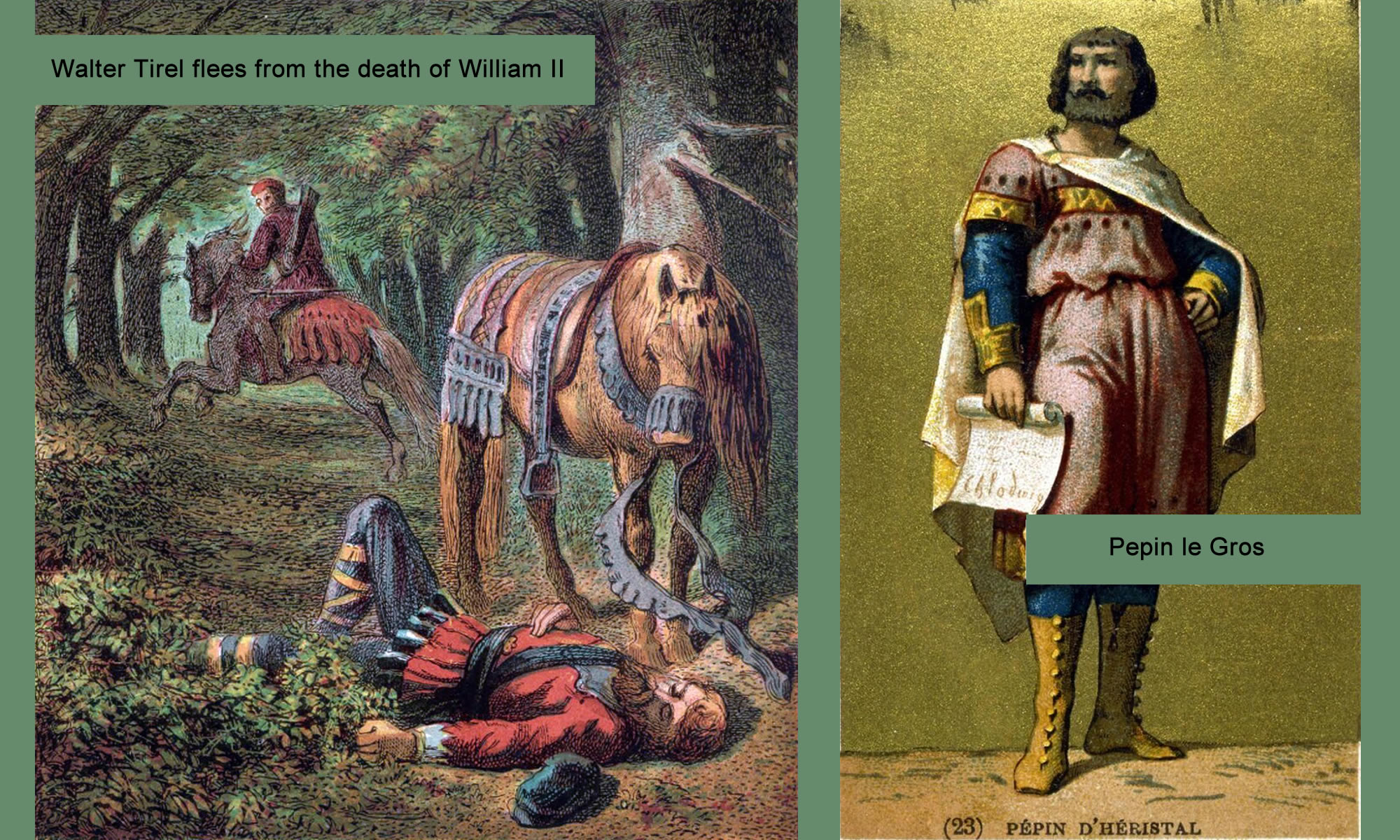 SOME OF YOU HAVE ASKED ME RECENTLY WHO OUR DIRECT LINE ANCESTORS – TERRELL – ARE. AND THAT’S SOMETHING THAT I CAN DO WITHOUT GOING THROUGH TOO MANY MOUNTAINS OF MY MOTHER’S INFORMATION!

Our Terrell line goes back a really long way! Because the Terrells were nobility in England, and before that in France, there were wonderful records kept of their births, christenings, marriages, titles of nobility, and deaths. Frequently, we also know what they did for a living and where the house was that they lived in.

This great record-keeping makes it possible to go much farther back in our Terrell direct line than in our other lines.

If you’re a certain kind of history buff, you might recognize the name on generational line 28, Walter Tirel. Yes, we are directly descended from the man who (accidentally) killed King William II of England!

In progress is my series of researched articles about our Terrell line. In the future, one of those articles will be about Walter Tirel and this event.

Here is the first of the researched Terrell articles, “Terrell Family in America”:  https://www.genealogy.gailbrinsonivey.com/terrell-family-in-america/
Here you’ll find a lot of information about each ancestor listed under the heading “Our Terrell ancestors in America” below. You can follow links in the article to find even more information.

This list will start with Ralph and Catherine Brinson. If you don’t know how you’re related to them, contact me and I’ll help you figure it out.

Our Terrell ancestors in America:

Our Terrell ancestors in England:

Our line continues on French and British genealogy sites, and has been carefully researched and confirmed by English historian Joseph Henry Tyrrell (born 1869) of London and by members of the Terrell Society of America, Inc.

Well known English historian J.H. Tyrrell wrote a number of books, which are considered to be the most accurate and well-researched Terrell information available in the world. Here is a link to a list of his writings:

I’ll make it a point to write another Terrell article or two soon, with all the information available from J.H. Terrell and other research on the following ancestors. The remainder of the names on this list, both in England and France, are from his publications.

Our Terrell ancestors in France:

There’s another name on generational line 42 that you might recognize if you’re a history buff. Pepin le Gros, the man who came close to uniting all the various warring Franks during the Middle Ages, was our direct ancestor!

33. Walter I, Count of the Vexin, and Amiens m. () Eve, daughter and heiress of Landry, Count of Dreux

35. Terric (too young at his father’s death to inherit titles)

37. Eccard, Count of Autun and the Vexin

38. Childebrand II, Count of Autun and the Vexin

40. Nivelon I, Count of Auton, Macon, and the Vexin

41. Childebrand I, Duke of Burgandy, son of his father’s second marriage to Alpais

Read more about him here: https://www.wikitree.com/wiki/Pippinid-3

87. Anterior, King of Cimmerians, a people inhabiting the shores of the Sea of Asao, now known as the Crimea. Lived before Christ, year 443

This is our entire list of Direct Line Ancestors – Terrell – as will ever be known.

Okay, I take that back. Just googled “Anterior, King of Cimmerians”, and there’s some information about him, including his parentage. I’ll have to look at that information later to see if it looks real – now it’s after midnight!

Let me know what you think in the comments below. 🙂