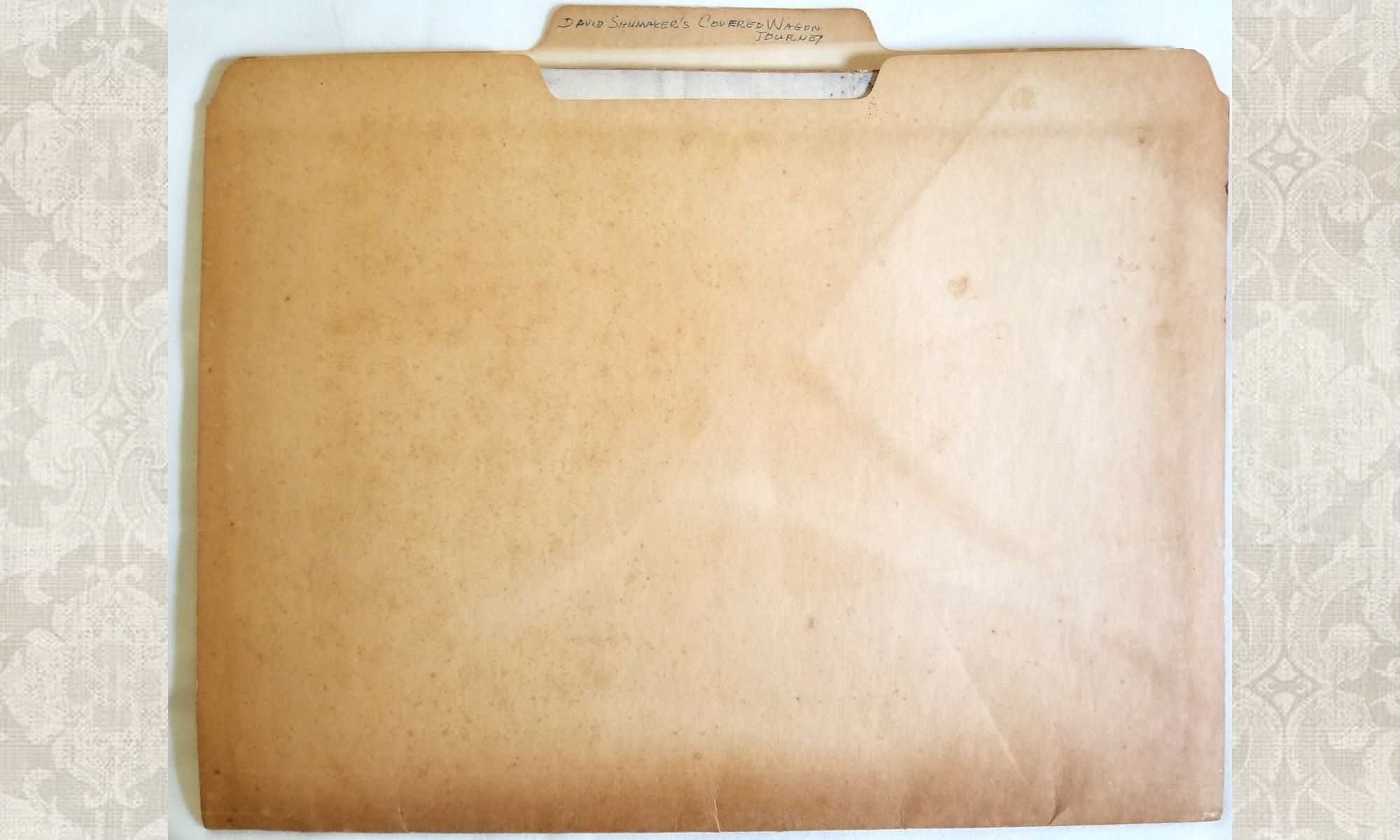 Get your own full color keepsake paperback – Book 1 of Catherine’s Genealogy Series!
LOOK WHAT I FOUND IN MY MOTHER’S THINGS!

I remember Mother telling me that she had repeatedly asked her dad, David Jesse Shumaker, to write for her an accounting of his trip from Indiana to Florida in a covered wagon. But I don’t remember ever seeing this folder before, or hearing the true story that he wrote that’s contained in the folder. Maybe I did, but I don’t remember.

When I saw this, I immediately I knew I had to make it available for you. So I’ve transcribed his narrative to make it easier for you to read. For historical authenticity, at the end of my transcription are photocopies of my grandfather’s original typed account of traveling in a covered wagon.

Here are three ways to get the whole story, I TRAVELED FROM INDIANA TO FLORIDA IN A COVERED WAGON:

2. Get your own full color photo quality document-sized keepsake paperback with matte finish to enjoy. Get extras as heirlooms for your children.

3. Kindle version, if you want to read it on your device.

Even if you’re not on the Shumaker side of my family, this is an interesting historical perspective of travel in the year 1899-1900. I’ve updated some of his spellings to make it easier to read for modern readers, and included photocopies of his original typed version for historical authenticity.

My grandfather always went by the name “David”. As an adult, he dropped the name “Joseph”, and was known as David Jesse Shumaker. When his daughter Catherine asked him why he chose to drop Joseph instead of Jesse, he replied, “I like the initials D. J. better than J. D.”

David Jesse Shumaker would have been four years old at the very beginning of this accounting, turning five shortly thereafter.

Here’s the first page of David’s story of his family’s journey:

I TRAVELED FROM INDIANA TO FLORIDA IN A COVERED WAGON.

My first memory of my mother was that she was very sick and that I was very frightened. This was the winter of 1898–1899. The house was full of relatives and friends. There was a kind of whispered silence that filled the house with a feeling of coming disaster.

The Doctor told Daddy that he should take mother south where the winters were not so severe, as it was his belief that the winters of Indiana were too cold and damp for her, and that was the reason she had these sick spells every winter, and they were getting worse every winter.

We lived in the hills of Indiana. Daddy ran a cross-roads country store, one of those old time stores where you could buy any-thing from a hair-pin to a barrel of flour.

We lived in a house built of hewn poplar logs, with a huge fire-place made of field-stones. There was the barn, the storage shed, the smoke house, the spring house and the ever present ash hopper, where the hard wood ashes were used to make lye to be used in soap making.

Daddy farmed a bit, made brick, cut lime-stone from an ancient quarry on the place, ran a small saw-mill and did building and construction work.

Early in the spring of 1899 Daddy made a light van type frame to fit the wagon box covering it with canvas. Mother said she would like to go to Florida, and that she would like to drive through. Her father had made several trips out west hauling freight. She said, “We will drive all the way from here to Florida and I will get well.” So Florida was our destination.

Order your own book to read the entire account! Here are those links again:

6 Replies to “I TRAVELED FROM INDIANA TO FLORIDA IN A COVERED WAGON.”