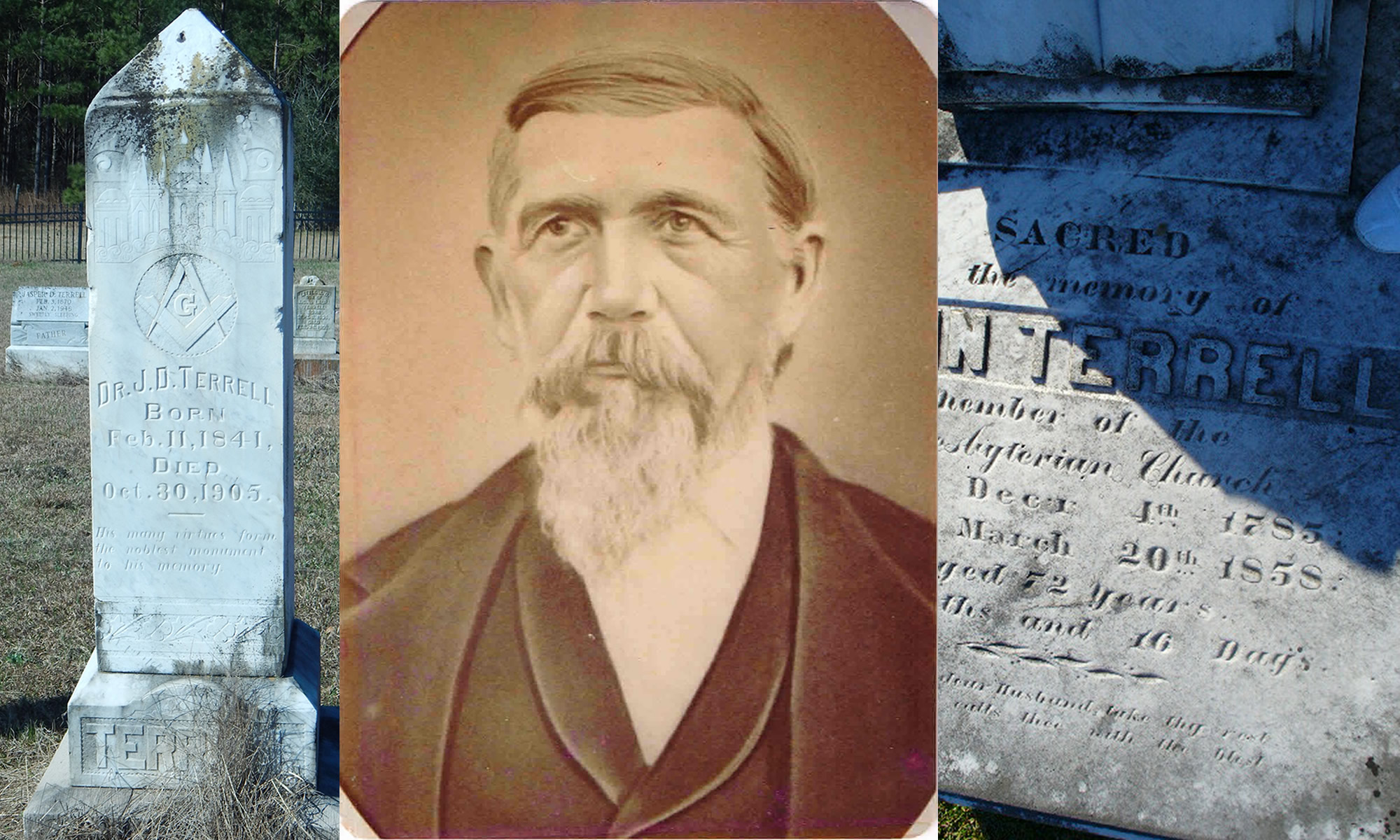 RECENTLY, I WAS LOOKING FOR THE HISTORY OF OUR TERRELL FAMILY IN AMERICA, SO SEARCHED “TERRELL” ON GOOGLE, AND WAS SURPRISED TO FIND THE “TERRELL SOCIETY OF AMERICA, INC.”!

The Terrell Society, which had addresses in Cairo GA and Charlotte NC, is sadly now dissolved.

But even more surprising than the discovery of the Terrell Society itself was the wealth of information that they had. And that the main officer’s name was Daniel F. Brinson, which just shows that the Terrells and the Brinsons had an affinity for each other, even among those who never migrated to Mississippi, but stayed in North Carolina and Georgia.

In this article, I’ll be following our Terrell male line back from my great-grandfather, Dr. Jasper DeKalb Terrell, to our first Terrell family in America, Richmond Terrell.

Edit 12-22-21 – I decided to renumber to start with my father, Ralph Brinson, in order to make the information more relevant to the younger generations. Most of them remember their Grandaddy/Uncle Ralph.

So, Number 1 in our generational count will be Ralph Cranford Brinson, the son of Edna Eudora Terrell Brinson and Henry Hector Brinson.

Edna Eudora Terrell will be number 2.

Jasper DeKalb Terrell will be number 3 in our generational count. This is the opposite direction that genealogists usually go, as number 1 is typically the farthest back known ancestor. However, I haven’t counted back to find out how many generations of Terrells can actually be proven – but this I know – there are a lot! Maybe I’ll change the numbering when I actually get to the end of the line, so to speak. Or maybe not.

Update 12-22-21 – Eighty-seven… that’s how many generations of Terrells have been proven in our line, to the satisfaction of British and French historical societies! Here is your link to the complete list:

Hopefully you all know how you relate to Ralph, or to Edna, or to Jasper. If not, contact me and I’ll help you figure it out.

Children not listed, because I’d rather not post names of living people. Contact me if you want to know. Thanks!

Edna Terrell Brinson told my mother, Catherine Shumaker Brinson, that the first seven listed here are the children of Jasper Dekalb Terrell’s brother, who Jasper and Sarah took in after the children’s parents were killed in a tornado. The second seven (the ones with an *asterisk*) are Jasper and Sarah’s biological children.

When I locate my mother’s Terrell genealogy research, which includes information from Edna Terrell Brinson, I will make whatever corrections above are necessary. If you know of any corrections needed in the meantime, just let me know.

Later, I’ll write another article about Jasper and Sarah, as there is enough information available about them for their own article.

I have seen his middle name listed variously as Philemon, T., and M. If anybody knows and can document what his middle name actually was, please let me know so that I can correct it here.

Later, I’ll write some more about John and Polly, as there is some information available about them.

More information is available about Philemon Terrell, Sr. and his activities in Virginia. I’ll write more about him later.

The information below comes primarily from the book “Terrell Genealogy” by Emma Dicken, published in 1952. It is considered to be the best and most accurate Terrell research that exists.

Look for another article later about our ancestor Philemon Lafayette Terrell, Sr.

One source lists him as a “Planter in Polecat Swamp, St. Margaret’s Parish VA.”

Look for another article later about our ancestor James Nimrod Terrell.

Look for another article later about our ancestor William Terrell, Sr.

8. Richmond Terrell, Immigrant – the First of our Terrell Family in America

Next installment in our Terrell line (after I finish the six articles about the above Terrells)- Terrells in England. Look for it!

6 Replies to “Terrell Family in America”