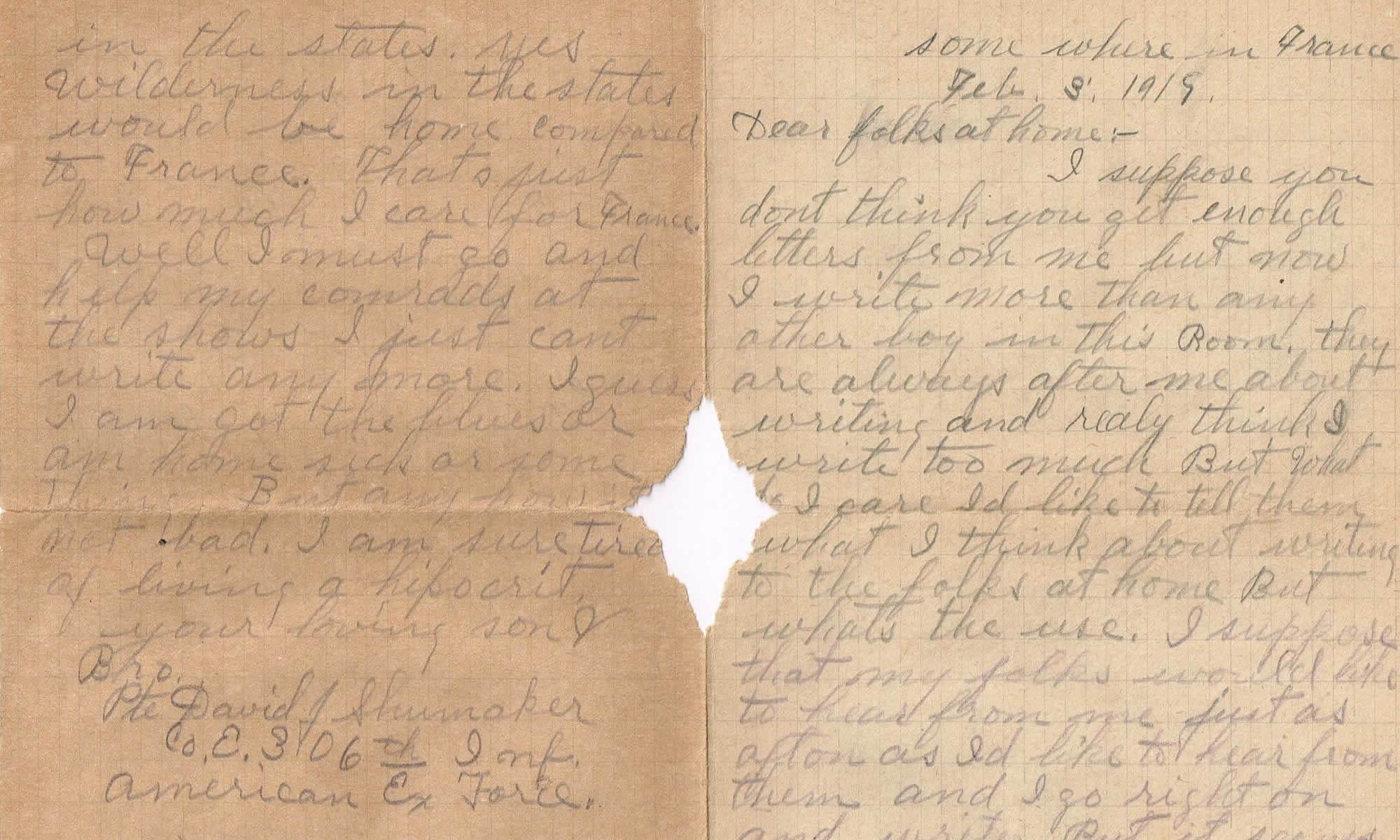 IN DAVID’S WWI LETTER OF FEBRUARY 3, 1919, HE TALKS ABOUT HOW MUCH HE WRITES TO THE FOLKS AT HOME COMPARED TO THE OTHERS IN HIS COMPANY.  HE SAYS THAT HE WRITES JUST AS OFTEN AS HE WANTS TO HEAR FROM HIS FAMILY!

I suppose you don’t think you get enough letters from me but now I write more than any other boy in this Room. They are always after me about writing and realy think I write too much. But what do I care I’d like to tell them what I think about writing to the folks at home. But whats the use. I suppose that my folks would like to hear from me just as often as I’d like to hear from them and I go right on and write. But it seems that the most of the boys don’t care what their folks would like just so they hear from them once a

month it’s all right. They don’t even seem to care to hear from their own people. And as to writing to their parents I know of a few boys that have not even wrote to their mother in a couple of months. Then they rag me about writing. Oh such as that don’t amount to anything. I don’t even worry about it myself. But you should be glad even that I can write and will use my head enough to send a few words once in a while. For now you are getting more letters from me than any other Boys mother and Father sister & Bros, are getting from their boy over here especially in this

Company with the exception of one other boy and he is just the same as I am about writing. He likes to write and is willing to use his “gray matter” a bit.

I know I’m getting a “sorter” of a “don’t care” disposition and perhaps a bit hard boiled too but a boy has to be just as hard and stiff as a fourty penny spike. Also has to have a scrap now and then to get along in the army. If he was just good natured and let evry body ride him soon he would be a miserable wreck. I know of one in this company. I tell you a fellow has to be a lot that he wouldn’t be if he were not a soldier.

The trouble is that so many boys found a home when they were drafted in the army. Still they are not satisfied. They have to raise h— in general quite often. But as a rule you find the Boys are all just like a bunch of small children in their ways. They sure remind me of that. All of the boys want to see U.S.A. They all say “when we get home” but the most of the mean when they hit the States once more.

Well From all apperences of things right now we leave for some where in the next few days. I heard that we moved some time between the seventh and the fourteenth.

But where we go I don’t know. But we hear we go to a town near the seaport. Some say we go direct to a seaport others say we go to a camp near a seaport and stay there for a while. Some rumors say we get to the states about the first of March. But all this is just rumor. And no confidence can be put in such stuff. They are what were all “unofficial reports”.

I am on the “fire squad” now Not the fireing squad for we carry no rifles but the “fire squad”. It is something like a fire department. See? Have been wondering what will take place when I get home. I dream of home quite often.

But they never come out right. I only hope I can arrange things like I want to when I get to the states and before I get home. I’ll not build any air castles tho, and not be too anticipating and I’ll not be disappointed. I’ll not expect any thing to work out like I want it to. Always look for the worst and then if the best comes its more enjoyable. That’s the way we are. Us boys all have a lot of fun telling the other boys (the ones that always believe evry rumor) all the latest news (and realy sometimes we make news our-selves just to hear the other boys houl) is manufactured right in the regiment.

We call such stuff “Latrine dope” or “toilet news”. Some stuff starts and spreads like wild fire. Well we are going to have a Regimental show in town tonight and I’ll have to go keep the fires going. That is the fire squad will have to also guard special seats for officers & keep order etc. Such is our lot when we have any thing swell in town. But we get the best seats any-how.

We have lots of fun but some times I go to sleep and and just wish I could wake up at home, that’s just how I feel. Or some where out in the wilderness.

in the states. Yes Wilderness in the states would be home compared to France. That’s just how much I care for France.

Well I must go and help my com rads at the shows I just can’t write any more. I guess I am got the blues or am home sick or some thing. But any how it’s not bad. I am sure tired of living a hipocrit. 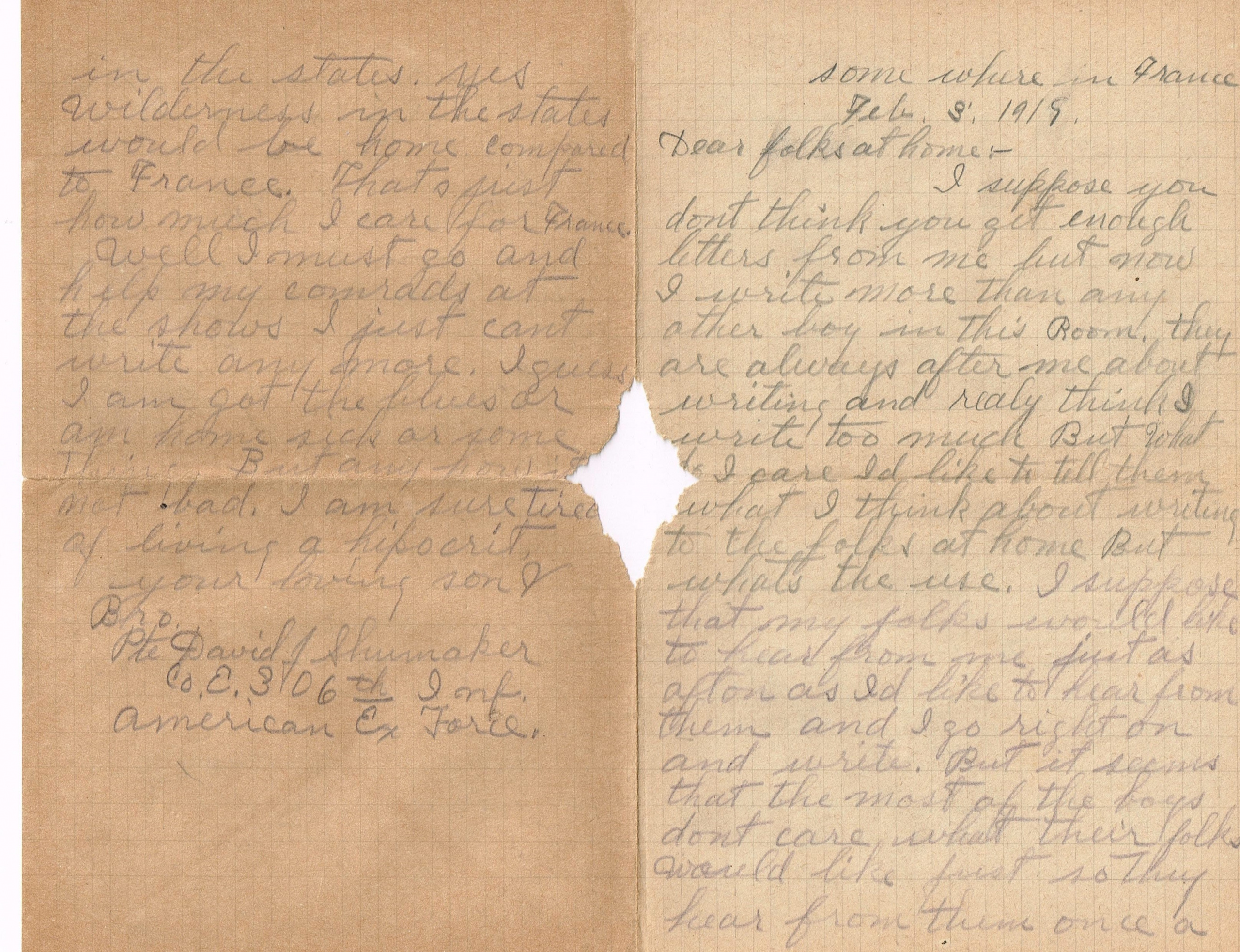 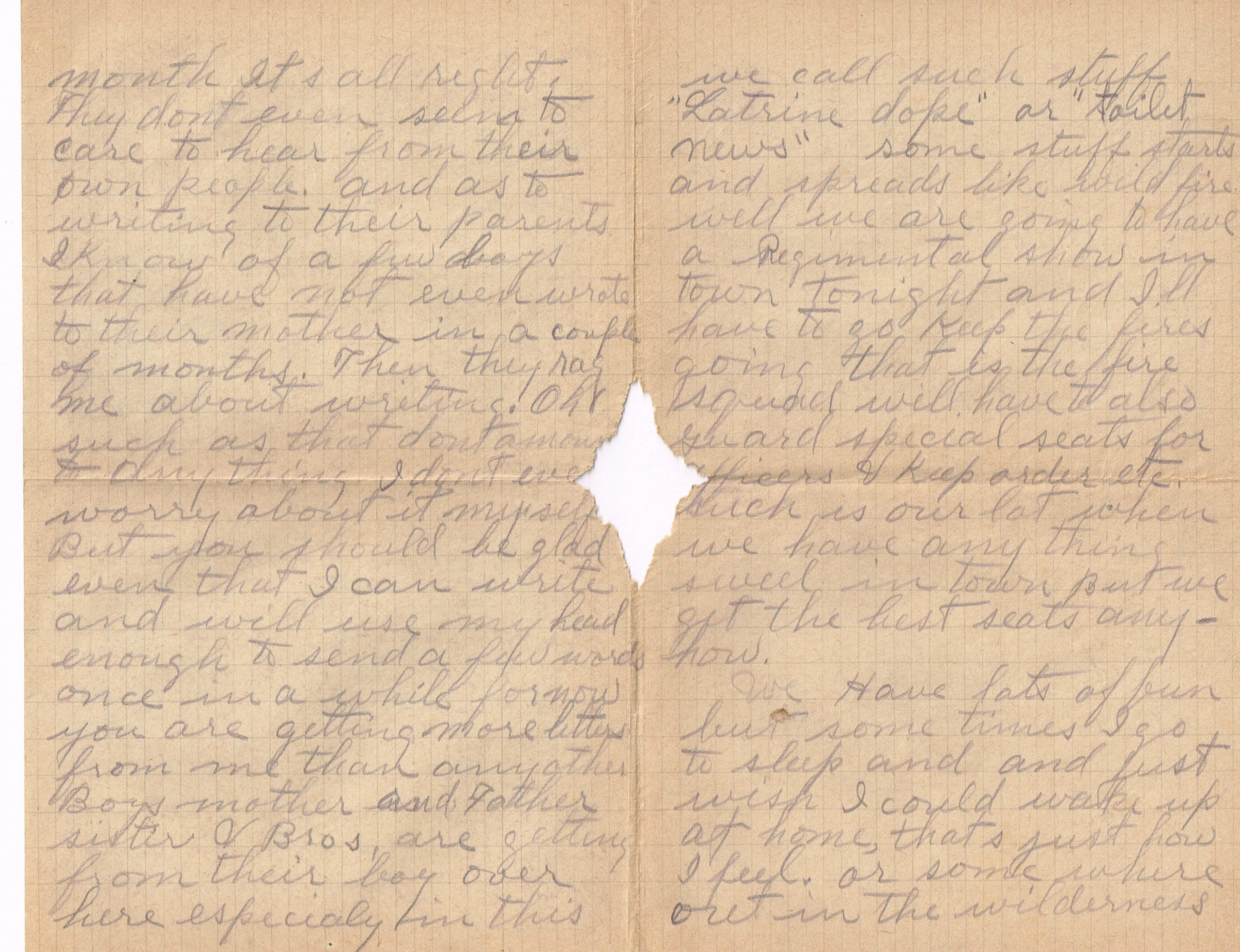 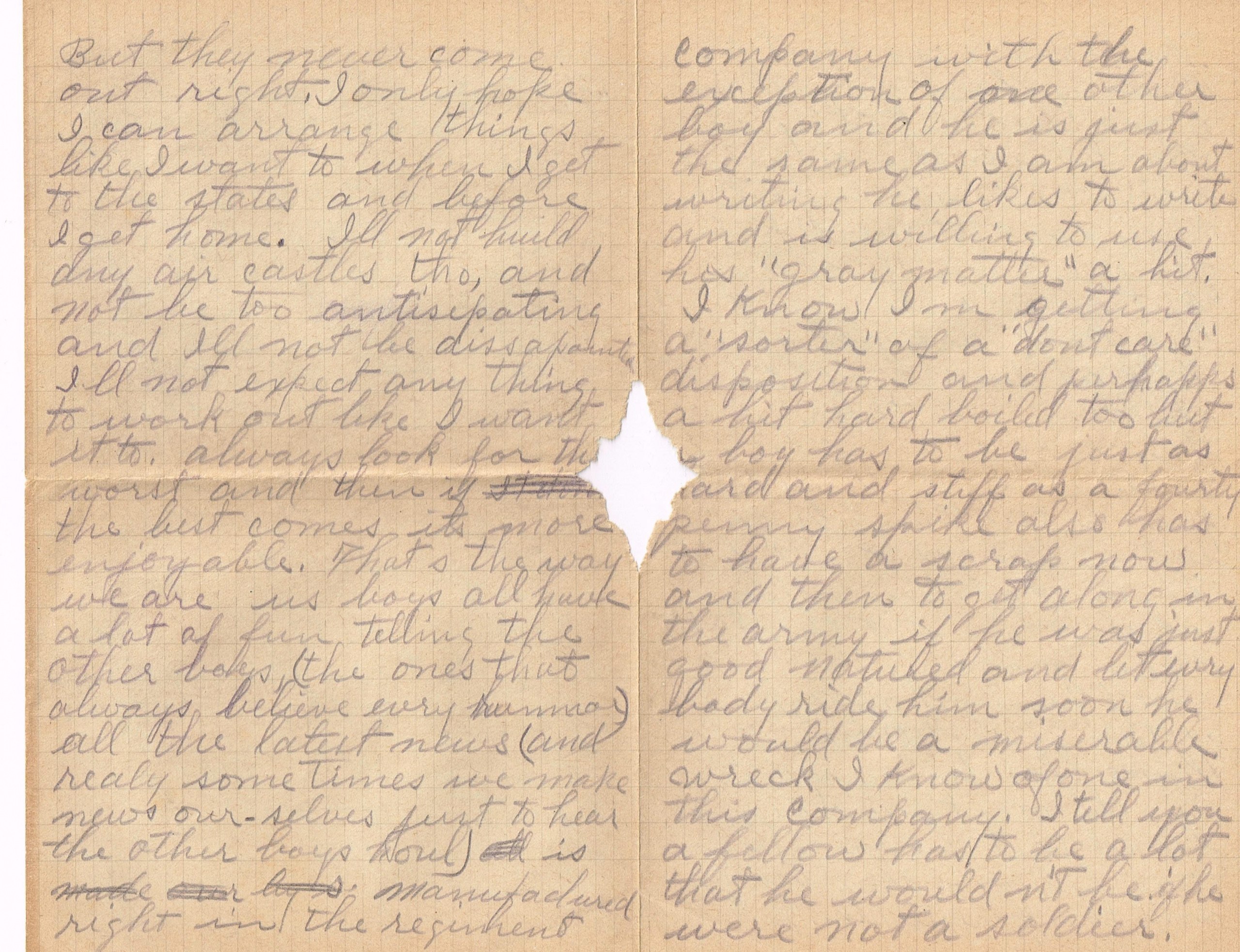 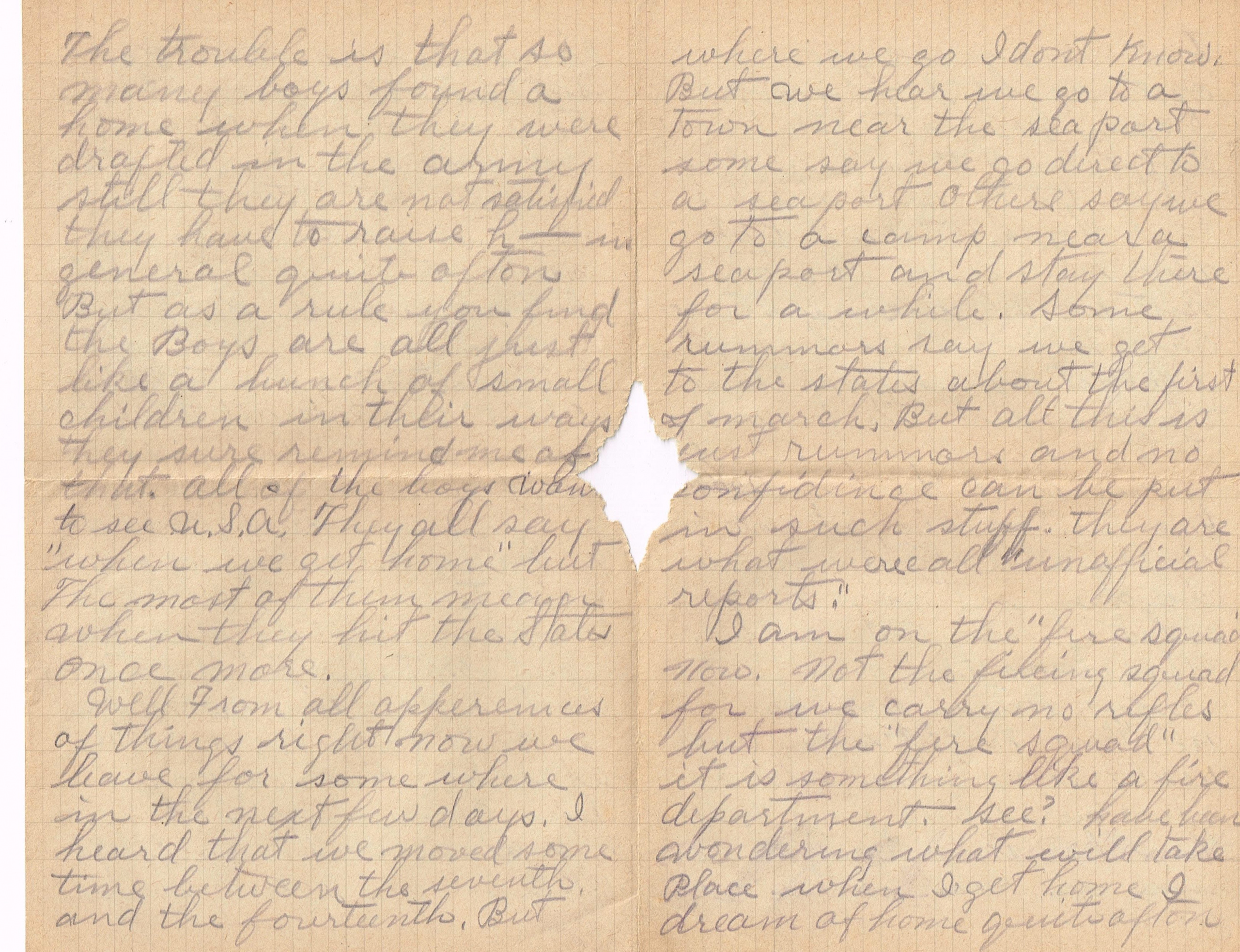 Did you enjoy this post with the WWI letter of February 3, 1919 from David Jesse Shumaker to his family back home? Let me know in the comments below!