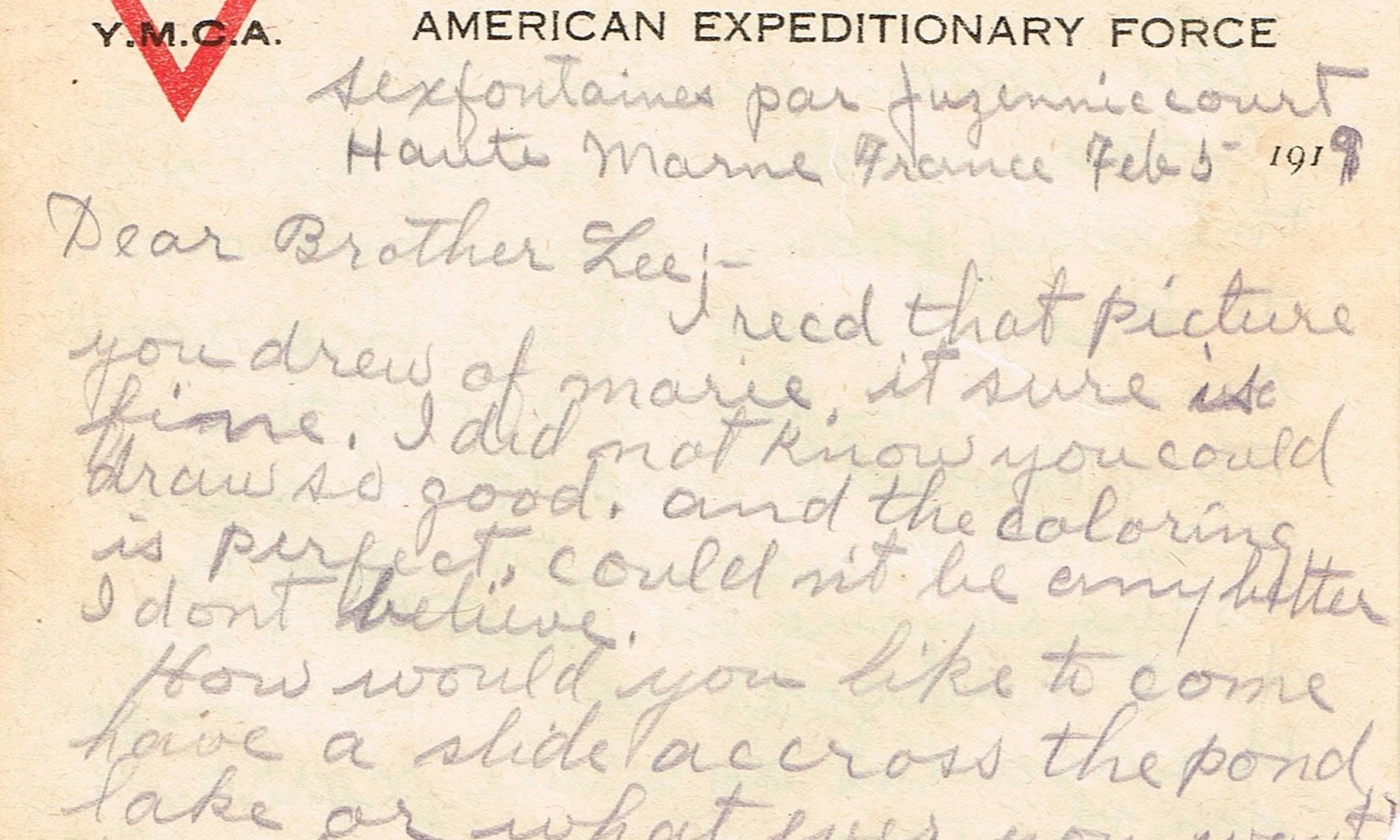 He congratulates Lee on the quality of his artistic abilities, and tells Azel about where he is, letting her know not to expect any souvenirs from France!

I rec’d that picture you drew of Marie. It sure is fine. I did not know you could draw so good. And the coloring is perfect. Could not be any better I don’t believe.

How would you like to come have a slide across the pond, lake or what ever you want to call it with me? Its great sport especialy when your shoes soles are filled to the brim with “hobnails”. And steel plates or “horseshoes” as we call them on the heels.

I’ll tell you a little about this town: it is on the road from Charmont to Columbay, and is just like so many other small French villages. Going from Columbay to Chaumont, just five kilometers after you pass Juzennecourt there is a curve in the road and a woods on the right side of the curve. By the way the road curves around the woods, making the road run on two sides of the woods. It is up hill all the way from Juzzennnecourt to these woods. Then the road runs on a level along the top of the hill. This town is just a wide place in the road, as the saying is. But that saying don’t hold good in France for the road is as a rule narrower in the town than it is in the country.

The town of Sexfontaines is strung out about a Killometer (five eights of a mile). There is no Post office at Sexfontaines so they hook “Par” on it and add Juzennecourt. That is where the Post office is. And “Par” stands for town or a French word that means town or district.

There are no Farm houses in this part of France. The Farmers all settle in noe little village and then they tend the ground around the town. I have walked for days and never seen a farm house only in these little towns. And nearly always they are on a hill if it were possible.

This part of the country is very hilly. But not small hills. All are big like rolling mountains. The French women all have one Place to do their washing at. At the foot of the hill this town is on is a big spring. And they have built a house down there about fifty ft. long and twenty ft. wide and in they have a pool about eight ft. wide and fourty ft. long. The rim of the pool stands up about a foot from the floor of the house. The wter in the pool keeps up a circulation all the time some running in some out.

The women take their clothes down there, they have a box with three sides and a padded bottom to kneel in and they go to work on their knees. They also have a paddle to spank the clothes with too. I don’t like their way of washing its hard on the back.

Well I guess I’ve told about enough about the French People and have not told anything about this villate. At Present its cold as —- here and the town is covered with snow all but the manure piles and they are renewed every day and they sure loom up in the snow.

So long. Hoping to see you in the next year or sooner.

Some where in France
Feb 5

I guess I’d better write a few lines to let you know how I’m getting along. We are going to move soon and it will be some time before I’ll get the time I mean the chance to send out any more letters.

This leaves me feeling Very Well. Have had a bad cold but that’s nothing this time of the year. I hope you are well. We have been having some very cold weather the last month or so. There’s snow on the ground now and has been for near a month. Beofre the snow fell the ground had been froze for over a week. The sun shows its self nearly evry day; but still it stays froze solid!

They tell us we are going home very soon. One officer said, “I tell you men you are going sooner than you thot.” But we were told we were going home by Xmas – But did not. We landed here in this Village on Dec. 4th. Just two months ago yesterday. We did not think we would stay here but a few days, but, we’re still here. I realy have quit studying about leaving here. When the time comes we will all rejoice.

The most of this division is made up of New York men. And a lot of them are from New York City. So you know they are anxious to get across the Pond for when they get to the states they’ll be right close home for they will go to Camp Mills and that is not far from the City.

I don’t know what camp I’ll to go, Camp Mills first so they say then to Camp Pike. And it may be a couple months after I get to the states before I can come home.

They say we boys get a thirty day furlow after we get back to camp. If so we will have a chance to come home, for a few days.

But all this is just news paper dope and don’t amount to any thing when it comes right down to real stuff.

You need not look for me to bring home any souviners, at all. For I have enough to carry with-out any extra stuff. For my full equipment will weight a hundred pounds or more I believe.

Well heres wishing you all the good luck you could wish yourself.

Your Brother in France. 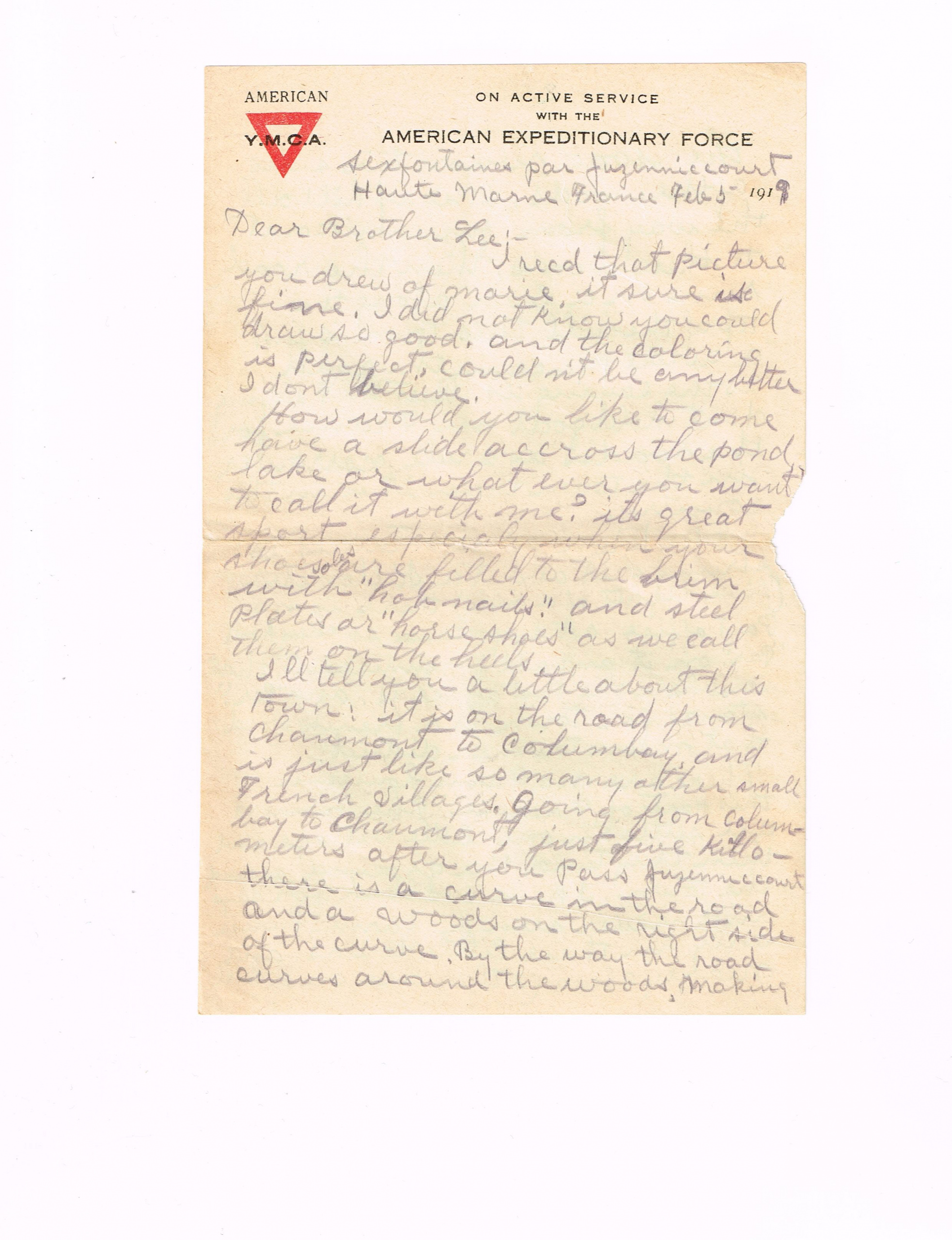 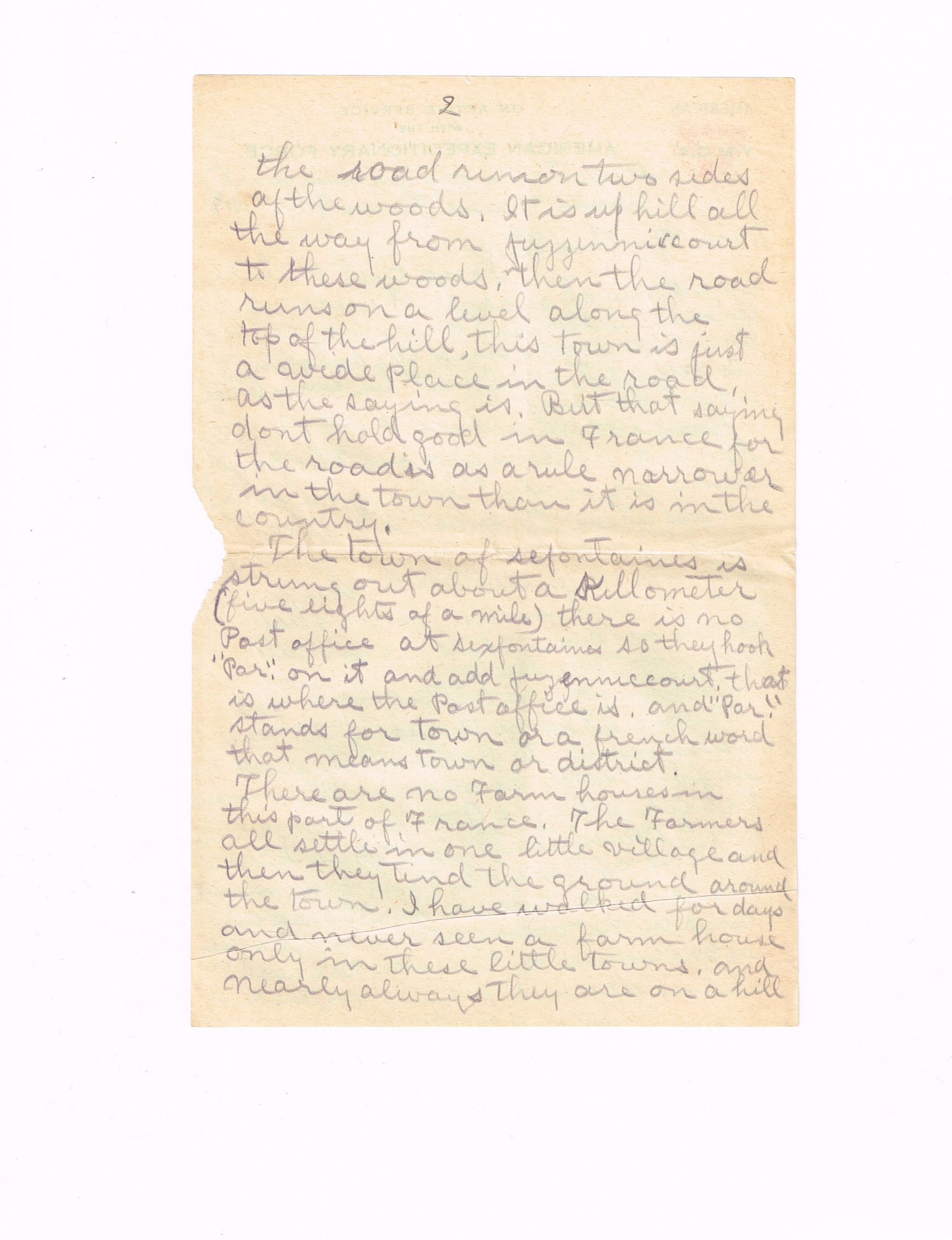 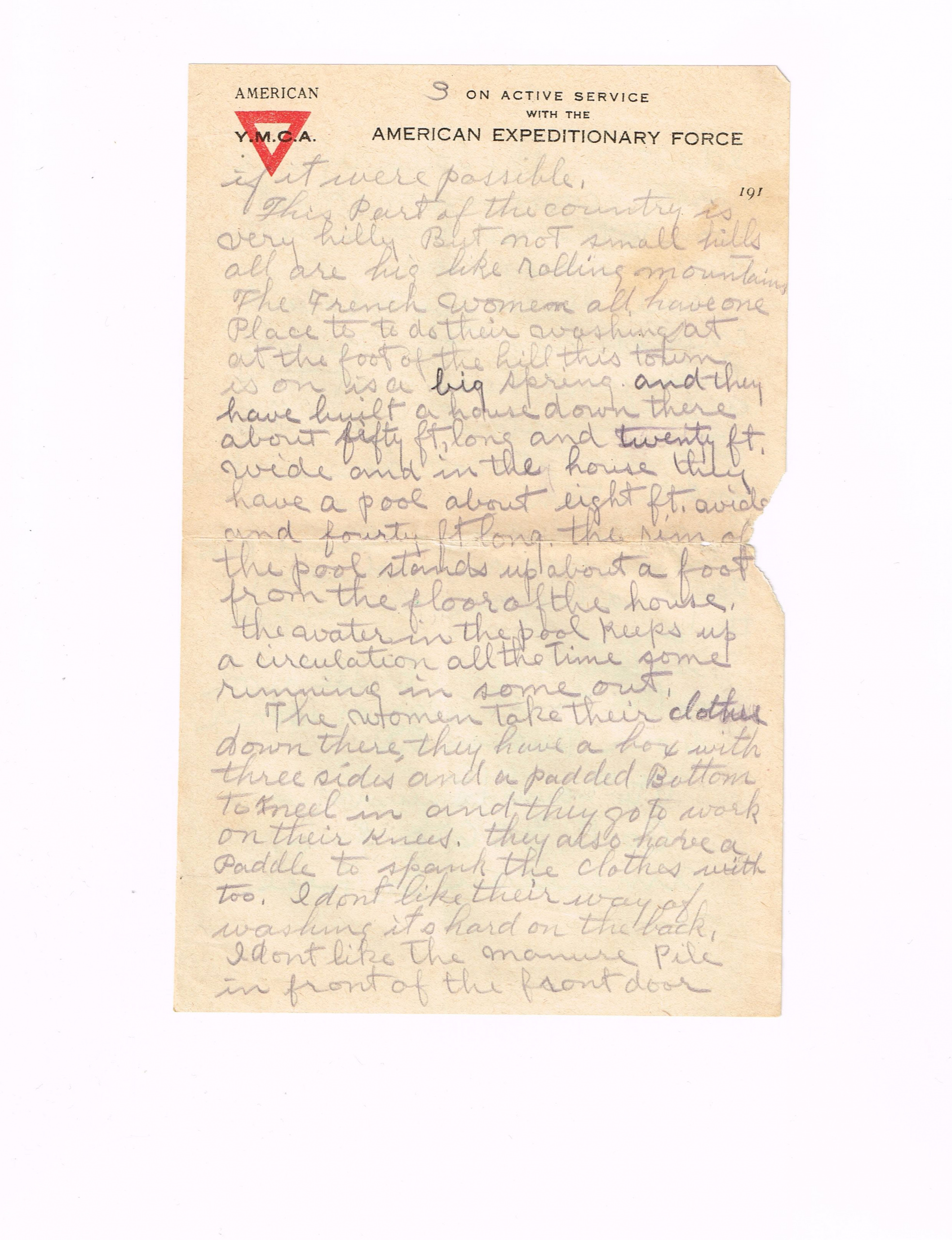 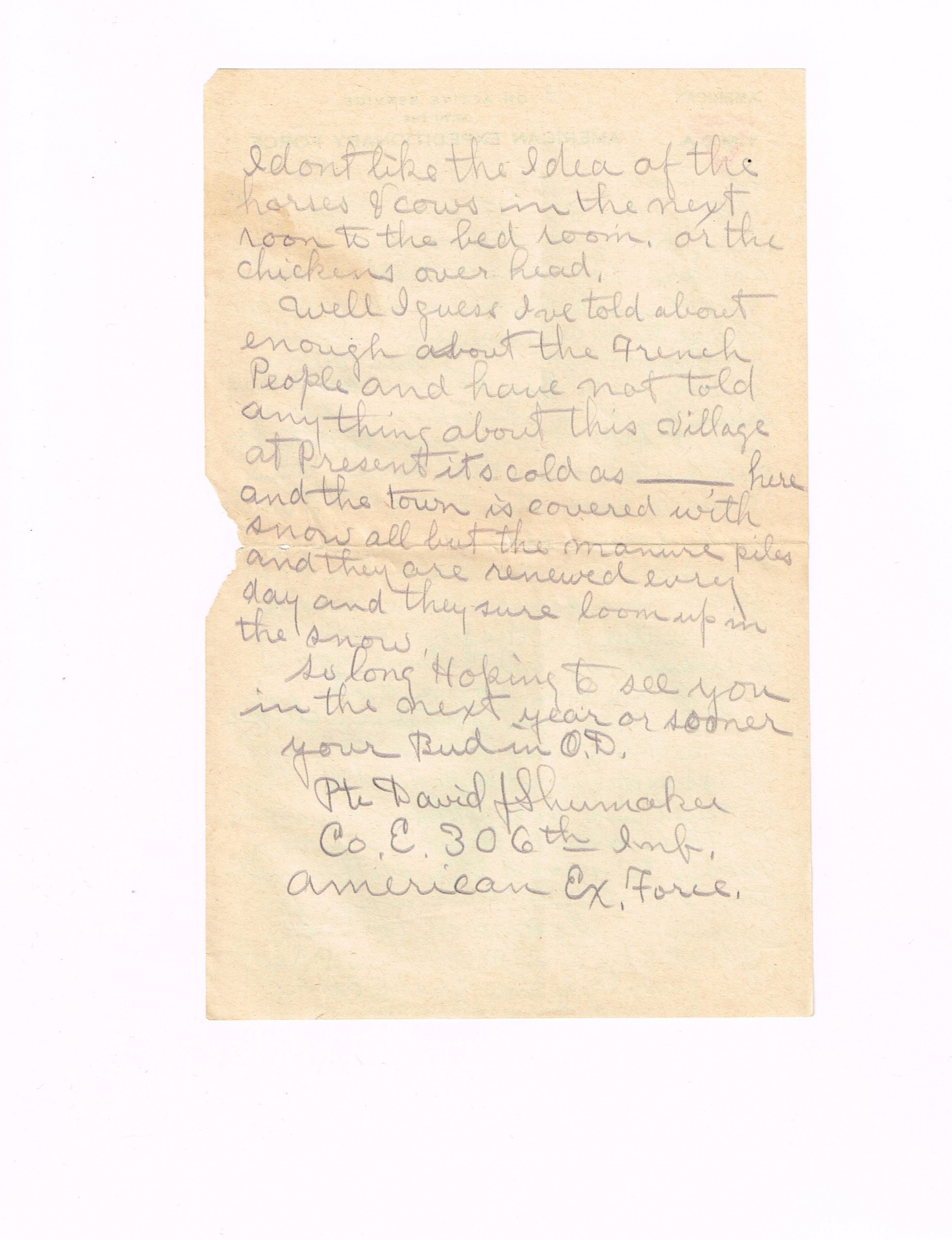 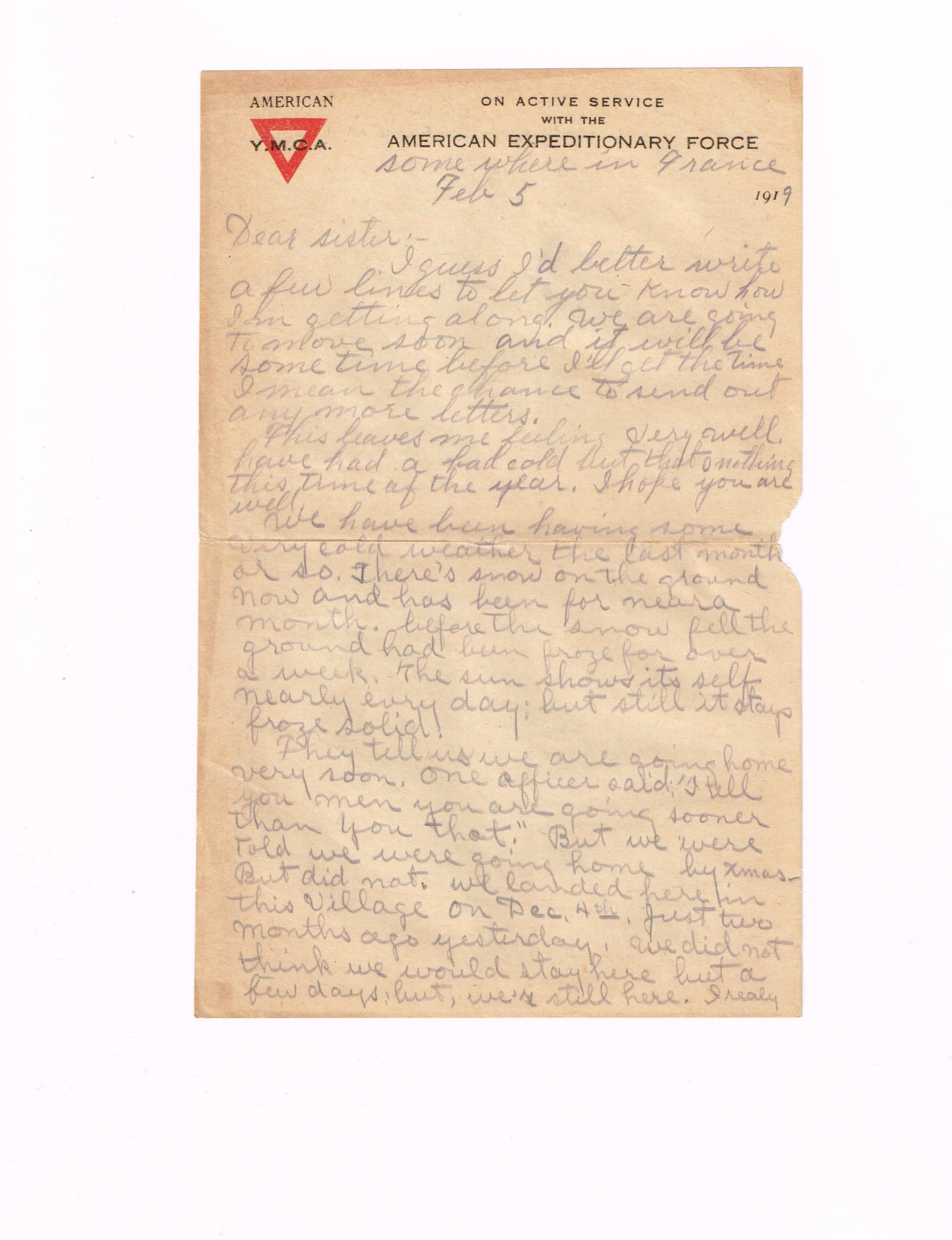 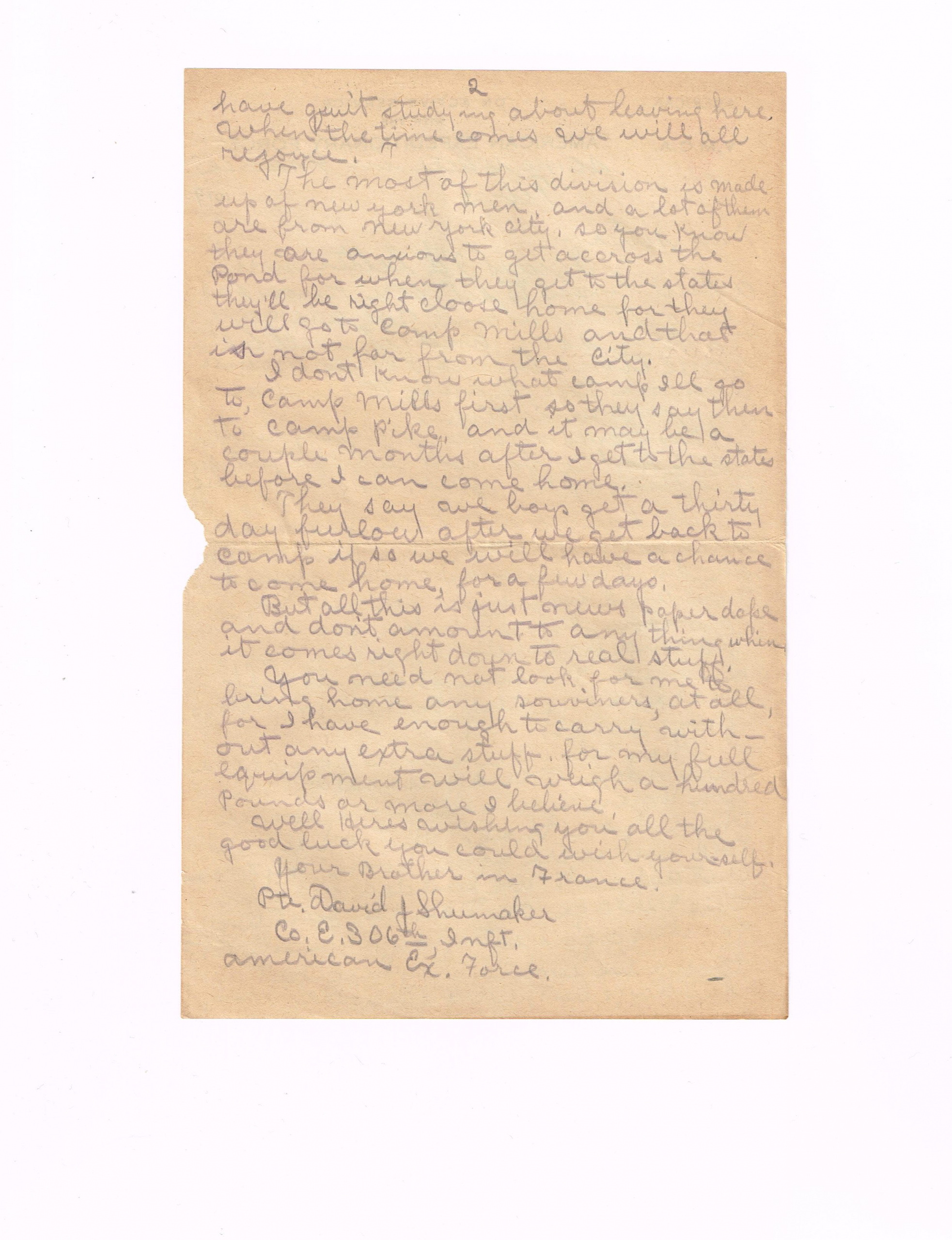 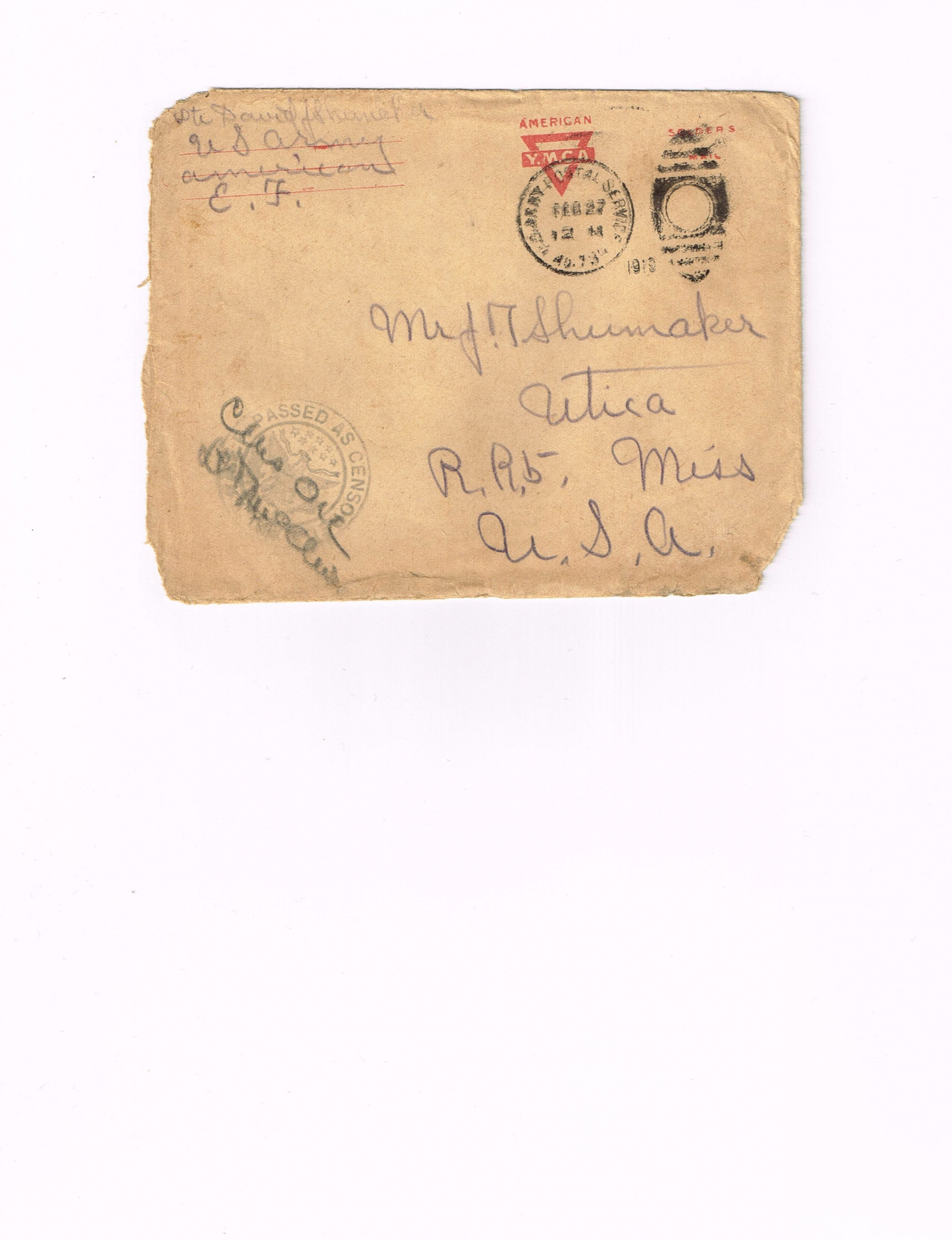 Did you enjoy this post with David Jesse Shumaker’s WWI letter of February 5 1919 to his family back home? Let me know in the comments below!