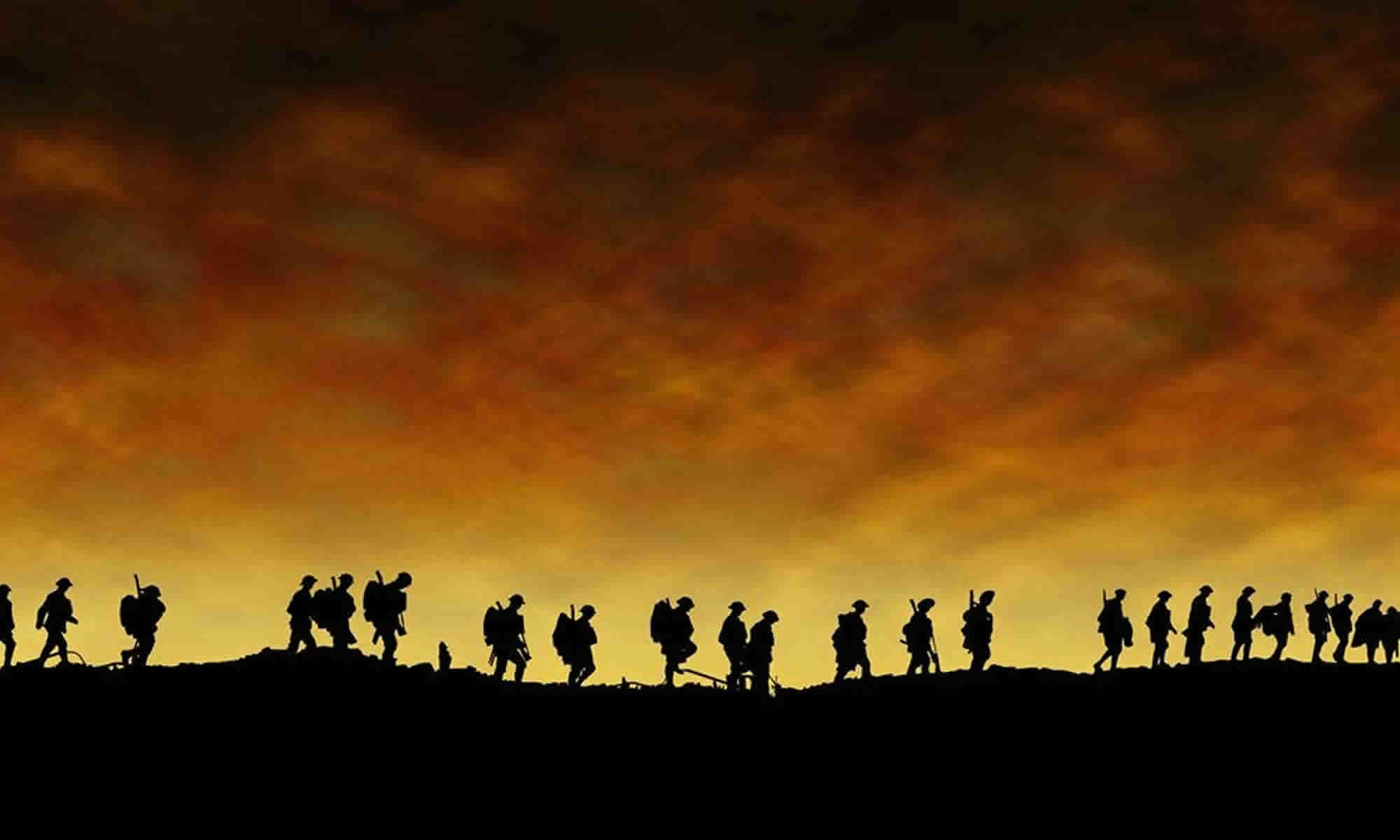 “ON THANKSGIVINGS DAY WE HIKED OVER FOURTY KILOMETERS. ALL THIS HIKING WE CARRIED FULL PACKS. BELIEVE ME WE SURE WERE GLAD WHEN WE LANDED IN SIXFONTAINES PAR JUZENNECOURT.” READ DAVID’S WWI LETTER OF JANUARY 27, 1919.

What a long letter! David describes the long hike that he and about 800 other men made across France, which is why he hadn’t written any letters to his family back home during November and early December of 1918. 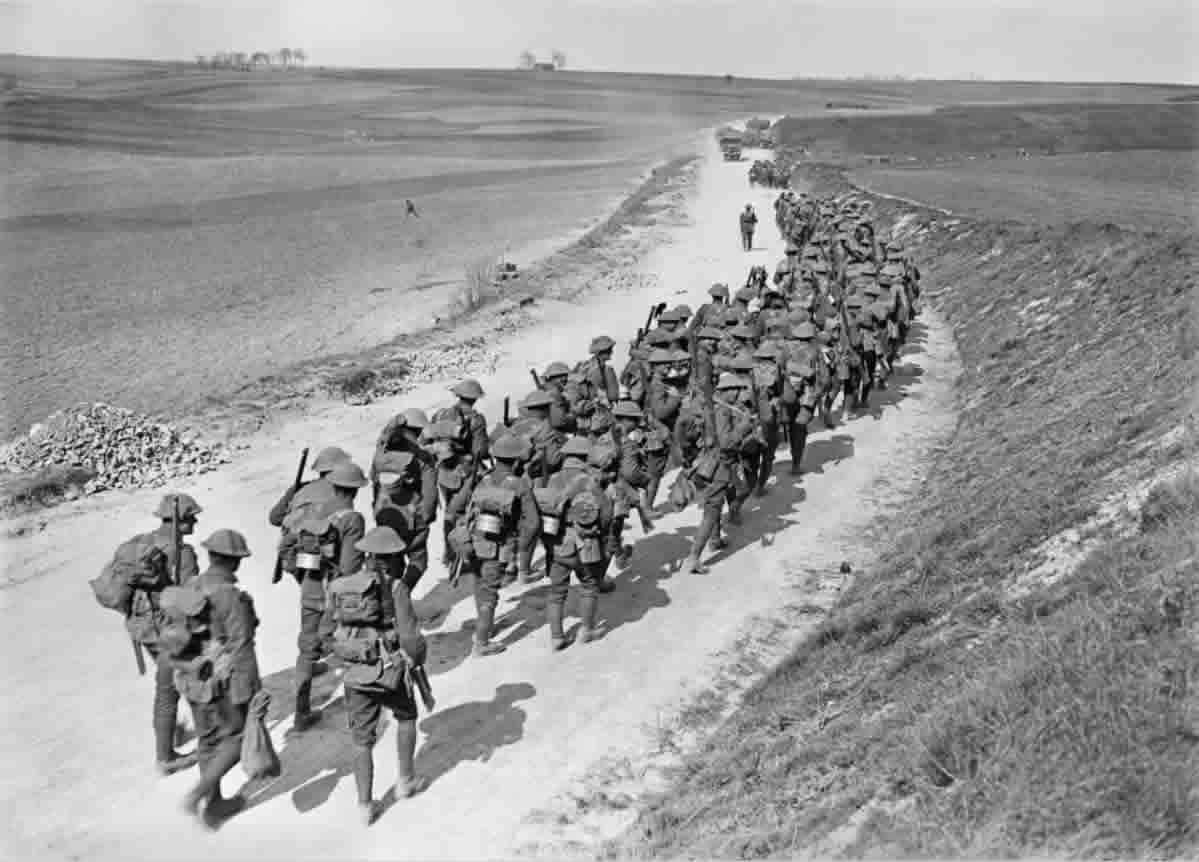 They hiked for weeks, fueled by hard tack and rations, and hopped a train when they were able. David describes hiking through places that had once been pretty towns, but there was nothing and nobody left in those places after the Germans had been through.

In researching this, I found that hiking was pretty much the only way that the soldiers had to get from one place to another during World War I, especially when there were so many soldiers that the supply of trucks couldn’t carry them all.

For the 100th anniversary of the end of the war, a group created a walk across France, following the lines of the Western Front. If you would like to read more about it, and possibly go hike this scenic trail, here is the link: 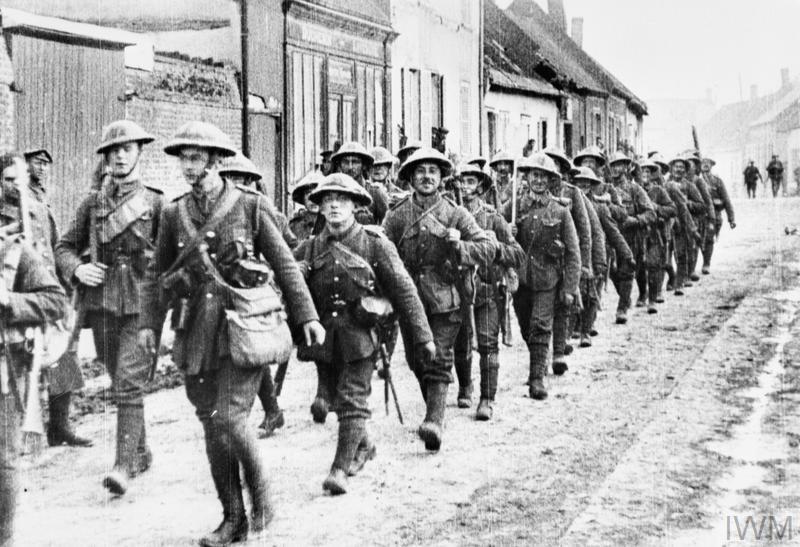 Just rec’d a letter form you dated Dec 31 & mailed Jan 4th. This leaves me feeling fine, hope you the same.

Mother I know all about the letters that you did not get after Nov 11. Here is the whole mistry in open. On or about Nov 13th. We (I say we for there were fourty boys from Co. L, 162nd Inf in the going) started out early in the morning with “Full Packs”. And I mean they were full to. At the Public square in Contres we took a rest for a few minutes, loaded our packs in a “Lorry” (auto truck) and pulled out our selves on foot for St. Agnian, twelve Killometers away. In due time we arrived at St. Agnian, and recovered our packs drew some train rashions, to keep us in food for three days. (we already had a three day reserve rashion (I guess that’s the way its spelled) with us) about three O’clock in the after noon we pulled out of town. In the mene-time our little gang had grown, by little bunches of boys from other Companies in the 41st div. joining us. Until we had about 800 boys in all, we loaded on the train just like so many Hobos, right in the freight cars we went fourty men to the car. The French freight cars are quite a bit smaller than the American. We also have lots of American Freight cars over here that look natural only the couplers are quite different. No automatic couplers used on the French system at all.

Then along the road we picked up more boys in Freight cars until we had quite a long string of cars.

We were on that train for about four days & four & 1 half nights. Any how we got off at a sort of a wilderness looking place about one O’clock at night, went down a hill out in a sort of a hollow in a pasture sourrounded with trees and a spring Branch running soggily thru it. Any how it was quite cool that night and the ground was Froze even the spring branch was frozen so we pitched our pup tents a bout in a systematic order about over the pasture four hundred of them. Each man carries a half a pup tent complete. We slept there the rest of the night. Yes we were on ground that had been occupied by Bosch. Early in the morning we pulled out to the railroad switch where we got off at. From the looks of the place it had been a very nice town. But there were nothing left but a new railroad station and some storehouses there then. We waited at that R.R. Head until after noon, about two O’clock. We loaded on a trainload of gravel rode until about four O’clock then was backed on a side track called no. 3 siding. There were no town or anything there only a fine big spring about the size of a young river running out the ground. An aeroplane that had been crippled and the aviator killed was sitting at rest out about a kilometer from where we were.

We were supposed to leave there that evening but the other engine did not come and the one went back so we were s.o.o.l. and just made dog tents again. That was a nice place to camp. There were lots of Barbed wire entanglements bout there and we got the wooden posts and had nice fires and some jim-dandy smudges. I know the fellow that had his tent & fire right back of my tent sure had a smudge nearly smoked me out all night long. Well I guess I am off the story.

Well we pulled out there the next afternoon and had to push the gravel train up the grade then ride down. The engine pulling us was a French engine and we Knic named it “piss ant”. We would tell the engineer to get that “Piss Ant” off the track and we’d get the train there all right. Any how we finally give it up and took off across the country on foot then camped “some where in France” that night. Not one of us boys knows where we were that night some where on the old Battle field. The next day we were on the road bright and early. About noon we passed thru a town by the name of (it sounds like Verelle). Any how there were a few hundred Baby tanks in that town.

We went thru town (if it could be called a town it had been a nice one but there were no town there then or now.) We eat our “Hard Tack” & “Corn Willie” (Corn beef) and a detail of eight men from our bunch went after water and some more went to get some more corn Bill and “Hardtack”. When they got back we pulled out again and hiked untill dark pitched tents again, and the next morning an orderly found us and give our officer an order to not go any farther that the seventy seventh division was on the move, and more than likely would come that way. Also told us that the division was on the road home. Gee but we were glad that we were not going any farther. We did pack up and go back to the town and thru it to a nice hill side and camped there and we stayed three days & three nights Oh! Gee! But it was no nice place to stay for pleasure. There were German boots with men’s feet in them yet. And lots of other unpleasant things for one to see. After our third night there we hiked back partialy along the same road we were over. Then we went over all kinds of hills & roads to Les Islettes (Pronounced Las e Las). We got there about three thirty P.M. stayed there for about five or six days then the seventy seventh div arrived and the 306th Regiment was located about three kilometers out of town. A long in the afternoon we were called out and went to our assigned companies, eight of us to each company. There were fourty of the boys from Co. L. 162. The rest of the boys went to other regiments etc. I know nothing of what were done with them. Then from there we started out on Sunday after being there one full day. We went to Co. E. 306th Inf on Friday. Saturday we had a good rest. On Sunday we started out on our nine day hike. That hike took in Thanksgivings Day. On Thanksgivings day we hiked over fourty kilometers. All this hiking we carried full packs. Believe me we sure were glad when we landed in Sixfontaines par Juzennecourt. Sexfontaines is a nice little village and Juzennnecourt is a small farm village about four kilometers from Sexfontaines. Juzennecourt has no Post Office. So you see just what kind of a small town this is. We have been here now since Dec 4th / 18 and all during that time I did not have a chance to write but two letters and a couple post cards. I wrote one letter to you one to Catherine at Les Islettes. The two cards were one to Uncle Ed & one to the mail orderly at Co. L. 162 Inf. A.P.O. 727. I only had a couple or three sheets of paper and one transfer card for the mail & one K.C. card which I sent to Uncle Ed. Then there were no mail sent out until we got here. That is the mail orderly would not take mail for there were no way of getting it out as the divisional post office was moving and was away a head of us. I suppose that was the reason so you see why I could not write to you. You see why you did not get any letters from me for so long a spell. Then it takes quite a while for mail to go from here to yonder.

You spoke of me coming home so soon.

Why Mother if I get home by July I’ll be doing fine. Oh I guess we’ll get back to the states in a few weeks. I don’t know when we will leave this burg but from all appurence it will be in the near future. We look to pull stakes in about a week may be sooner.

I got a couple letters from Catherine today. She says she is having a nice easy time. But I also got a letter from Aunt Anna Parmenter. She let the hog out of the pen so mum is the word say nothing know nothing. Forget it all. That’s what our officers told us when we left Camp Pike. And we sure did forget all of a lot too believe me.

Well I must close this little “essay”. I’ve got to write to Kitty also & writing paper is pretty scarce. Part the time we can’t get it for love or money.

By By your Loving Son 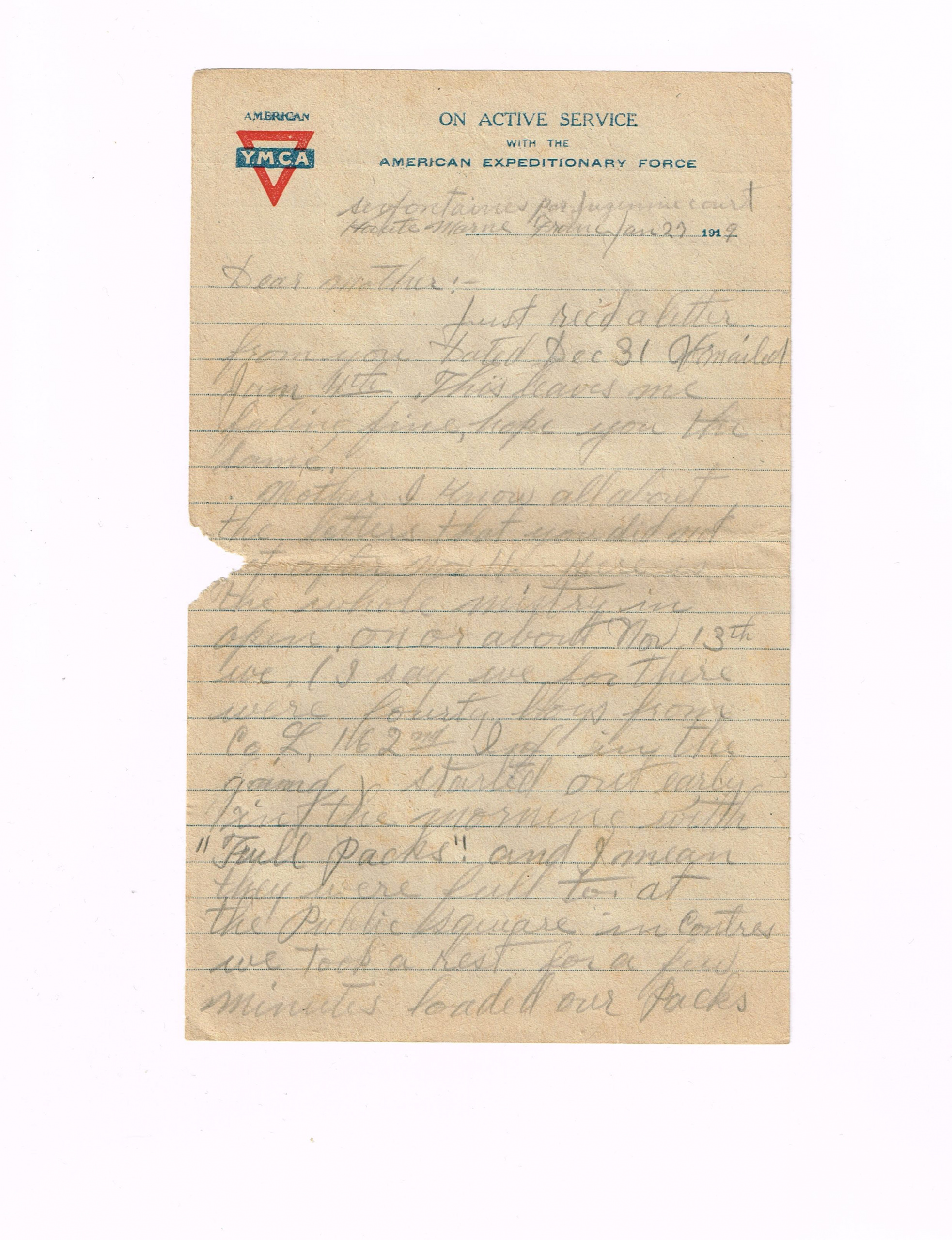 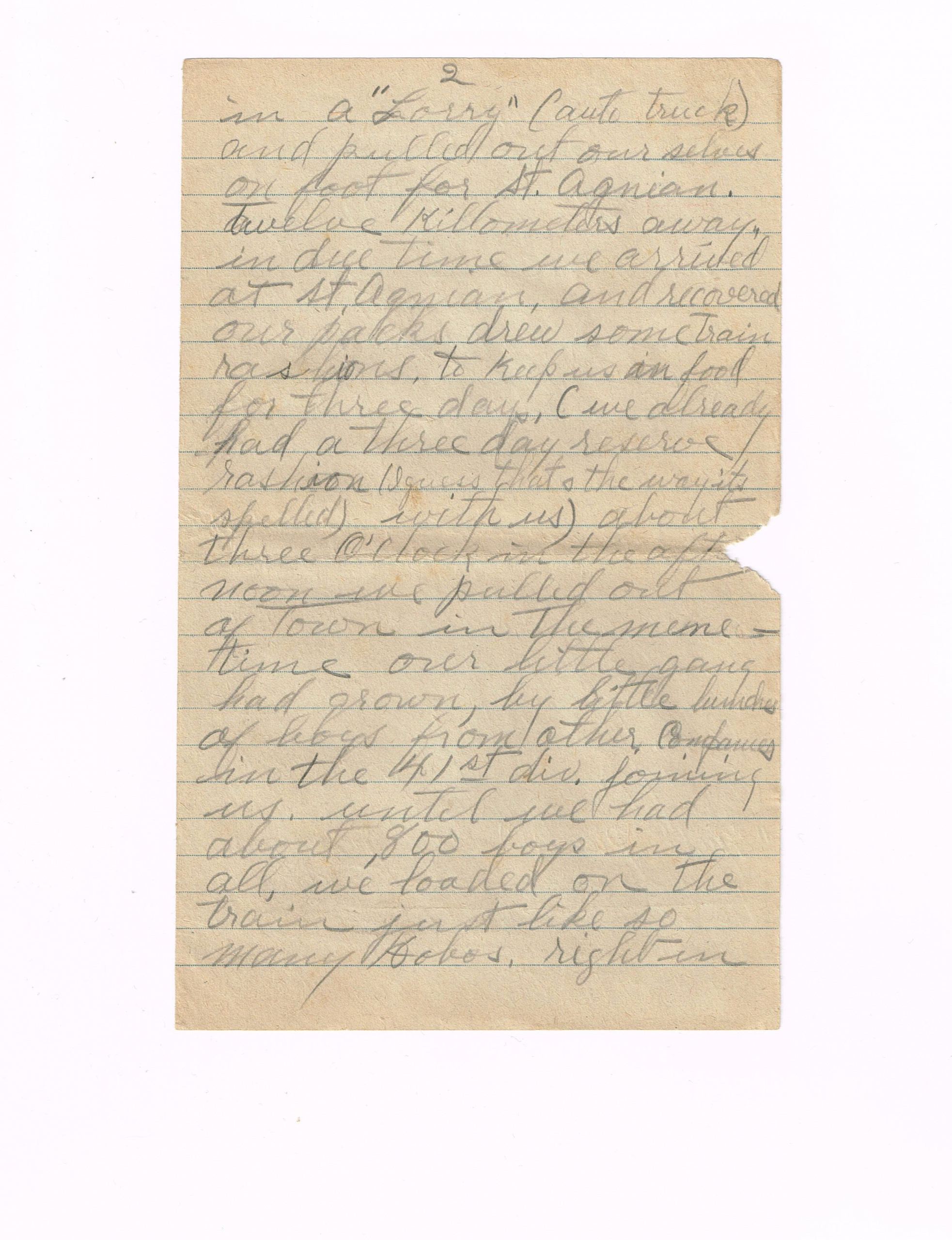 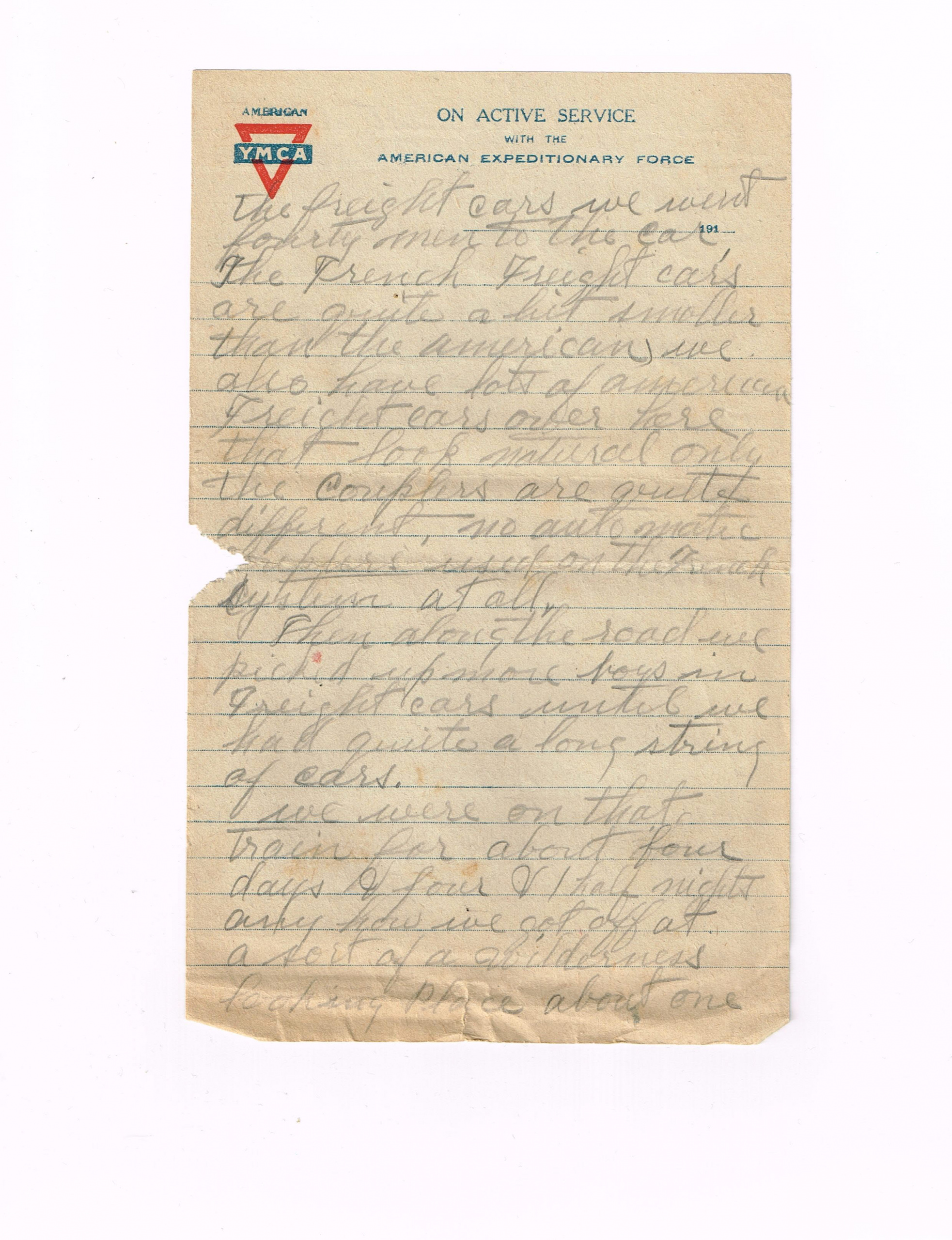 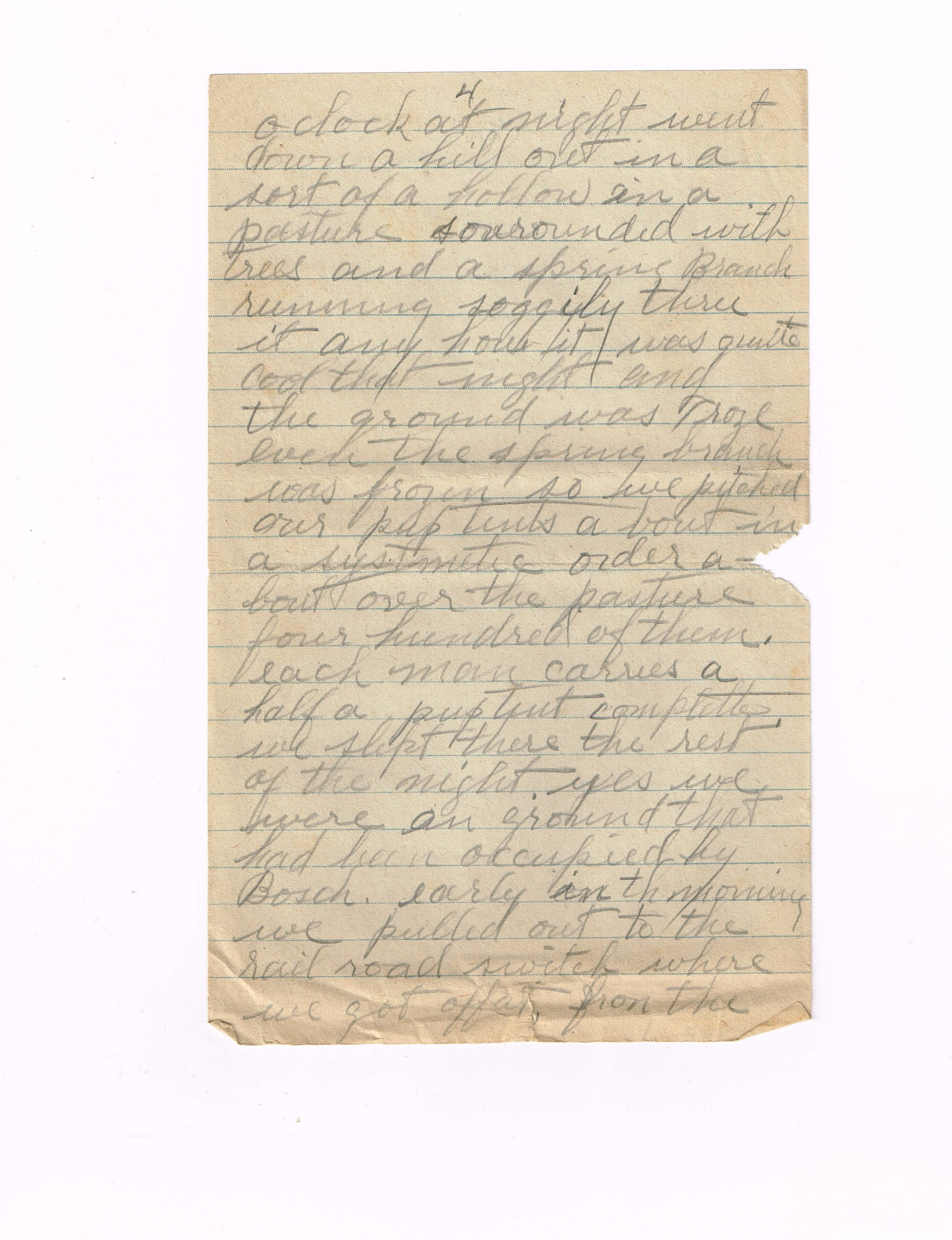 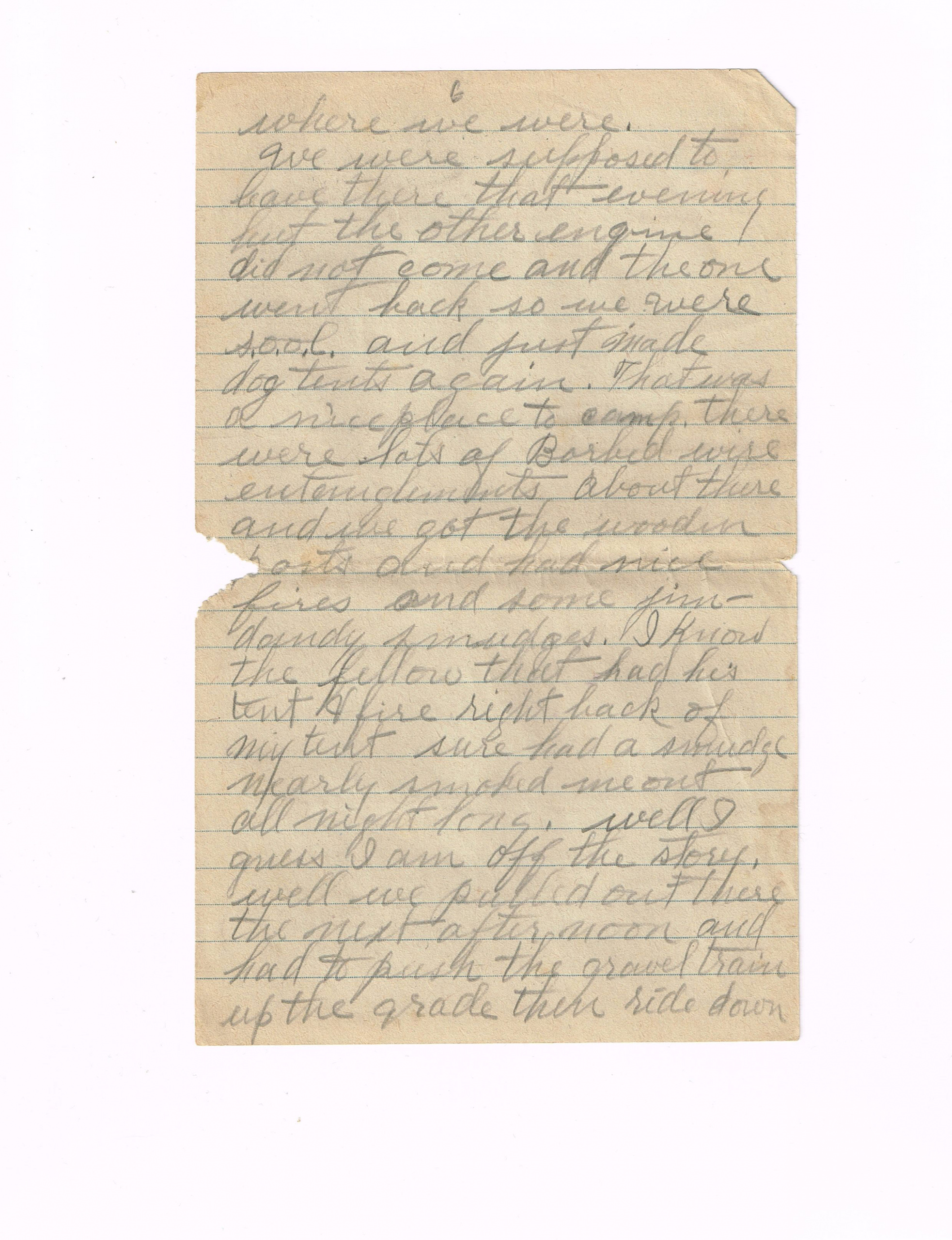 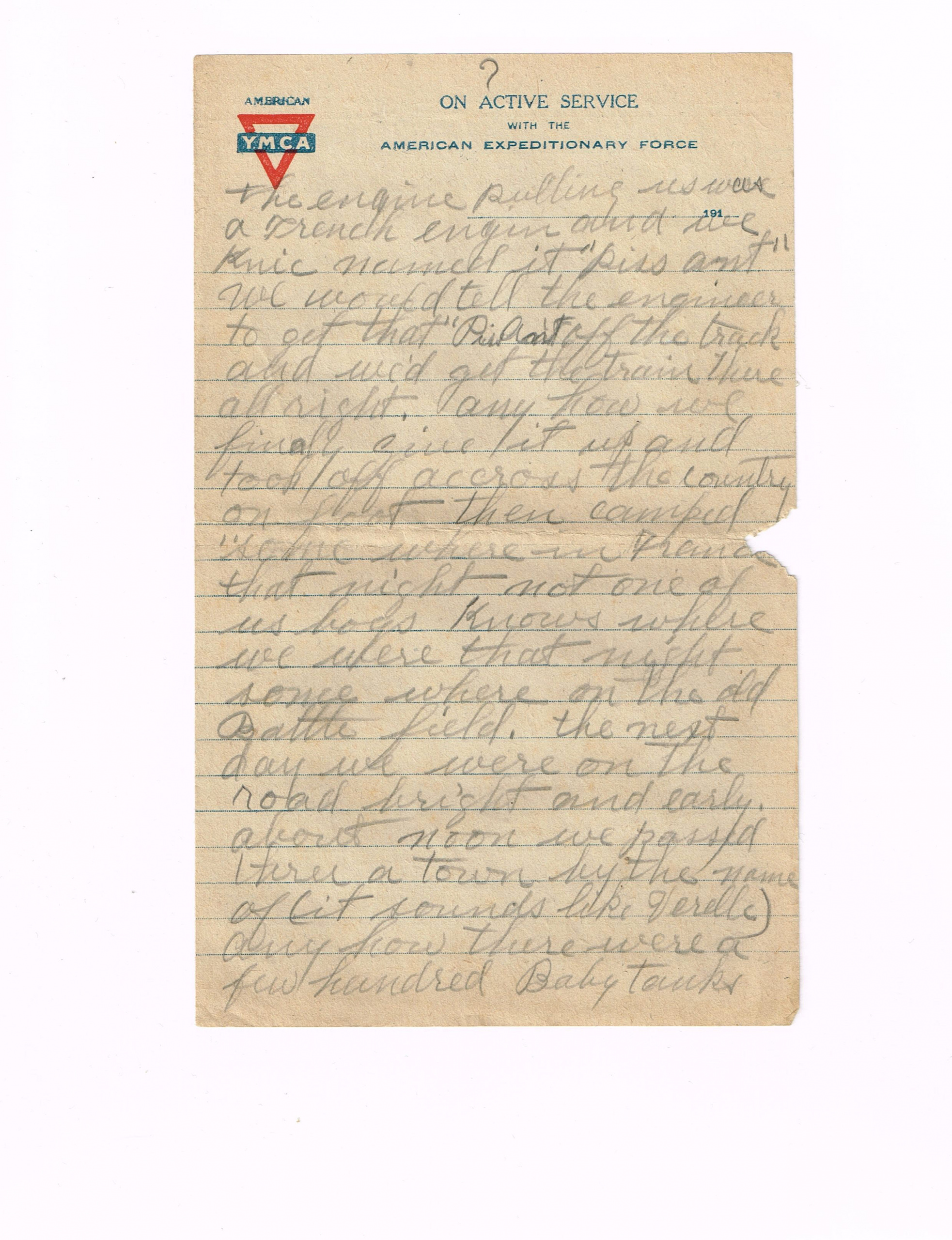 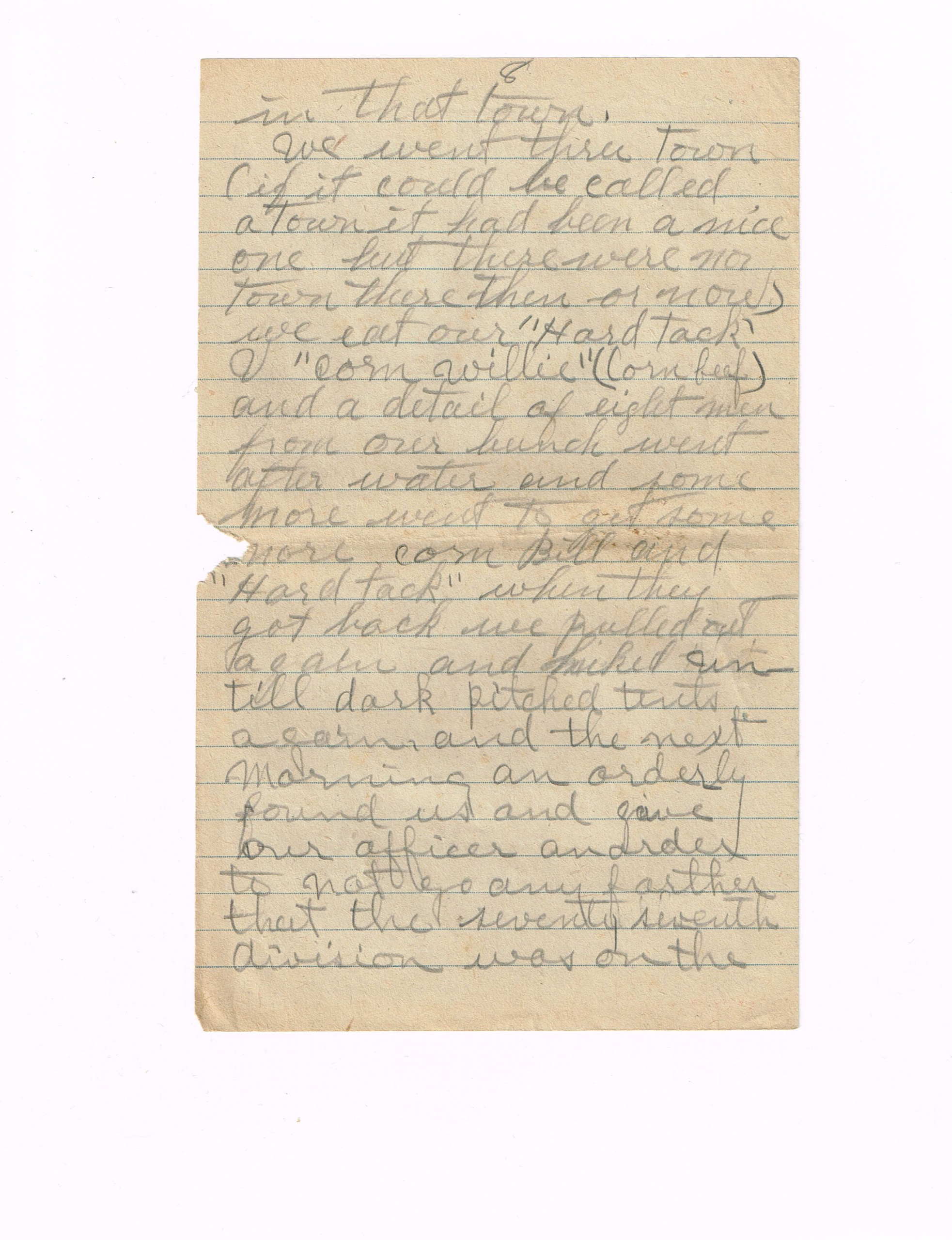 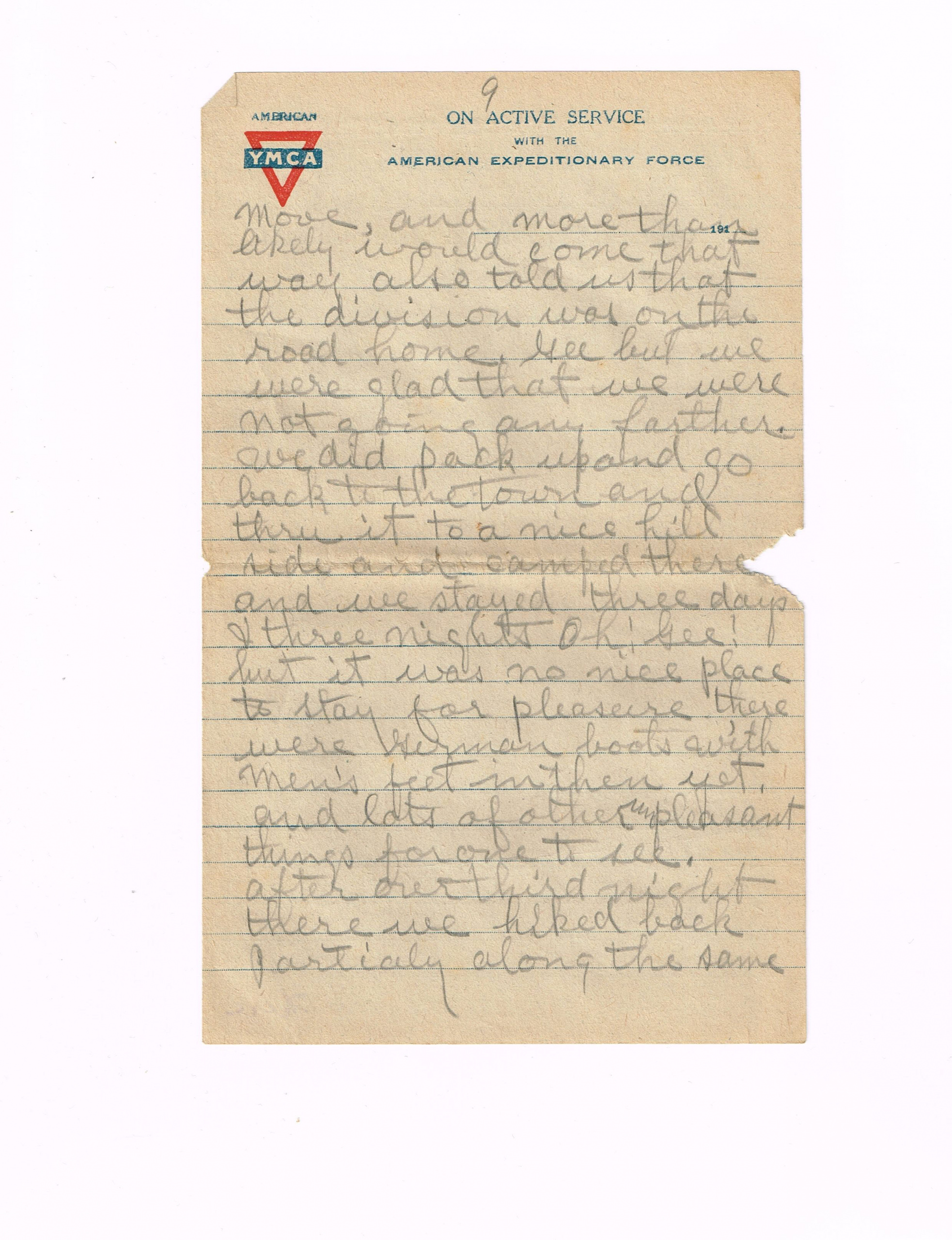 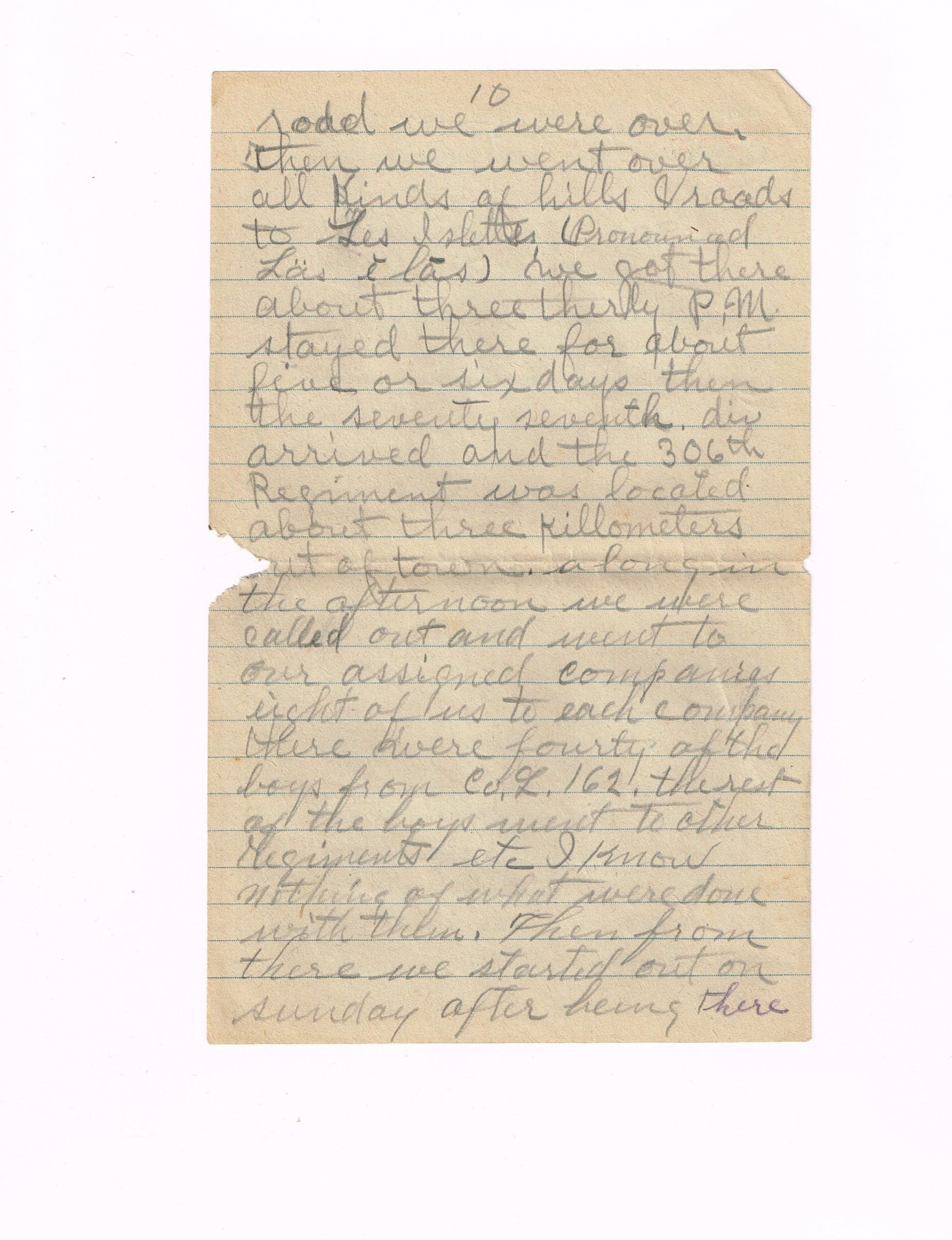 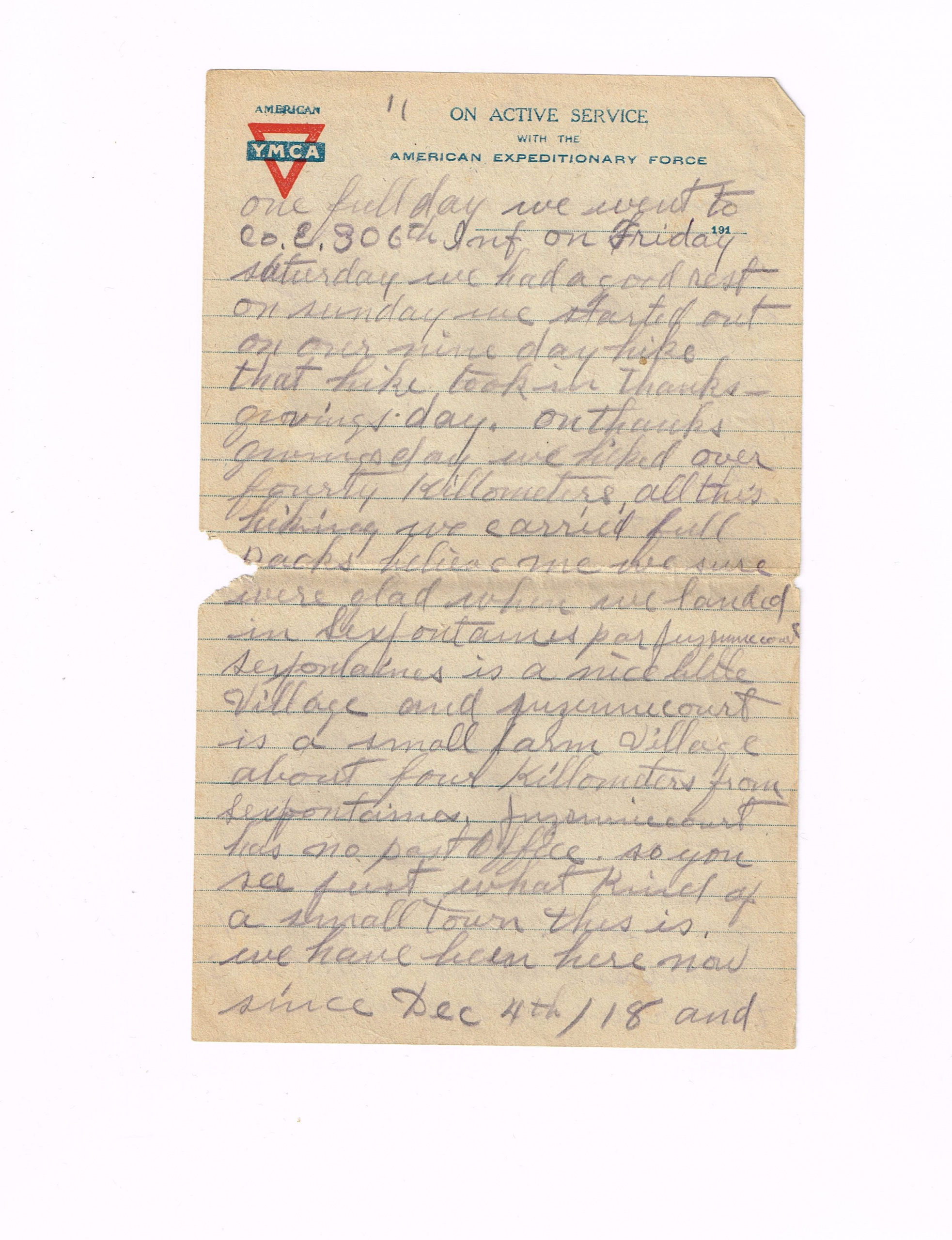 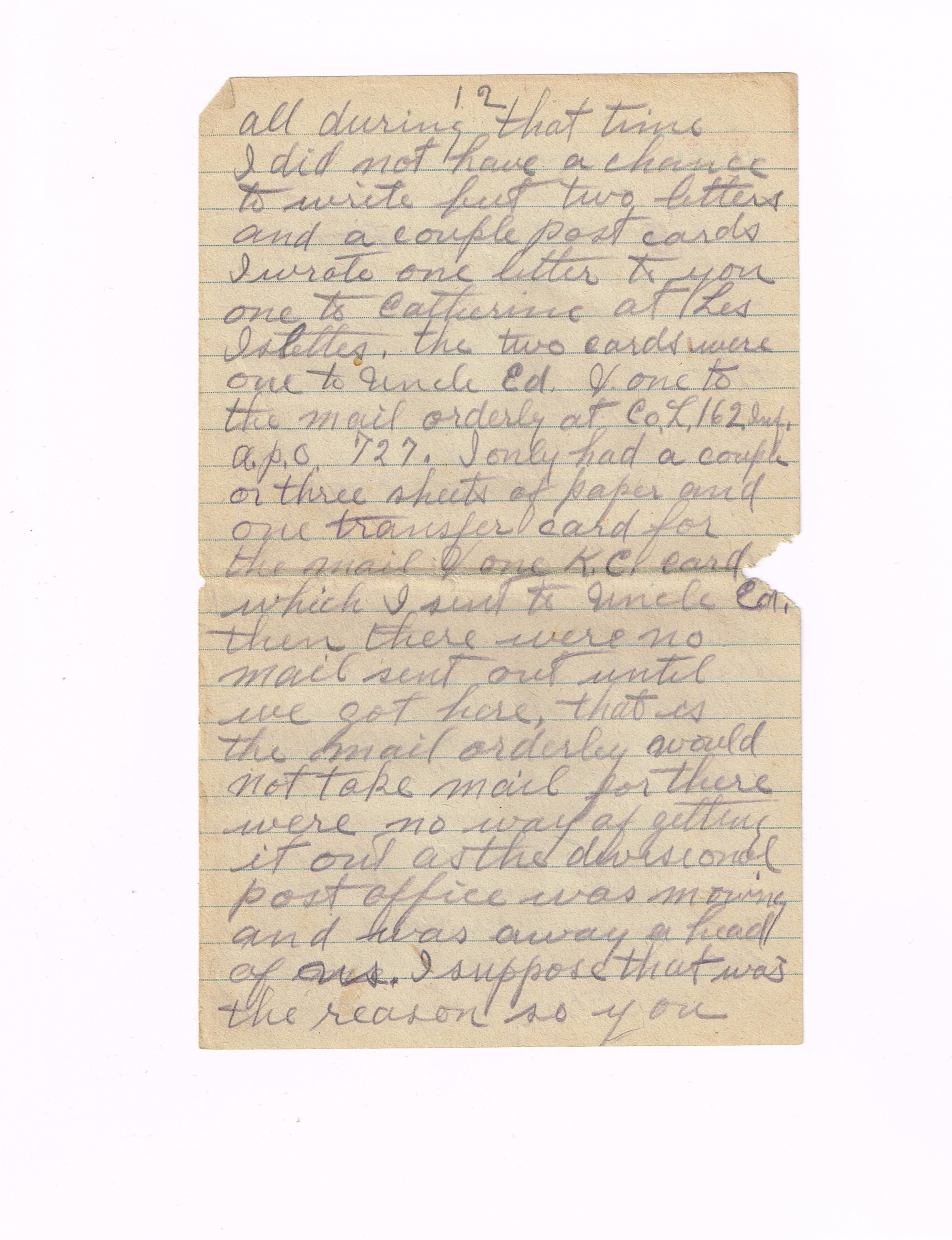 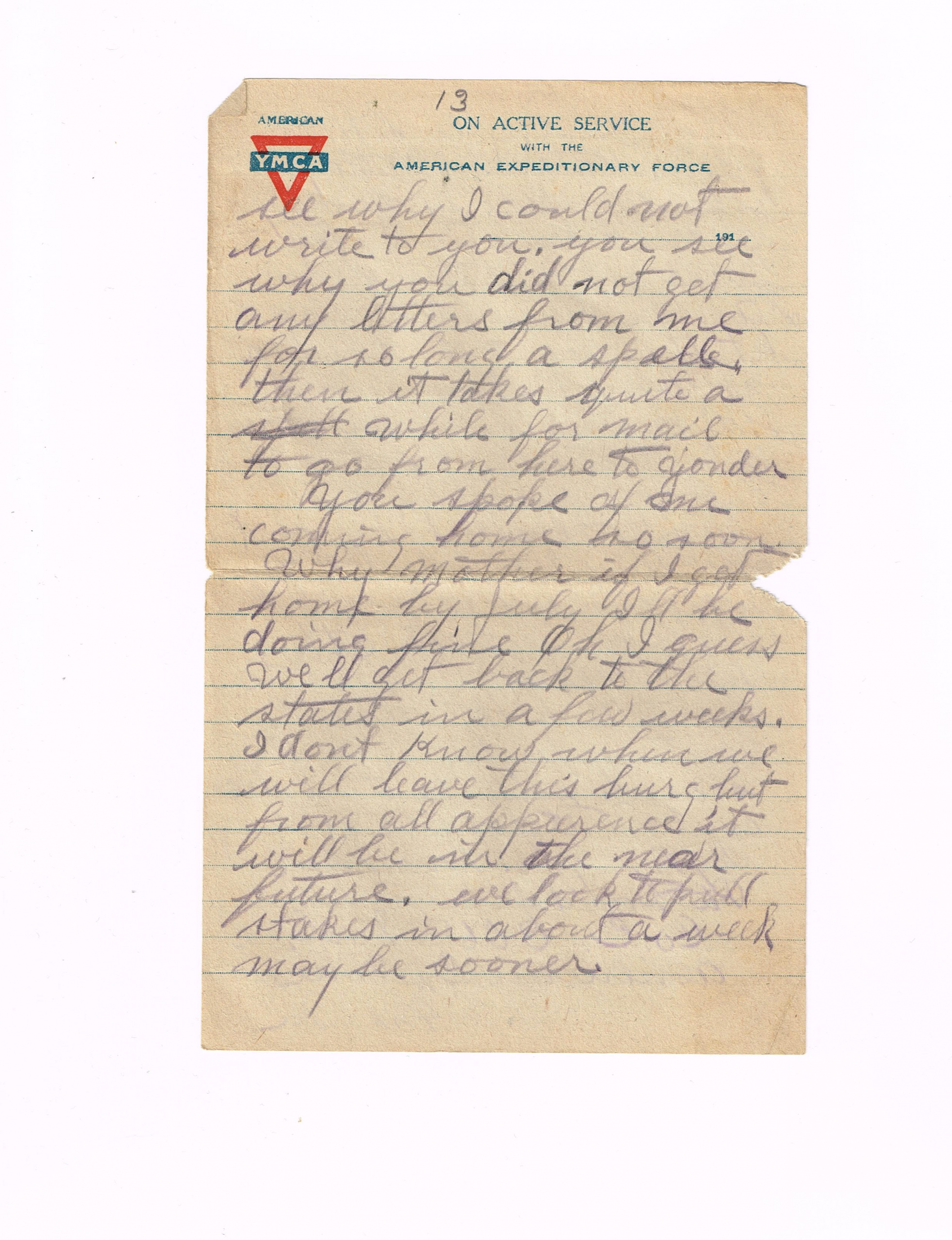 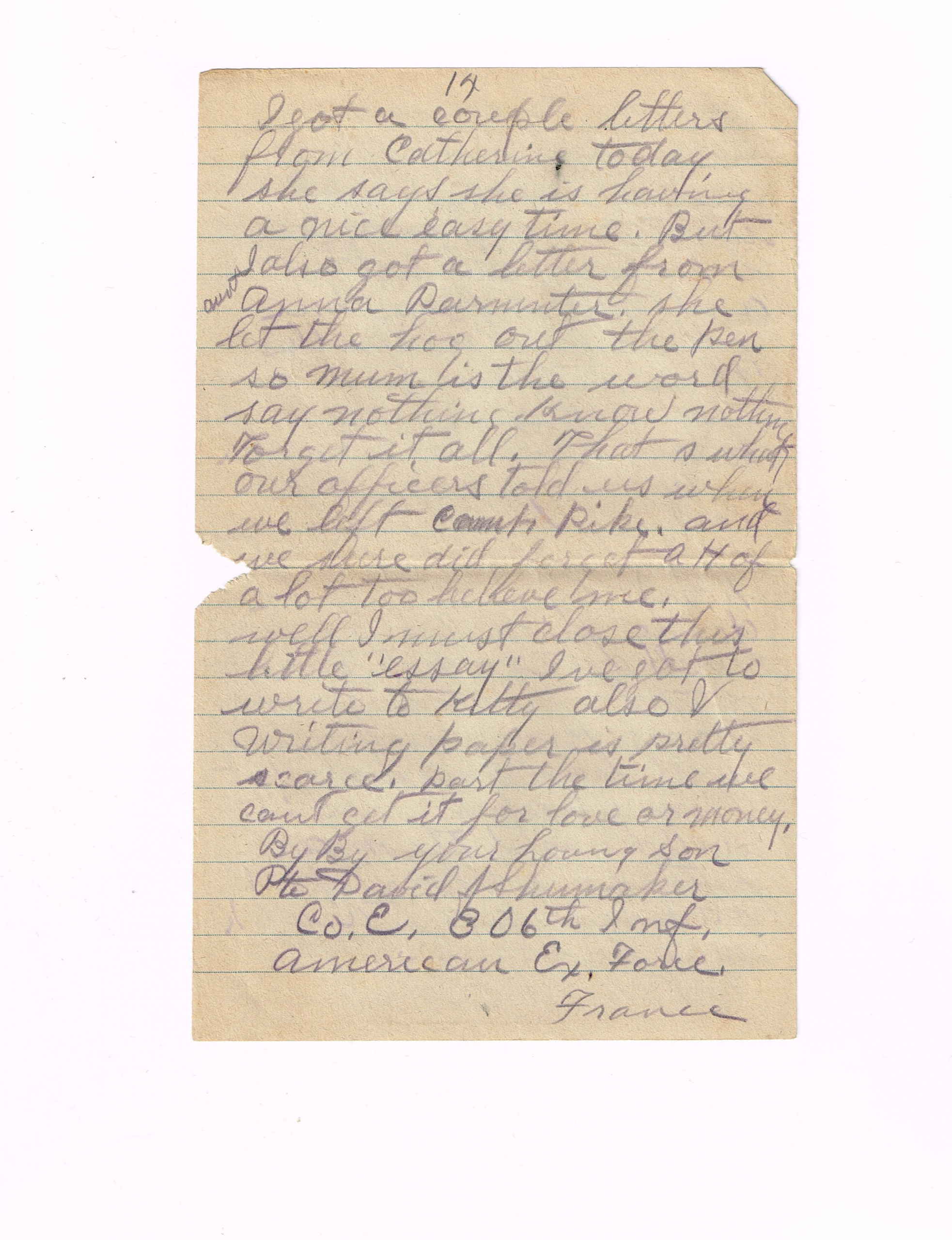 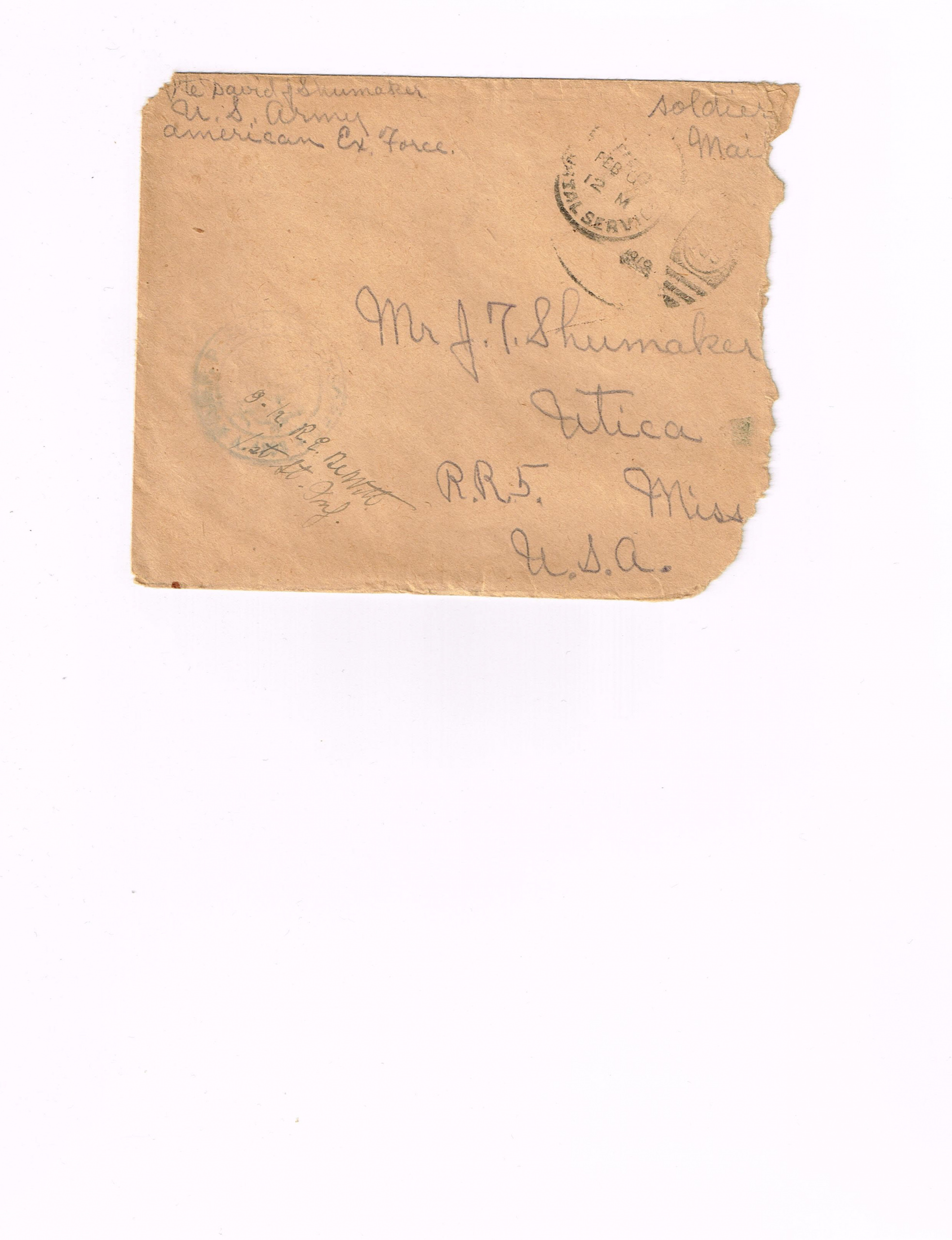 Did you enjoy this post with David Jesse Shumaker’s WWI letter of January 27 1919 to his family back home? Let me know in the comments below!