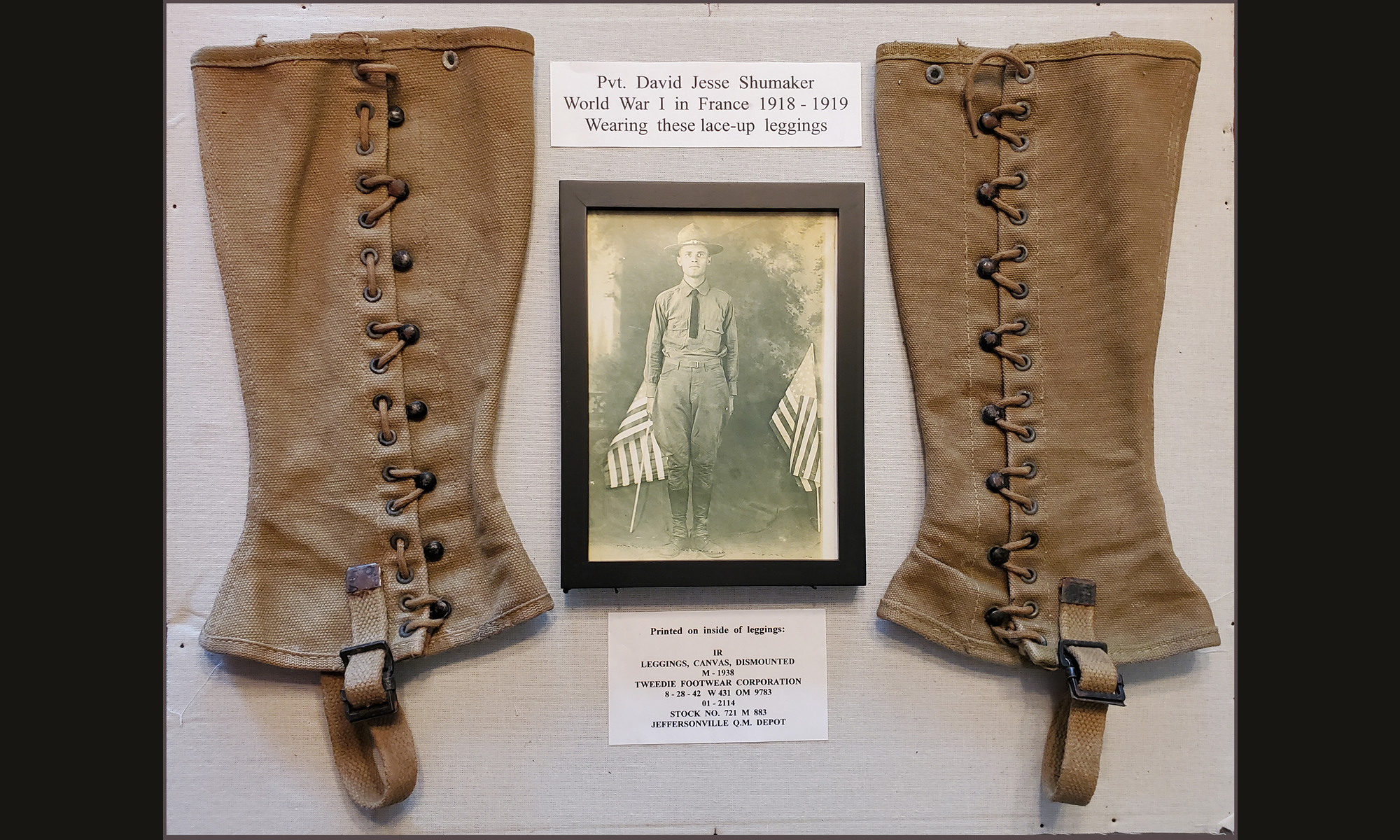 MY MOTHER HAD HER DAD’S WORLD WAR I LEGGINGS, AND PUT THEM INTO A SHADOW BOX FRAME WITH A PHOTO OF HIM IN UNIFORM. DAVID JESSE SHUMAKER TALKS ABOUT THEM IN HIS WWI LETTER JULY 15 1918.

David talks about his poor quality leggings, and that he was having to mend them already! If they were such poor quality that they had to be mended before he even left for France, their quality was definitely very poor. But he obviously got a great pair of leggings later, because they still look good after more than 100 years!

David also asks about a murder back home. I did a cursory search for the names that he mentioned, but was unable to find anything about the murder in question.

In this letter, he quotes the poem “Nobility” by Alice Cary. These are really good words for a young man… or actually, for everyone. I’m not sure whether I’ve ever heard or read this poem before, so I looked it up to see if I could find something about it. My favorite quote from it is probably “True worth is in being, not seeming.” Here is the interesting analysis of “Nobility” that I found, in case you want to read it for yourself:  https://sergiocaredda.eu/inspiration/nobility-a-poem-by-alice-cary/

I rec’d your dear letter this A.M. dated 7/12/18 sure was glad to get it. No we will not leave on the 16th, because Co. B is under strict quarantine and we leave with them. There were over half the boys in Class B, and they will be left here anyway I suppose. Anyhow that is the understanding.

Some of the boys were supposed to leave last Wednesday but I was not in that lot. They did not go owing to the quarantine on Co. B boys. Now I don’t know when we will leave but I don’t think it will be very long because I ask the supply sargent yesterday for a new pair of leggings, and he told me to try and make the ones I have do me as they were short on leggins and I would get a new pair any way when I got to where we were going. He said “and that will be the D – soon too.”

So I am going to do a nice job of tailor work on my leggins. They are bursted in the back about a third the way up. And nearly worn out else where. And were no good to begin with.

About those clothes of mine. That express agent is on the blink or else that Sargent that I ask to send my clothes off for me got hold of the rong p-kg. For a couple days afterward I seen my clothes and got them out his room, or rather out the hall when we moved down here. And I bought a little suitcase and sent the suitcase, clothes and allso some other stuff that I got for Catherine, to her by P.P. and she rec’d the P-kg several days ago, for I got a letter from her saying so. I don’t suppose you care for that because the duds are in safe keeping and if you want them just tell me so and I’ll have her to pack up the suit and send it to you. Of course I know you want them but what I mean is if you want it in your keeping instead of hers. I got a letter from her Sat. She was all O.K., then that little girl does not hardley have time to write and when she does there’s that whole regiment of kids to bother her. I have been there and I know.

Was that McGuffie fellow going under an assumed name? Who was it he killed. Or was it Pillers that McGuffie killed. That statement is ambiguous the way you state it sounds like that McGuffie was Pillers. And I don’t know whether am right or not.

I suppose you all are appointed Guardine or Protector or something.

Here’s the way I look at such –

True worth is in being, not seeming. –
In doing each day that goes by,
Some little good – not in dreaming.
Of great things to do by and by.
For whatever men say in blindness
And spite of the fancies of youth,
There is nothing so kingly as kindness,
And nothing so loyal as truth.
We cannot make bargains for blisses,
Nor catch them like fishes in nets,
And sometimes the thing one life misses
Helps more than the thing which it gets.
For good lieth not in pursuing nor gaining of great nor of small.
But just in the doing and doing,
As we would be done by is all. (Alice Cary)

We are having some dry hot weather here now, too. It is hot as – in the daytime and cold at night. I sleep under a wool blanket evry night and it is a heavy one too.

I have already passed the over sea examination and am an A-1 man. And I sure don’t care how soon I leave Camp Pike. And I would really like to go to France. And I like soldiers life fine and I just love the uniform. My uniform feels better on me that any suit of clothes I ever had. Of course our fatigue suits are just plain overall suits about (4) four sizes too large for us that makes them roomy and cool.

That makes 42 articles that Uncle Sam has furnished me with besides what I have any how. Oh yes and 1 tent pole 5 tent pins 1 tent rope 1 shelter half (half tent) that makes just 50, more than a man could cary. And a “blue bag” that’s our suitcase. 1 rifle 1 rifle sling. 1 oiler and thong case that takes in the oiler and thongcase which contains the cleaner brushes string waights and oil can.

Evry man that goes into service in the Regular Army has to have this and more. I’ll get my “more” in a few days ‘cause I belong to the “Regular Army”.

Well I wrote a letter to you all yesterday and told about all the news so will close.

By by
Your son in service
David

P.S.
I am glad you feel like I’ll make it all right, for I think I will too. And I sure am glad that you are not uneasy about me. And to be sure I am going to do my part what ever it may be. The army is not near so bad as some talk it is. Of course if a boy is contrary and don’t try he is bound to be found out, but again if he does his best in the way it should be done and uses his brains for what they were intended he’s sure to be found out, to the delight of his commanders. And they (as a rule) don’t stand back on praising his work.

Have you a service flag? You should have one. Let me know. You seen Catherine’s Service Pin didn’t you?

I’ll wait until night to mail this for I had my picture taken and they are supposed to be here some time this afternoon and I’ll send you all some.

Well I’ll have to clean my piece (rifle) ready for inspection we are liable to have any time.

Tell the boys Hello and I’ll write them when I have time as time is precious now in training camps. Oh yes we were out from under quarantine yesterday at noon. I went to the theater last night there sure was a good play called “Old Boy”, a burlesque on society life. A fine musical comedy with dancing and a beautiful big show. It was the first amusement I went to since in camp except one “Movie” at the Y.M.C.A. They have movies ever other night.

Well by by your son for U.S.A. David 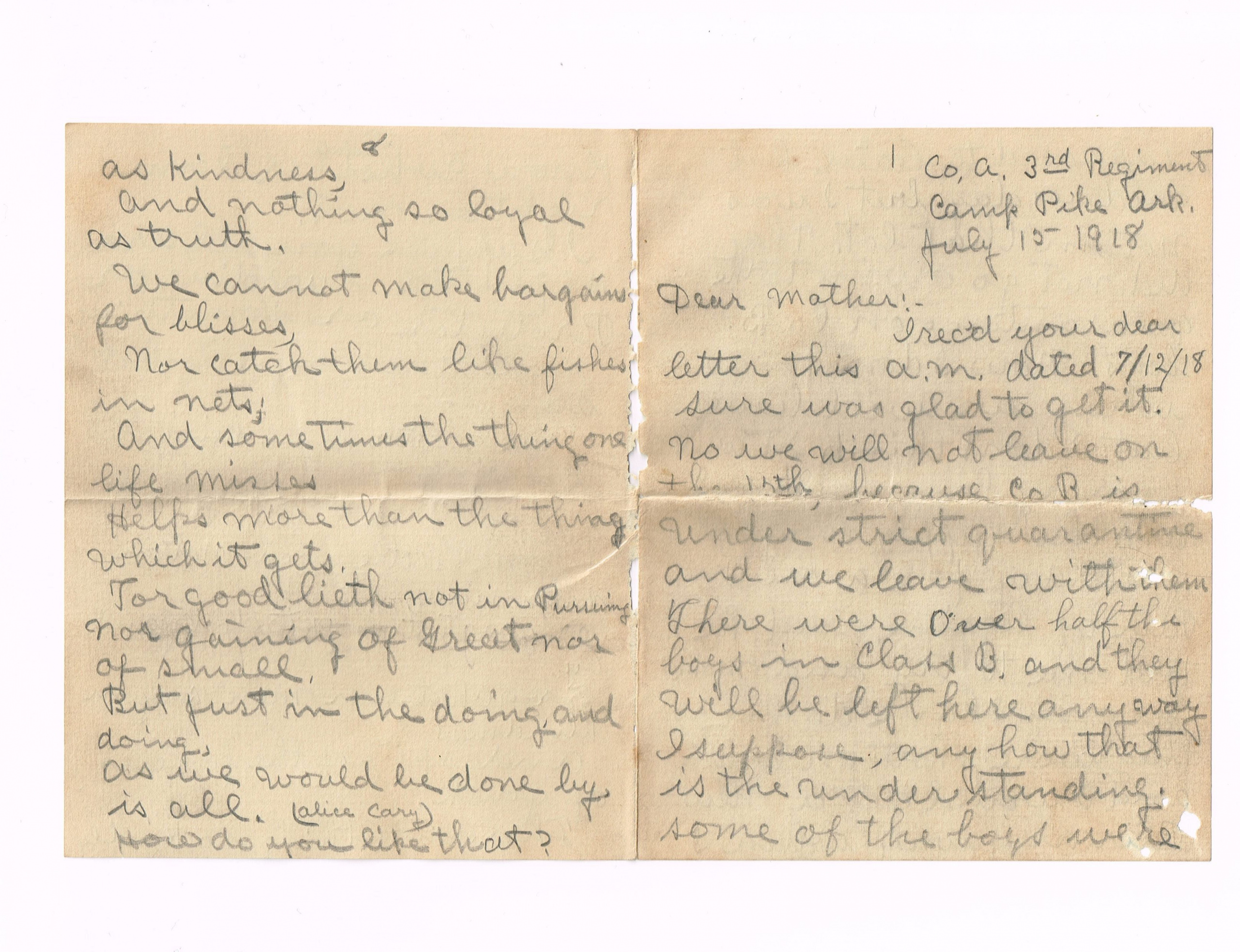 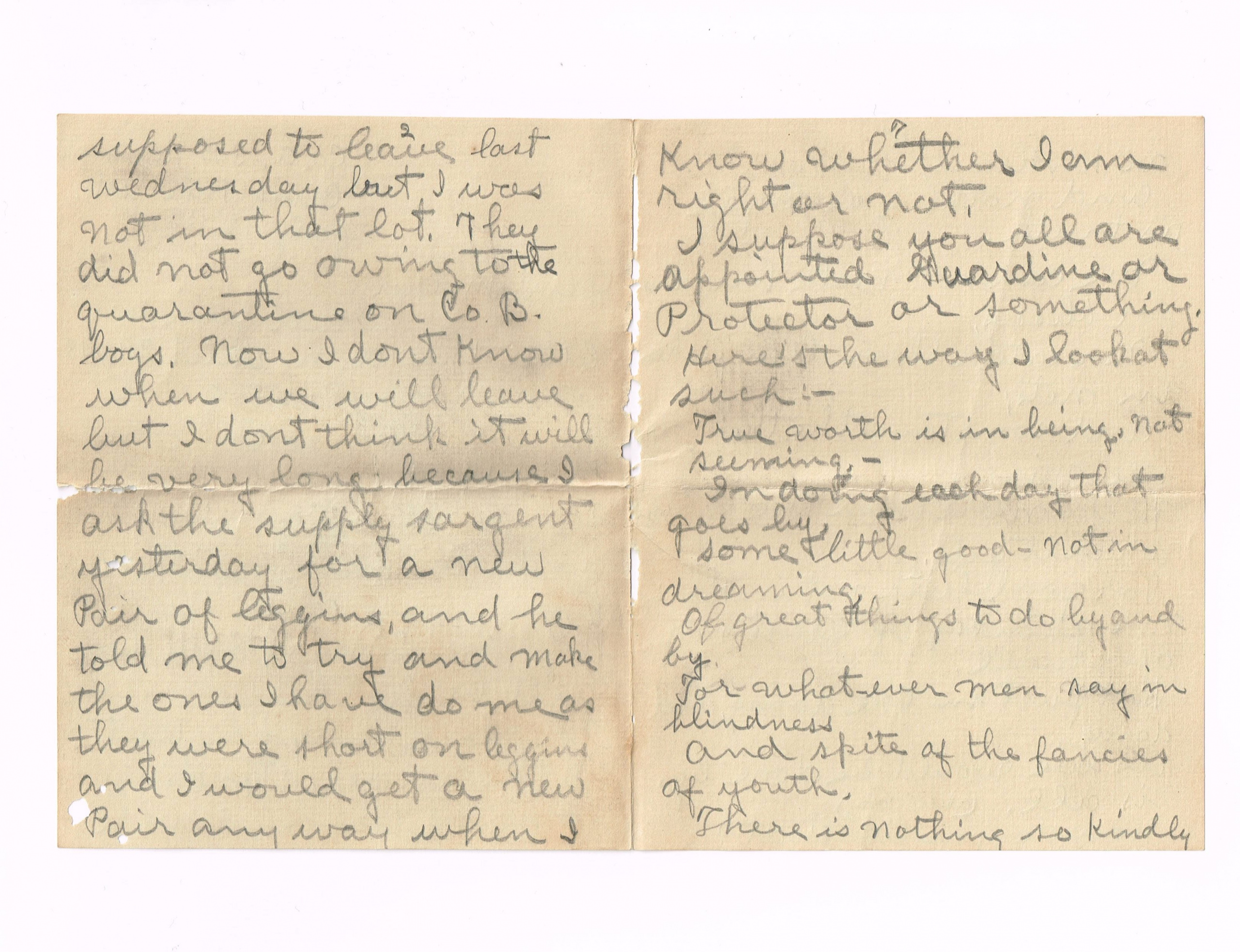 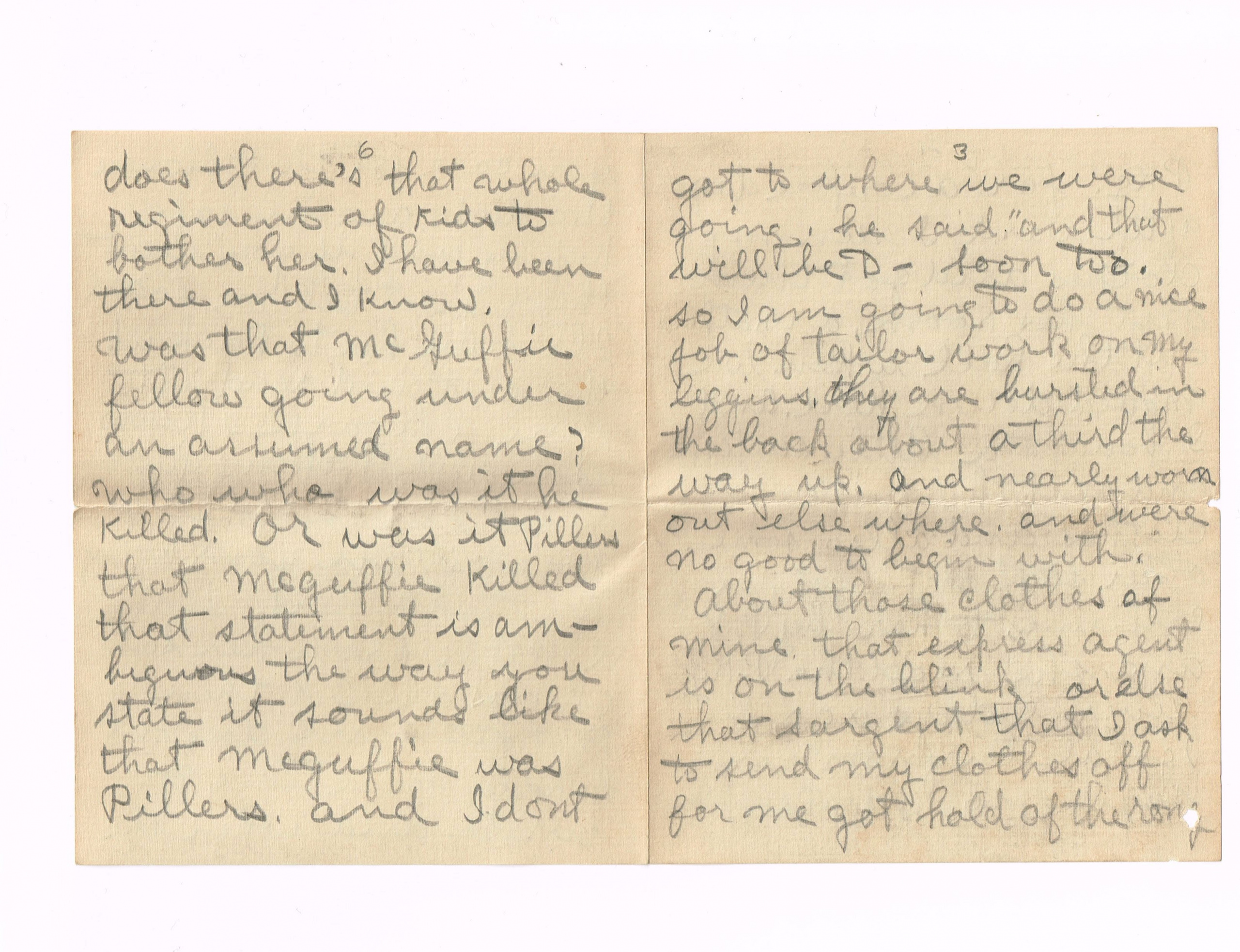 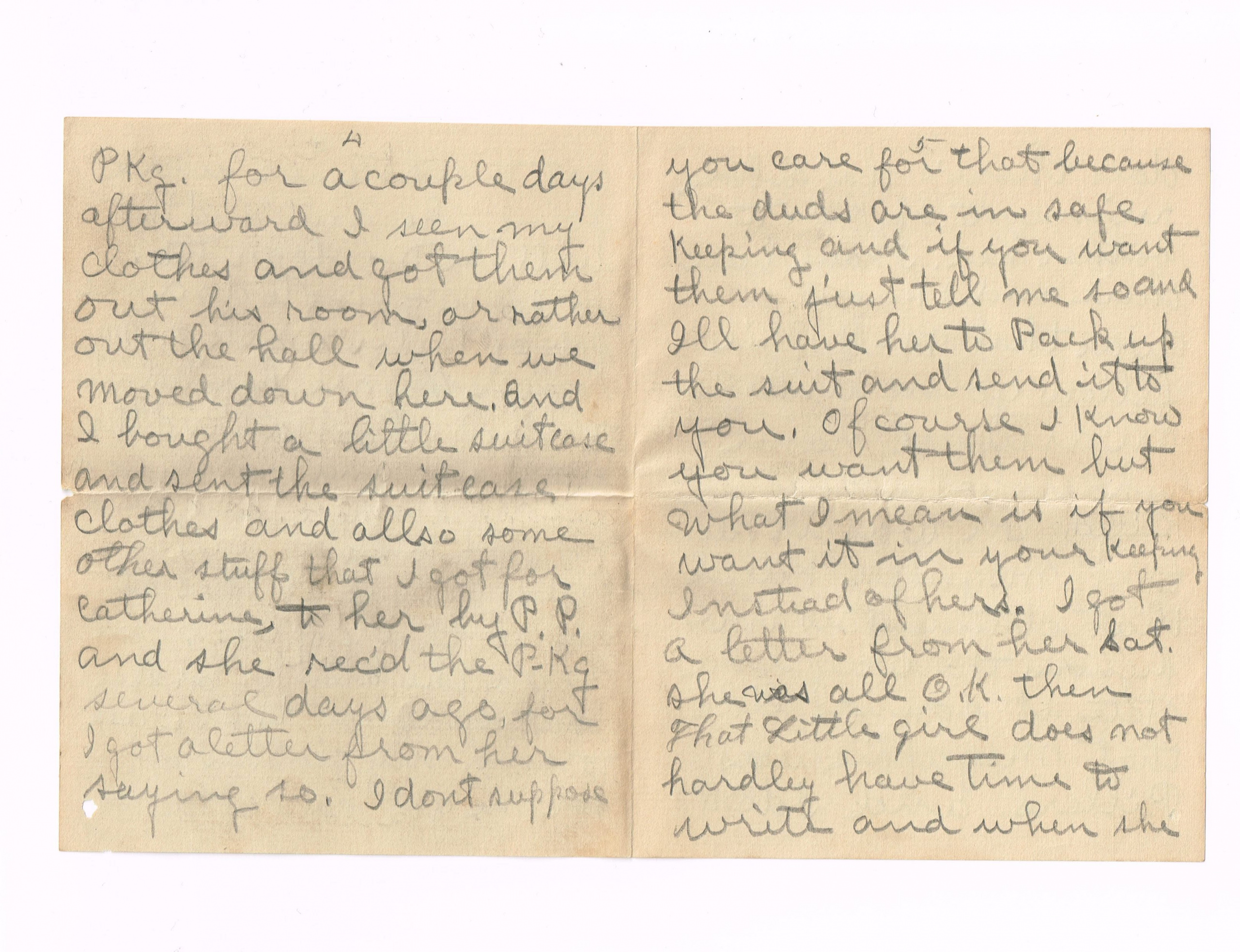 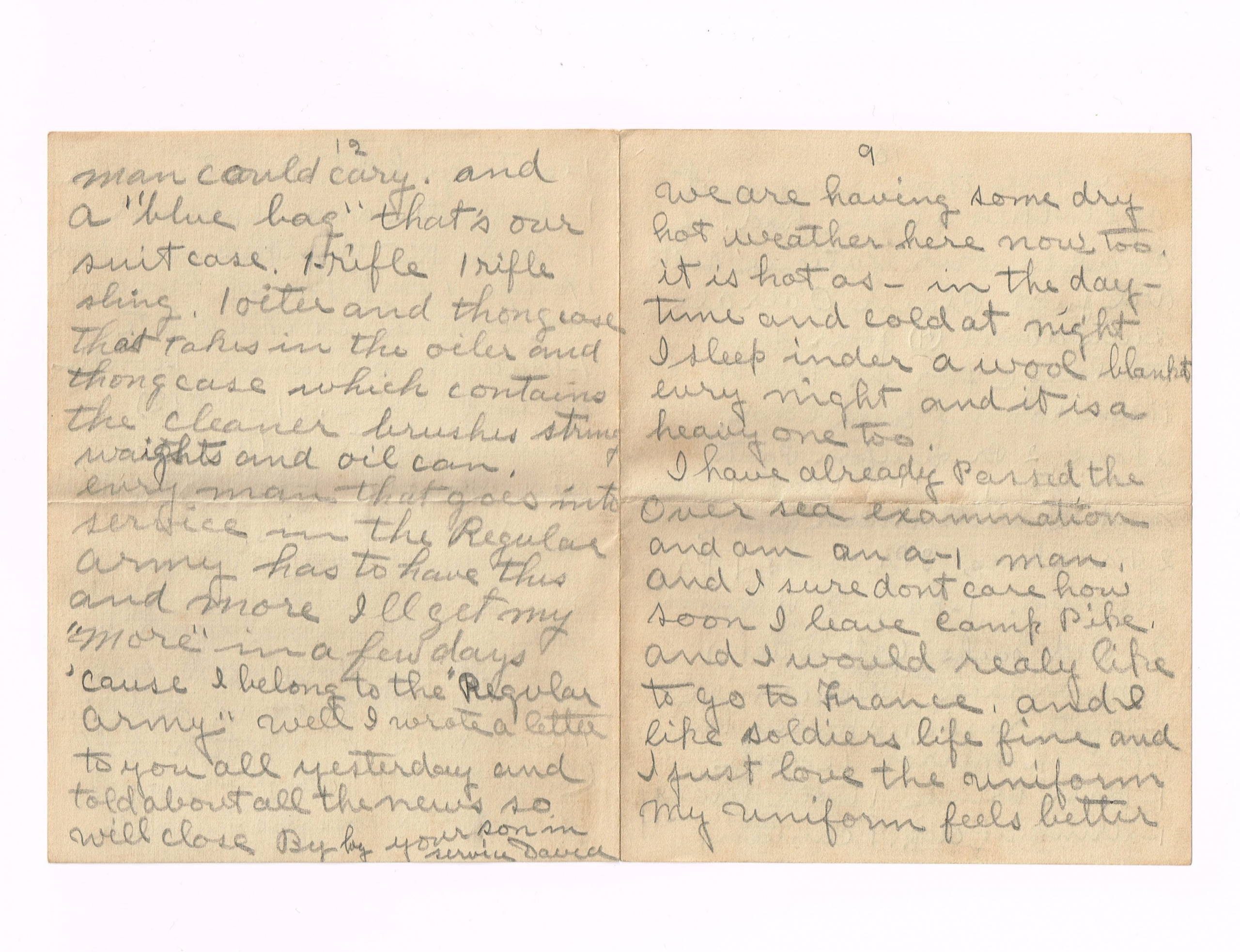 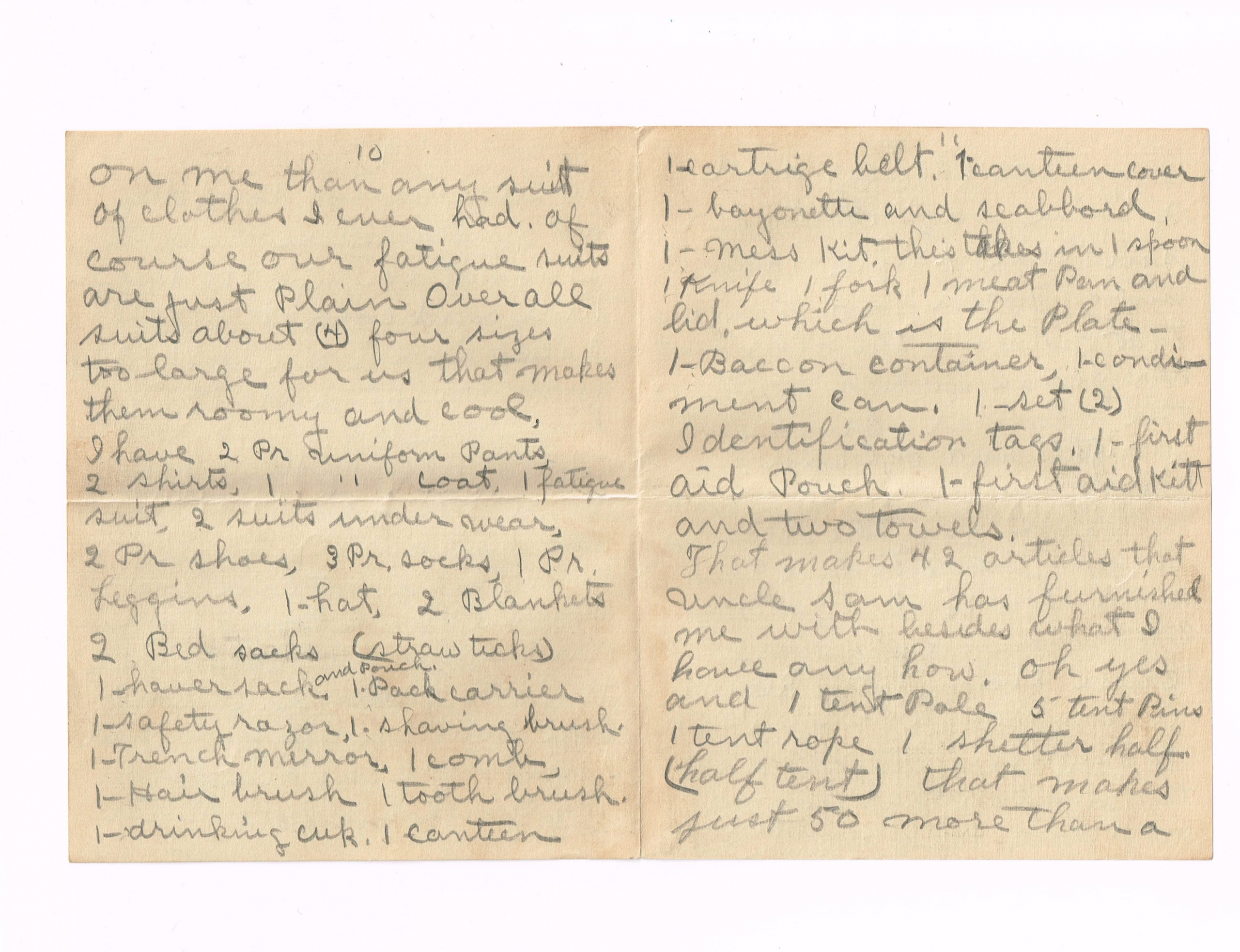 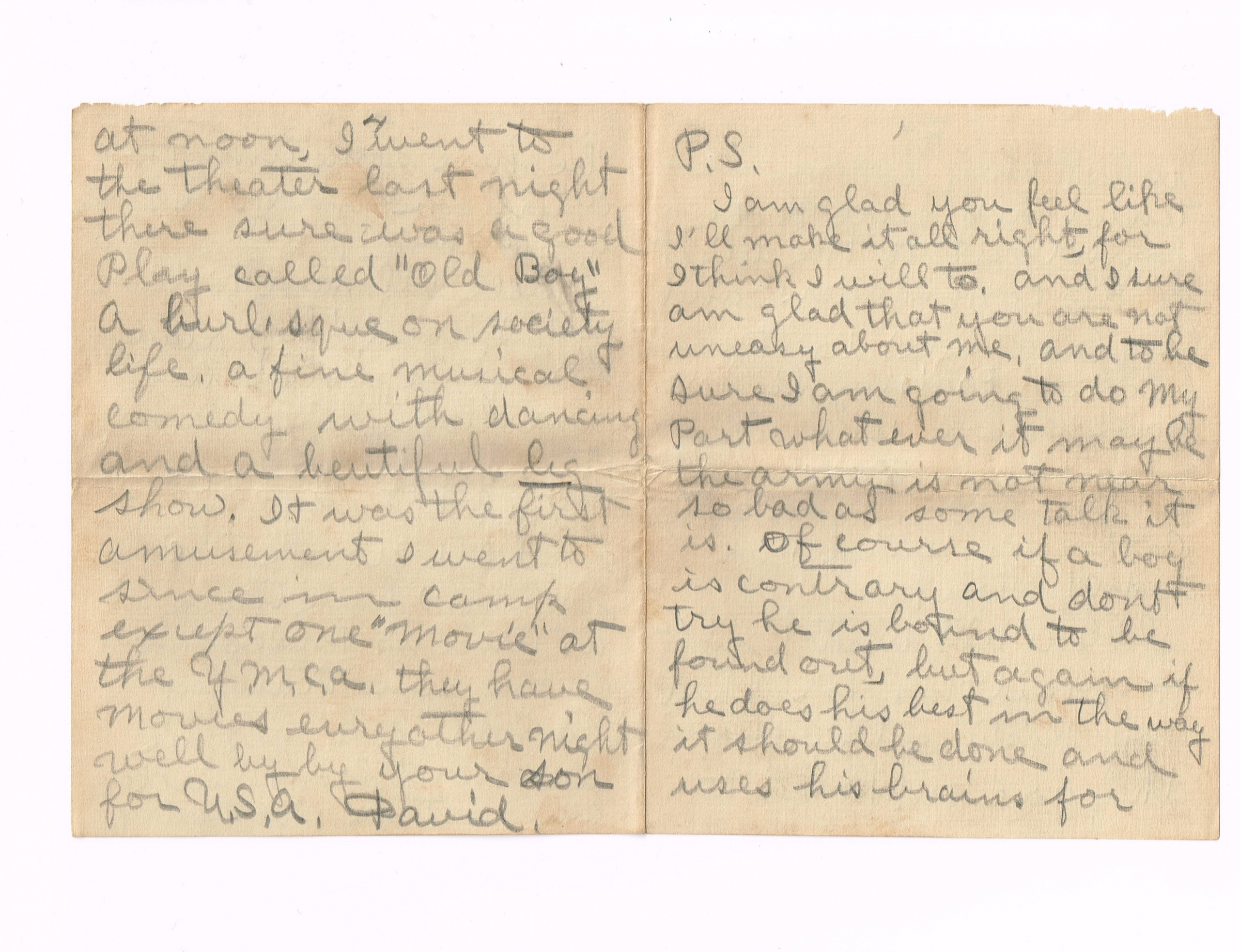 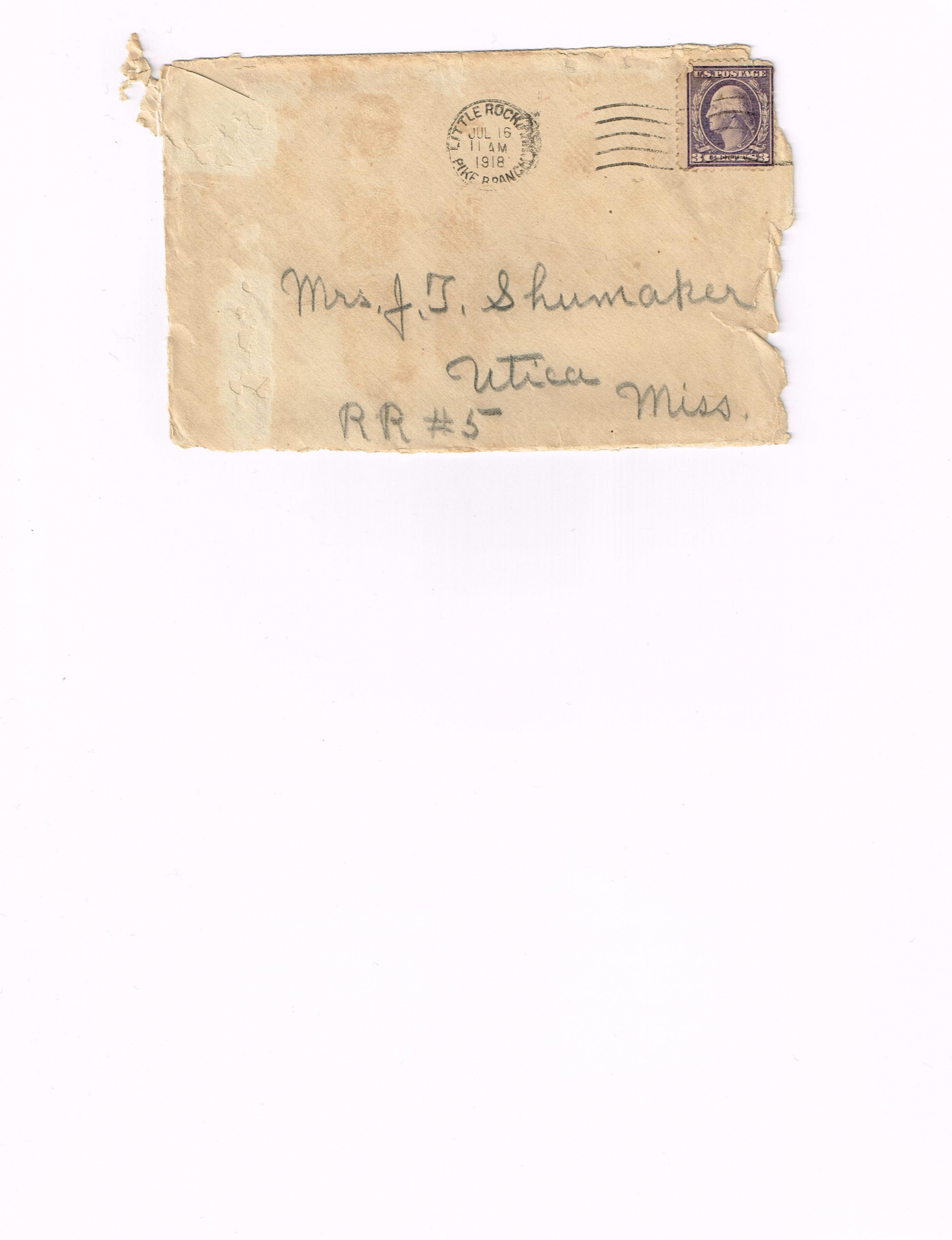 Did you enjoy this post with the WWI letter from David Jesse Shumaker to his family back home? Let me know in the comments below!