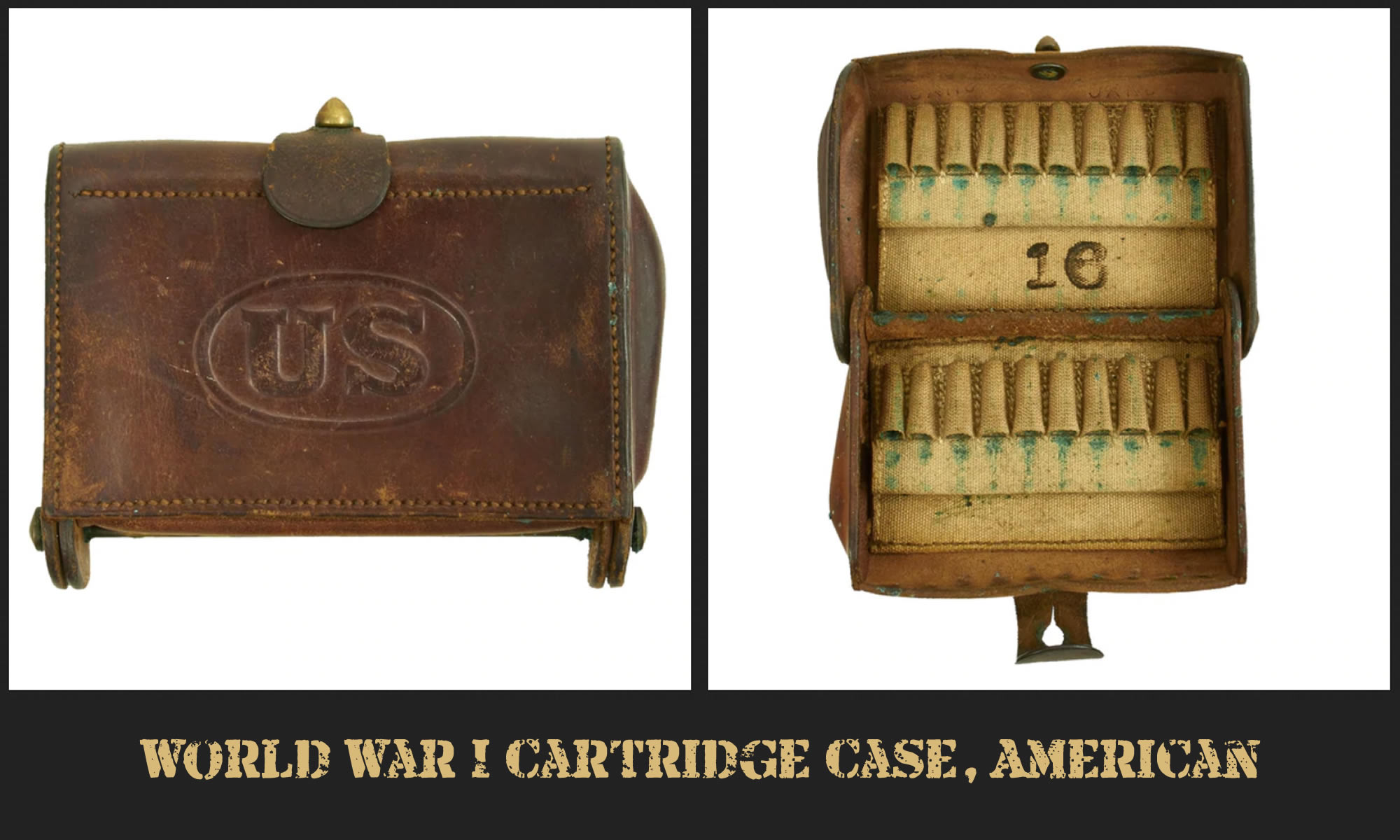 First, I had to research to see what he meant by “cartridge case”, and this is what I found: 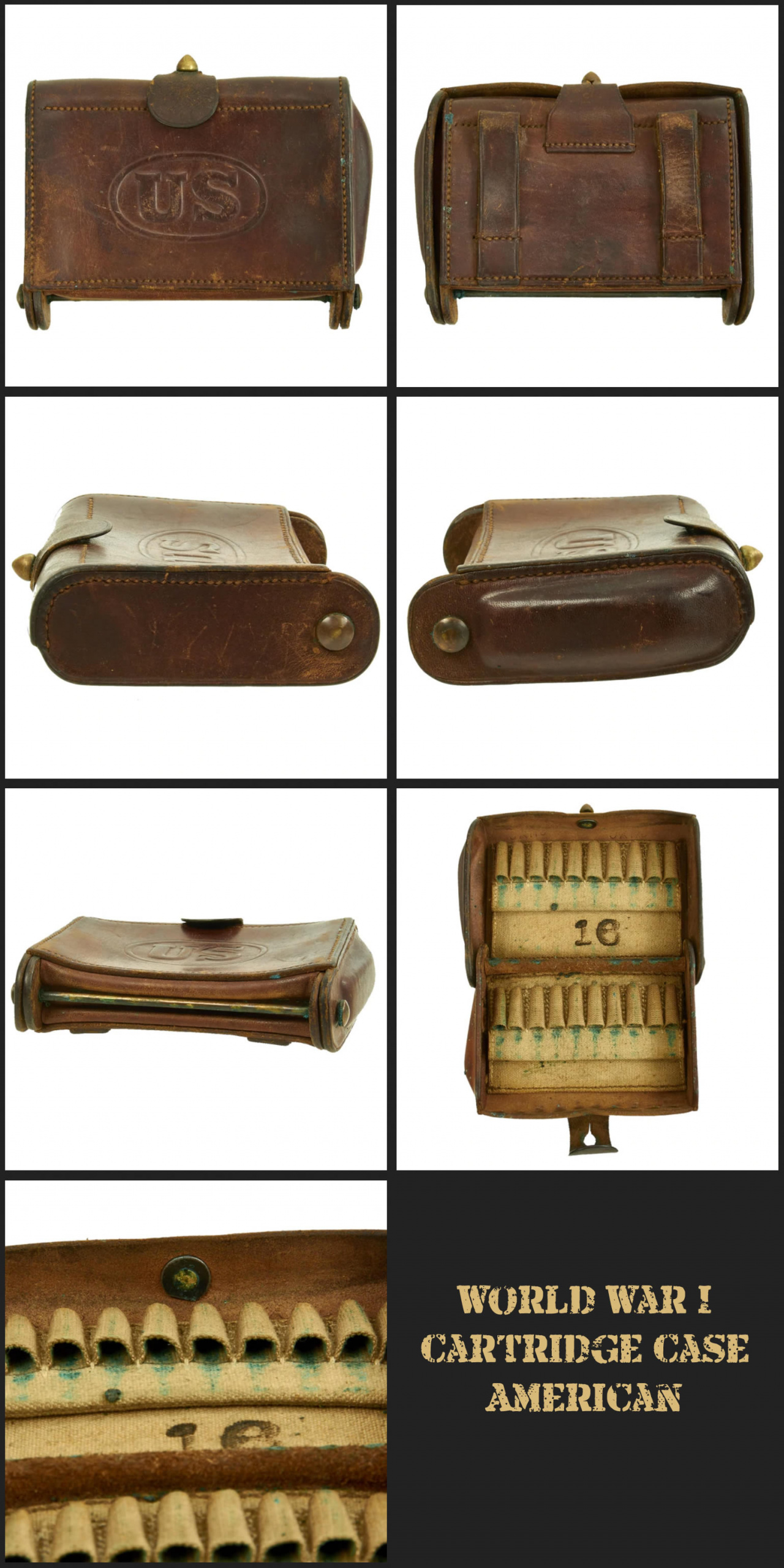 And of course, I thought that Bosch was the sound equipment company, repurposed for wartime. But no, “Bosch” was one of several of the derogatory names that our soldiers called the Germans.

This is from the WWI Slang Dictionary:

The boche’ or ‘boches’ (or ‘bosch/bosches’), with or without a capital B, was a French word, which arrived through contact with French forces in 1914, and is said to have derived from French slang caboche, meaning ‘rascal’ or ‘German’, or from Alboche, a variant on Alleman. A writer in the Western Daily Press, 15 October 1915, claimed that les Alboches developed into les sales Boches (‘the dirty Boches’), which provided the word Boches.

And, in case you don’t remember from prior letters, “Kitty” is David’s wife, Catherine Edna May Shumaker.

Hope you are all well. This leaves me feeling fine.

I just rec’d a couple letters from you all that had been lost I suppose. One was dated Oct. 7th and was from Sister at Kitty. The other was dated Nov. 8th and was a “trio” had a letter from Mother one from Sister and a big one from Kitty also four pictures in one envelope that was some fat letter all right. But the envelope was about worn out. It one of the letters was pretty well worn on the corner. But Believe me I sure was glad to get the letters also the pictures even tho they were long behind date. I think of you all all the time. And believe me I am proud to be a soldier in the U.S. Army and you all should be proud to have me in this army. Just think what a noble “cause” we were fighting for. And all the Good we represented. I am realy proud of my self.

I should not like for you all to worry about me, for I am safe and sound have all the comforts a soldier could wish for in France. And if you don’t like to think of me being in the army why just think of me as being away somewhere on some good job at work. I sure am having an easy time. The easiest time I ever had in my life. And getting more money out of it also have good Insurance and protection. To be sure I pay $6.50 a month for Insurance and $15.00 I send to Kitty. That takes $21.50 out of my $33.00 Per. Which leaves me $11.50 for Pin money. And I was a head a bit but I bought a few presents for Kitty and the rest of the loved ones.

And the French prices are some thing Fierce. I bought a small pair of scissors and had to pay 7F for the pr. That was about $1.40 in American money. Some post cards at .15c apiece .25cts French money a quarter of a Franc. & small souvenir Hand Kerchiefs cost from 2F.50 to 7F.50 and Hundreds of other souvenirs that a fellow would like to send home to the loved ones.

I have a “Bosch” cartridge case I’d like to send home or take home. And I think I’ll make it. It is quite a handy thing now for me to keep my trinkets in. Well I am ahead of my story. I did not buy the cartridge case I picked it up where some Bosch had lost it.

In the long run 62.50 don’t go very far when a boy starts out to buy stuff. With writing paper (Not YMCA) at .01c American money at .05cts French money for one sheet and envelopes at .95cts (French) a pack (There are 100cts in 1F) 1F is counted the same as .20c in our money. But the exchange only allows about 18c US to the Franc.

Now that the French money system is about the same as ours only their unit is a Franc. 1F.00 instead of one dollar $1.00. See the difference study it out to suit your self. All soldiers in the A.E.F. in France are payed in French money.

Well today is Saturday once more. And nothing to do all day but rest, eat, and sleep, if I want to. Or go wander about the village of Ruille Froid Fonds. We are some where near LeMans east of Tours. Look it up on the map. Don’t know how long I will be here. Expect to leave any day and don’t know where I’ll go from here. More than likely I’ll be transferred into a different division. Maybe not. But they say I will and I realy don’t care. If I am I’ll be raised in rank from a private to a private 1st class which will mean a raise in pay too.

The prices the Y.M.C.A. charges had a sudden drop. I guess it was because the soldiers that were arriving home gave the “Y” a bad name. They fairly “hooted” at the name Y.M.C.A when they heard it in the states when they landed. I don’t know when this division will sail. Some say it will be about three months, some say sooner and some say not so soon. In the long run I don’t believe any one knows.

I’ll not get home in time to do any thing towards a crop this year.

May get home in time to say Good bye Summer. I don’t know. But the longer I’m 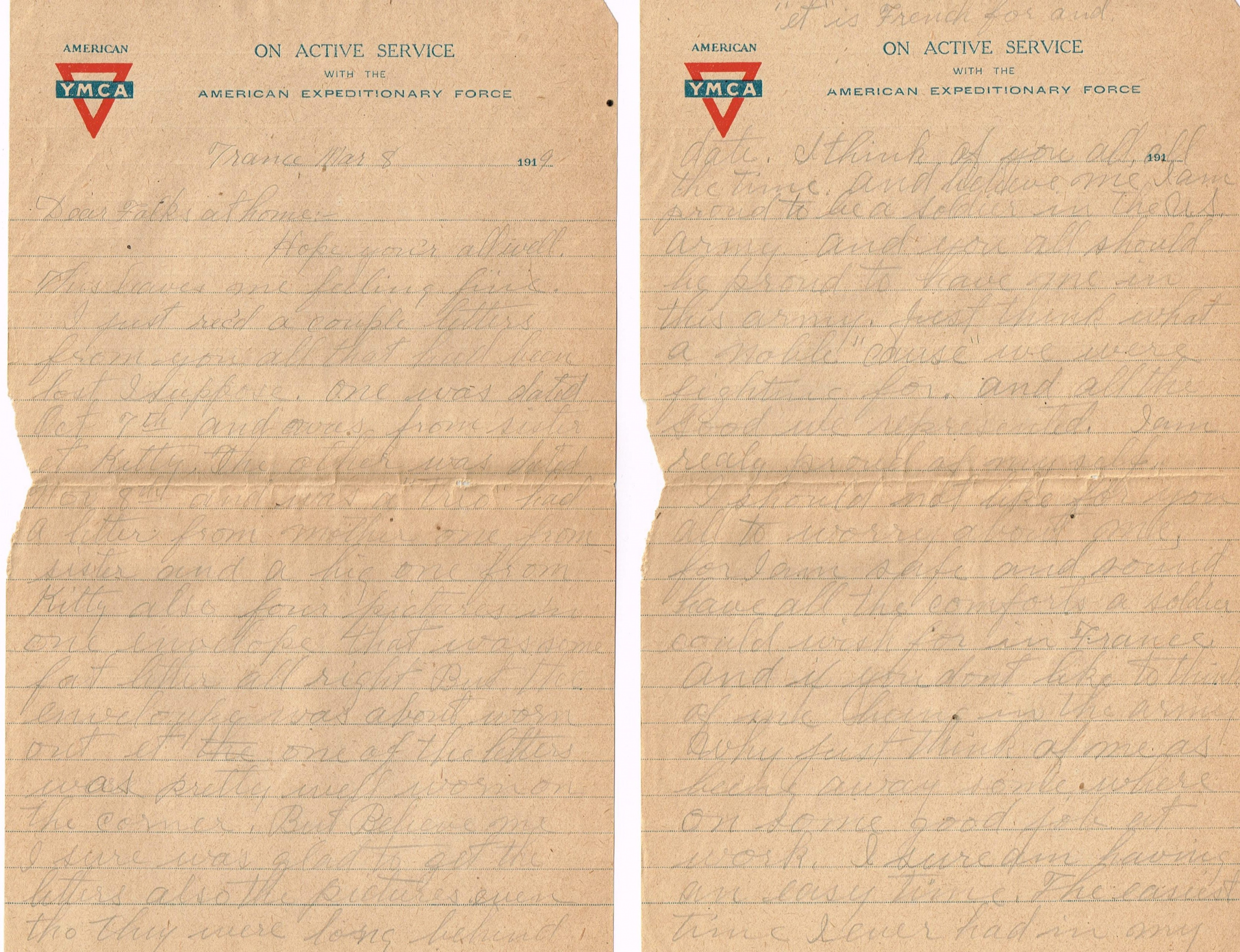 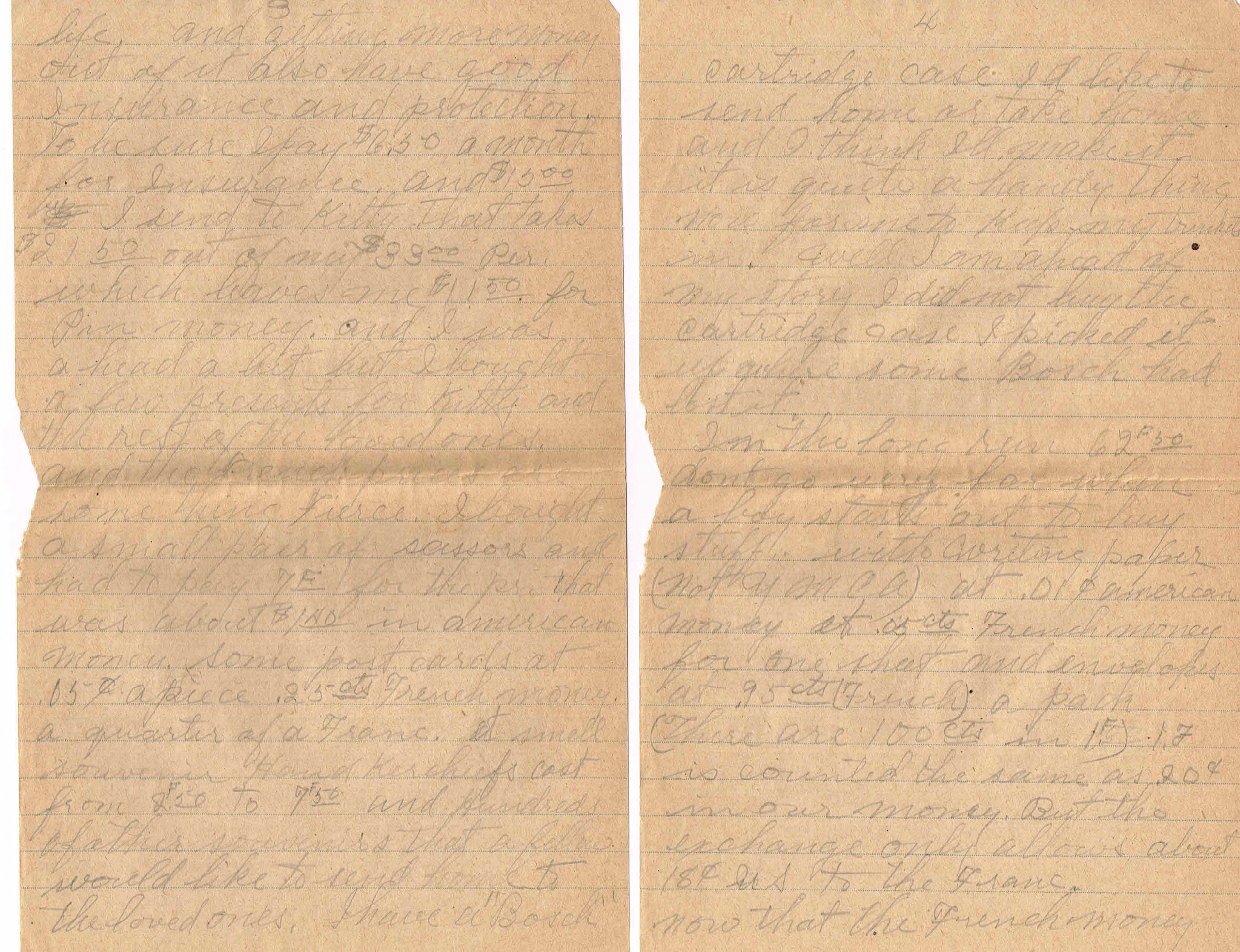 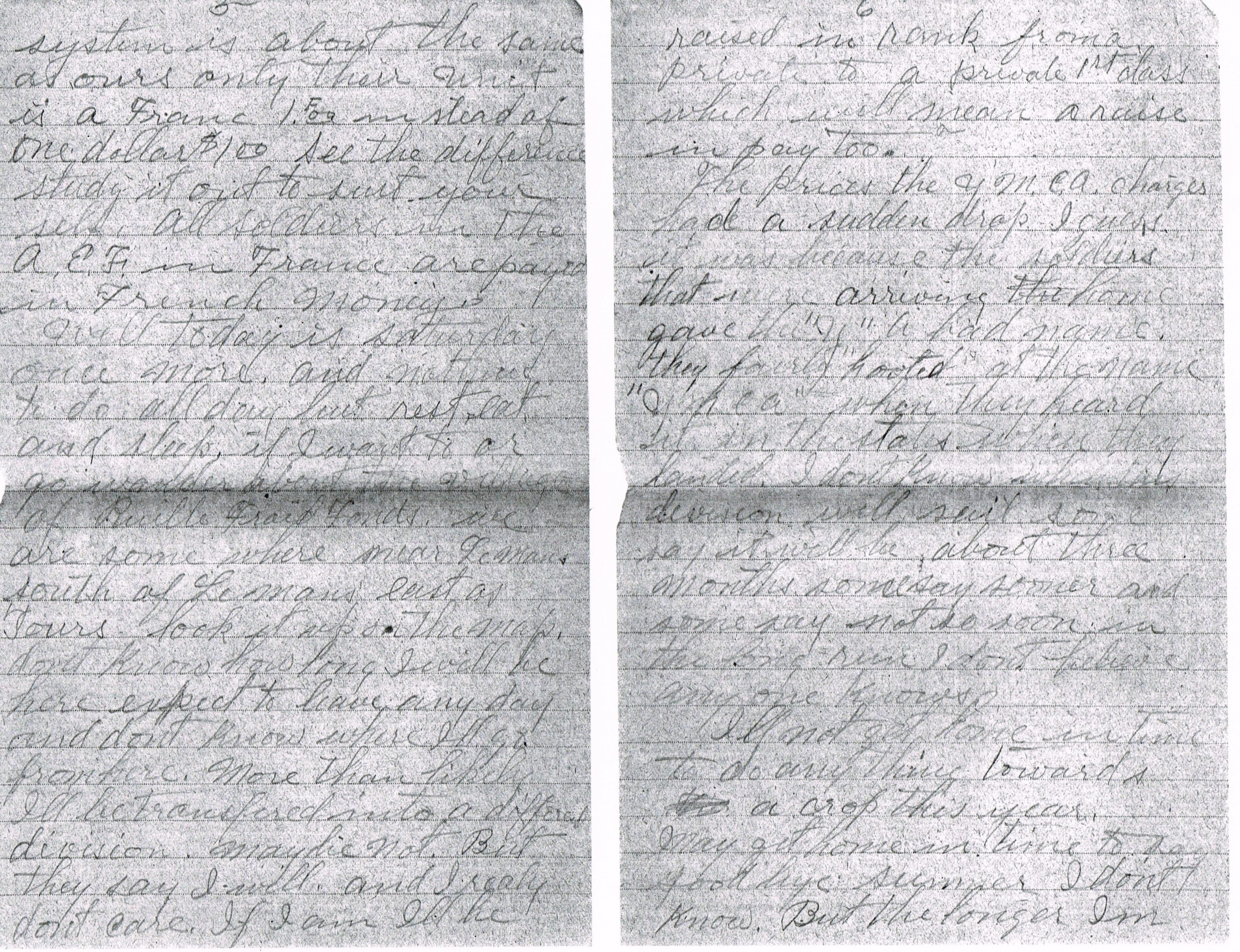 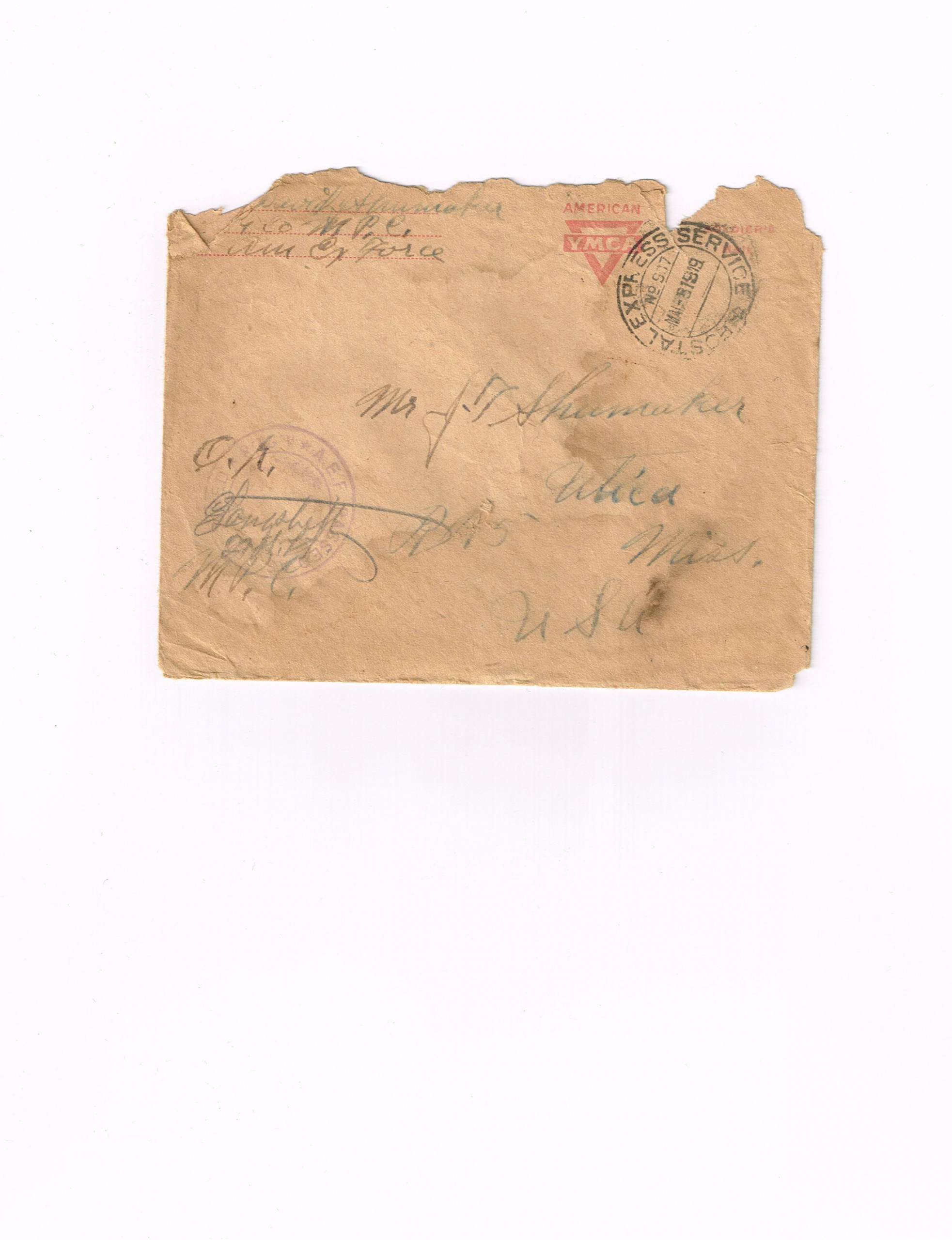 Did you enjoy this post with the WWI letter of March 8, 1919 from David Jesse Shumaker to his family back home? Let me know in the comments below!